Time for Democracy in Singapore? 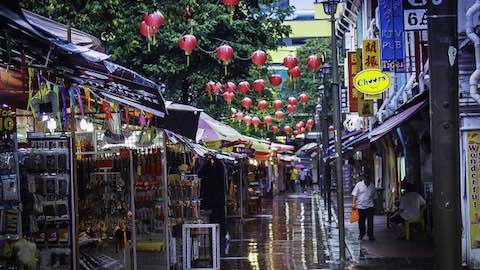 With Singapore's longtime strongman now passed away, some expect the statelet's authoritarian political culture to follow him into the grave.

The late Singapore strongman Lee Kuan Yew famously argued that Asia was no place for liberal democracy. Instead, he argued for a kind of soft authoritarianism guided by “Asian values,” where the harmony of a one-party state trumped the messiness of competitive elections.

For years, many of his peers seemed to agree.

Then, when Burma's military took its baby steps away from dictatorship four years ago, it seemed that in a region where the merits of authoritarianism and democracy had been hotly debated for decades, democracy had finally gained the upper hand.

But it was just last year that the Thai military threw out a democratically elected government, largely to the applause of the country's middle class. Suddenly it seemed that Lee might get the last word after all.

The West's Best “Man of the East”

Despite his vocal opposition to Western-style democracy, Lee -- who passed away a few weeks ago at 91 -- was also the West's favorite Asian.

For the Americans and the British, this Cambridge don's fierce anti-communism and friendly reception of their corporations more than compensated for his authoritarian proclivities. The Economist anointed him the “wise man of the East” in its obituary.

Indeed, Western investors had a privileged status under Lee, who championed a development model pushed by an alliance between foreign transnationals and the Singaporean state -- with local businesses playing a subordinate, marginal role.

Interestingly enough, when China's communists began their march towards capitalism, they saw in Lee's combination of controlled politics and capitalist economics a model in miniature of their vision for their society.

Rather than authoritarian, some suggested that a more apt term for Lee's project was “totalitarian,” given his justification of government's imperial reach into the private sphere. As he put it in a 1987 National Day rally, “I am often accused of interfering in the private lives of citizens. Yes, if I had not done so, had I not done that, we wouldn't be here today, we would not have made economic progress, if we had not intervened on very personal matters -- who your neighbor is, how you live, the noise you make, how you spit…or what language you use.”

“We decide what is right,” he concluded. “Never mind what people think.”

Others have wondered whether “fascist” might not be a better term for a hegemonic state that, according to the sociologist Manuel Castells, had mastered a process of promoting “social reform, social organization, and social control, to actually achieve at the same time political legitimation and political domination.”

For instance, Singapore's public housing program is extolled as one of the most successful in the world, with over 80 percent of the population housed in government-financed flats -- about 79 percent of which are owner-occupied. In the process, however, the slum communities that had provided the base of lower-class and ethnic resistance to Lee's People's Action Party (PAP) were disaggregated and reconstituted into artificial high-rise communities designed to facilitate technocratic and police control.

The problem with any one term is that it doesn’t adequately capture all key features of Singapore's style of governance. For instance, elections are unquestionably free, but gerrymandering and other intricate electoral rules that favor PAP constituencies ensured that with only 60 percent of the total vote, the party won 90 percent of the seats in parliament in 2011.

The House that Lee Built

Lee was no stranger to repression. “Repression is like making love,” he once said. “It's easier the second time around.”

In recent years, however, repression in Singapore has no longer been your typical heavy-handed variety of arbitrarily detaining or torturing political opponents. Everything is done under the “rule of law.” Critics are allowed to voice their criticisms, but once they cross a certain point, they find themselves facing charges of infringing tax, libel, anti-corruption, or business laws.

For example, when prominent academic Chee Soon Juan showed signs of becoming a major opponent of the People's Action Party in the early 1990s, he was was subjected to a concerted campaign of character assassination. The government even presented evidence that the professor had used university funds to mail his wife's PhD thesis to her university in the United States, which cost him his job at the National University of Singapore.

Far more effective than brute repression in taming the country's middle-class Chinese population, the PAP has found, is the threat of closing off the path of career advancement should they not toe the line. Government initiatives often carry the prospect of reward and a hint of threat.

Thus prominent businessmen and professionals are often requested to run for office as PAP representatives. This is often presented as an honor, and is usually received as such. However, those who are approached also know it’s an honor they can't refuse, since refusal would mean seeking to establish some distance from the government -- something that would arouse suspicion that they harbored private doubts or resentments toward the totalitarian PAP.

Indeed, the PAP has mastered the art of cooptation, and its success at this is often advanced as the reason Singapore doesn’t need a two-party system or a real opposition. As former Prime Minister Goh Chok Tong put it in a remarkably frank speech at the Fletcher International School of Diplomacy in 1985:

Unlike in the United States, our political talent pool is just too small for us to share equally between the two parties. Better for us to concentrate our limited talents in the main party and have it represent the broad majority of the population. It does not make sense to keep half of our best people in opposition all the time. That is why we regularly comb the length and breadth of the country for suitable candidates to stand on the governing party ticket. We even co-opt those who disagree with us on certain policies, provided they share our core values.

Many Singaporeans resent a system that denies genuine democratic competition. As one of them told a newspaper reporter, “People just get tired of living in the sixth form [12th grade in the U.S. system] the whole of their lives.”

Instead of challenging what they see as a formidable system, however, they have preferred to vote with their feet and emigrate, along with those in search of better economic and professional conditions. The city-state of nearly 5.5 million has one of the highest emigration rates in the world, and over half of teenagers surveyed responded that they would move abroad if they had the chance.

These are worrying demographics. No wonder Lee reserved some of his worst epithets for emigrants, whom he called “washouts.”

Still, the PAP feels that its “social contract” with the population -- security, prosperity, and clean government in exchange for submission in perpetuity -- remains intact.

But of these three commodities, it seems that the PAP can now only unambiguously deliver on physical security. According to the Ministry of Manpower, the real incomes for the bottom 20 percent of Singaporeans barely increased over the period 2001-2010, while median real incomes rose by only 1.2 percent per annum.

As for Singapore's famous corruption-free political culture, it’s been severely dented by several high-profile corruption scandals -- including what the Straits Times describes as “a sex-for-contracts case” concerning “a top officer in the civil defense force” and the “misappropriation of funds by a head of a branch of the Corrupt Practices Investigation Bureau.” This led Transparency International to downgrade the city-state's ranking as one of the world's least corrupt societies and contributed to the perception of 38 percent of Singaporeans that corruption has increased.

Even as many in Southeast Asia wonder whether Lee might have had the last word on the region's political future, the question on the mind of many Singaporeans is not if but when his legacy of totalitarian social engineering will follow the “Old Man” into the grave.

Lee Kuan Yew always reminded his successors that he was ready to take back the reins of power if ever they strayed from the path he had charted. With him no longer peering over their shoulders, will the current generation of PAP leaders have the courage to bring about what many of them already realize is the key to the renewal of Singapore: the genuine democratization of politics?

Is it Time for Democracy in Singapore? - Current Events in Asia