Korean Reunification: The View from the North 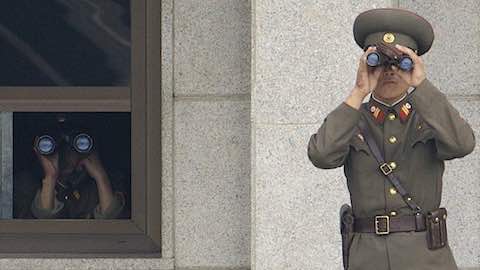 Korean Reunification: The View from the North

An unusual poll reveals what North Koreans are thinking about reunification.

Reunification, for Koreans, has a mythic quality, like the Promised Land or the Holy Grail. Most Koreans dream of reunification, of a time in the future when the North and the South will join together to recreate the Korean whole that existed before division and Japanese colonialism. It's a lovely idea, but no one has a very good idea of how to achieve it.

Our views of North Korean opinion, meanwhile, remain rather patchy. The North Korean government has made any number of official pronouncements. And North Korean defectors have given their opinions, but since they left the country it's not clear how representative their views are.

But now we have some new information, thanks to a poll of 100 North Koreans in China conducted last year by researchers from Chosun Ilbo and the Center for Cultural Unification Studies. These North Koreans are not defectors. They are spending some time in China working or visiting relatives, and they plan to return to their country. Since conducting a public opinion poll in North Korea is out of the question, this is the next best thing.

The views of these 100 North Koreans on the topic of reunification are nothing short of amazing.

In the aftermath of World War II, the two Koreas looked at the issue of reunification in an identical, if opposite, way. North Korea aspired to unify the peninsula under the banner of"our-style socialism." South Korea, under Syngman Rhee, harbored hopes of absorbing the North in a similarly military fashion.

The continued stalemate on the peninsula prompted strongmen Kim Il Sung and Park Chung Hee to explore other methods of achieving reunification. Given the structural similarities of the two countries at that point -- authoritarian politics, state-led economic development, social and cultural conformity -- finding a formula for eventual reunification was not so far-fetched. Indeed, one of the chief sticking points at that time was not ideological but numerical. Because South Korea had a much larger population than North Korea, the two sides could not agree on a political structure that could ensure both equal representation of the two sides and proportional representation of the two populations.

As North Korea descended into the famine and economic crisis of the 1990s, a different vision of reunification emerged, mainly in the South. Communist states had collapsed throughout Eastern Europe. It seemed that it was just a matter of time before North Korea, too, collapsed. Reunification would therefore happen organically -- not through military action or complicated political negotiations but, rather, when the North Korean regime collapsed and the South simply filled the political vacuum.

The North Korean system has stubbornly remained in place, and so this latest reunification scenario remains in limbo. Predictions of North Korea's collapse are still routinely made, but no one is expecting that reunification will take place any time soon.

Let's return now to the poll of North Koreans. This group of North Koreas is, of course, an unusual cohort. They have had an opportunity to travel outside their country. They've presumably had contact with foreigners and foreign ideas. They don't represent North Korean public opinion as a whole. However, the group is roughly divided between men and half women and is diverse in their age and place of residence in North Korea. Only two of the 100 had college degrees, so they do not represent the North Korean elite.

Like South Koreans, the North Koreans showed a lot of interest in reunification: 95 of them said that it was necessary, largely for economic reasons. An overwhelming number believed that they would personally benefit from reunification.

When asked about how they think reunification will take place, only eight of the 100 held to their government's position that North Korea would control the process. Only seven thought that it would take place when the North Korean regime collapses. On the other hand, 22 respondents expected that South Korea would absorb North Korea. And the vast majority expected that reunification would take place"through negotiations between the two Koreas on equal footings after reforms and an opening-up of the North."

When asked about the system that a reunified Korea should adopt, the answers were even more startling. Only 14 opted for North Korean socialism, and 26 chose a compromise between the two systems. On the other hand, 34 respondents preferred the South Korean system and 24 others didn't care which system the unified country adopts.

North Koreans, at least in this segment of the population, clearly revealed that they are not robotically following their government's propaganda (whatever they might say in public). They show a diversity of opinion, which suggests that they are thinking through things on their own. And yet they converge on a couple of different choices, which suggests that they are also having discussions with others about such questions. They don't show a great deal of confidence in the longevity of the North Korean system. But equally of importance, many are fundamentally pragmatic and don't really care what system they have to operate within.

The two governments are not talking about reunification. They're barely talking about anything. But people in North Korea are thinking about the subject just as much, if not more, than their compatriots in the South. That these poll respondents are not the intellectual elite of the country is even more startling, for it suggests that the discussions about the relative merits of the two systems are taking place across socio-economic lines in North Korea.

Most importantly, the poll results emphasize the importance of projects that give North Koreans an opportunity to engage with the outside world. Before change can happen in a country, it has to happen in the minds of its citizens. And that's obviously already taking place in North Korea.

"Korean Reunification: The View from the North"