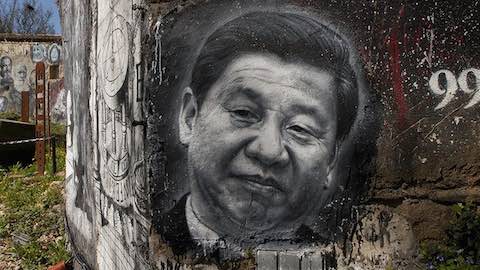 Conventional wisdom holds that the American effort to integrate China into the international order has only succeeded in generating new threats to U.S. primacy in Asia.

Admit it: the American question on "Contain China" has been changed from "Should?" to "How?" in view of the brewing consensus that the 'constructive engagement' policy since President Nixon was a mistake [Note 1].

In an originally titled "Wake up America, China must be contained" article and their March 2015 report issued by Council on Foreign Relations, Robert D. Blackwill and Ashley J. Tellis argue for a new Grand Strategy towards China because "the American effort to 'integrate' China into the liberal international order has now generated new threats to U.S. primacy in Asia -- and could eventually result in a consequential challenge to American power globally ..." [Note 2].

This is not the first wake-up call for a fundamental change. In Dec 2013, for example, at a congressional Seapower and Projection Forces Subcommittee (Committee on Armed Services) hearing, Seth Cropsey of the Hudson Institute and three other analysts jointly averred the threat from China that Asia could be lost quickly should Washington not formulate a new strategy to counteract Beijing's expansion as the Obama Administration's 'Pivot' and 'rebalance' are "not based on a strategy" [Note 3].

Some moderate pundits have tried to divert the policy orientation away from "Contain China" to boost the hope for peace. The latest effort is the Harvard Belfer Center report (April 2015) by Kevin Rudd (Prime Minister of Australia 2007-10, Jun-Sep 2013) who recognizes that U.S. "sees China as seeking to push the U.S. out of Asia" but suggests "Constructive Realism for a common strategic narrative for U.S.-China relations" [Note 4].

Nevertheless, given the imminent danger of losing the world leadership, the next President would probably ignore Rudd's voice in favor of the new blueprint to accomplish the five Grand Strategy objectives, namely, to sustain asymmetric economic advantages, to exclude China from new trading arrangements among the U.S. camp, to prevent China from acquiring advanced technologies, to strengthen the allies surrounding China, and to strengthen the U.S. military might in Asia-Pacific [Note 5].

To the U.S. allies, the real actions to be urged by Washington D.C. to take may be something like these: Israel to cease arms trade with China; England to cancel setting up a Renminbi offshore clearing house in London so as to delay the internationalization of China's currency; developing countries such as Mexico, South Africa and Egypt to cut back their China trade for gaining new preferential trading treatments from the U.S.; Japan to deploy more naval vessels to block China from exploring crude oil and natural gas under the East China Sea; France to stop Electricite de France from upgrading China's nuclear plants; Australia to reduce export of strategic minerals such as uranium and nickel by Rio Tinto and BHP Billiton to China; the Philippines to obstruct Beijing's reclamation in the South China Sea; Germany to prevent China from acquiring Siemens' advanced mechanical and electrical know-how; Saudi Arabia to supply less crude oil to China; Canada to prevent another Chinese acquisition similar to Nexen's case; India to escalate the Himalayan border dispute with China; European Union to impose tariffs on made-in-China products ranging from solar panels to shoes...

Nonetheless, before assessing how successful the new Grand Strategy may be, it is more sensible to ask how likely these countries are willing to join the White House Orchestra for playing the Contain China Symphony.

Among tons of factors for consideration by all the nations involved, a point to be highlighted here is the practical comparison on the policy continuity or persistence between Beijing's attempt to reset the rules of game through "One Belt One Road" and Washington's endeavor to implement the Grand Strategy. In short, who is more reliable?

Unfortunately, the United States' track record for its policy persistence was a bit disappointing. In the Cato Institute report 2003, Washington was criticized for failing to provide follow-through leadership after the passage of the North American Free Trade Agreement with Mexico and Canada, and failing to realize the idea of creating the hemispheric Free Trade Area of the Americas. "The Latin American countries, as a result, became disillusioned ... and many have now turned decidedly against the idea of free trade..." [Note 6]. The China policy during President Obama's tenure has also been confusing. Not only is Susan Rice's new model of major power relations Asia contradictory to Hillary Clinton's 'Pivot', but also the concept of 'rebalancing' sounds like a lurch.

On the contrary, despite all sorts of hearsay about the inter-factional power struggles, the smooth political succession from Deng to Jiang, Hu and lately Xi has to a great extent assured the world that Beijing's batches of leaders, generation after generation, are able to execute the national foreign policy consistently for a very long time horizon. Substantiated by China's gigantic monetary reserves and pragmatic motives, it is not difficult for other countries to ascertain the risks and benefits of teaming with Beijing, thus inducing close partnership based on common interests, though not on common values.

Australian Prime Minister Tony Abbott's honest confession has provided the most precise and concise description of the Chinese magnetic power. "Fear and greed" were said to be the forces driving Australia' China policy, assuming the leak of the private conversation between Abbott and Merkel in Nov 2014 is correct [Note 7]. Another salient example is Japan. Abe, after his 2014 re-election victory, has taken concrete steps to prepare Japan for benefiting from the thriving Asia by befriending China (as what I expected in Dec 2013) and India in that peace rather than war is the better element for sustaining the momentum of Abenomics [Note 8]. Therefore, it may not be that difficult to reckon the success rate of the "Contain China" Grand Strategy.

In the due course of antagonizing the Pragmatism-based perseverant helmsmen in Beijing, the Realist and Universalist analysts would eventually admit that military offensive is the only effective strategy to suppress China's rise and liberalize the communist regime respectively. However, if the policy makers are unwilling to risk their soldiers' lives for these sakes and somehow realize that China's biggest ambition is not to conquer the world but to rewrite the rules for a new global order to yield compliance by all states for getting rich altogether, then they should consider accepting the possibility of a Grotian International Society as suggested by Hedley Bull [Note 9]. This adjustment is disturbing but inevitable: "The Western countries are asked not merely the ending of their privileges, but also a reduction of their power ... As Third World countries develop their economies, their societies, their politics and their military strength and reduce or eliminate their vulnerability to Western intervention, they will create an international system, the political structure of which will be vastly different from that to which the Western peoples have long been accustomed" [Note 10].

WSJ, "Who Lost Asia? Some Americans Blame Engagement With China"

Reuters, "U.S. Republican warns of 'death by a thousand cuts' from China

National Interest, "A New US Grand Strategy towards China"

Belfer Center, Summary Report: U.S.-China 21-- The Future of U.S.-China Relations Under Xi Jinping: Towards a New Framework of Constructive Realism for a Common Purpose", Apr 2015.

See p.653 in Cato Handbook for Congress, Policy Recommendations for the 108th Congress 2003.

Keith K C Hui is a Chinese University of Hong Kong graduate, a Fellow of The Association of Chartered Certified Accountants (UK), and the author of "Helmsman Ruler: China's Pragmatic Version of Plato's Ideal Political Succession System in The Republic", Singapore: Trafford, 2013.