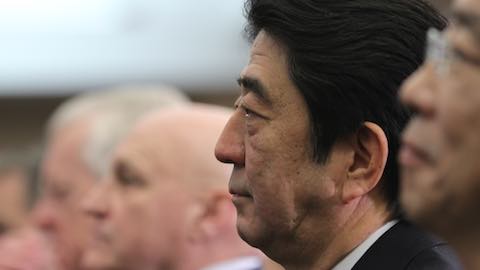 What steps should Shinzo Abe's government take to ensure Japan's long-term security and stability? John Hemmings thinks that Japan first needs to reconcile its long-standing desire for closer ties with the West and the more illiberal aspects of its national identity.

Japanese Prime Minister Shinzo Abe’s recent speeches in the United States – first at Harvard University and then to Congress last week created a storm of frenzied media speculation about the historical issues that have marred Japan’s relations with its neighbors during his time in office. In many ways, Abe’s speech stopped short of what Korea and China may have wanted, but he went much further than his critics expected, and probably further than Japan’s right would have liked. One thing is rapidly becoming clear: if Japan is to realize the foreign policy direction that Abe has set out – one based on a secure Japan – he will have to resolve the history issue in a way that is less contentious, particularly for Korea, which also a US ally and a potential regional partner.

Much of the analysis of what Abe said in Washington and Cambridge has focused on how he understands history. History, of course, is an account that people give about themselves and their ancestors. Lacking the objectivity associated with mathematics or the natural sciences, it is fundamentally a social enterprise, fluid and subjective, through which individuals and cultures attempt to construct – and impose – meaning. That meaning can change how historical events are understood, emphasized or downplayed, with neighbors contesting a common story. Because states seek to derive their legitimacy and cohesion from historical narratives, everyone is implicated in those narratives, and since modern states control the classroom, it tends to be enlisted in national projects. Japan is no guiltier of this than most countries. However, as has become increasingly apparent under Abe, that historical debate is inhibiting Japan’s foreign and security policy objectives.

The Prime Minister’s objective for Japan has been to revitalize and ‘normalize’ the country, something he believes it deserves after 70 years of good international citizenship. His trip to the United States was supposed to be about the US-Japan Alliance and the Trans-Pacific Partnership (TPP), not about his credentials on historical issues. But as he has begun to realize, the three are deeply enmeshed. Prior to the trip, Abe believed that the only way for Japan to regain its vitality and normality was to shake off the role imposed by the post-war settlement. This objective chimed with his personal circumstances, given his own grandfather’s status as a supposed ‘war criminal’. Largely, he has attempted to do this by calling for the easing of Constitutional restrictions that obliged it to depend on the US for security. This has been driven by the resurgence of Chinese power in the region and the relative decline of American power. In order to change the post-war settlement, Abe has set out to do two things: one, broaden Japan’s security relationships with other US allies; and two, change how Japanese society views the post-war settlement and Japan’s role in the war. Naturally, this has upset China – a resurgent Japan conflicts with its own regional geopolitical ambitions. However, it has also upset US ally South Korea and the US itself at times.

Abe’s nuanced and well-thought out speeches in Cambridge and Washington seemed to walk the line between accepting the post-war settlement and maintaining space for his own vision. Fundamentally, he sidestepped issues of culpability and instead chose the theme of conciliation and sorrow. This approach was also evident in the Prime Minister’s moving speech to the Australian Parliament in 2014, where his remarks were warmly received. And the line that Abe is walking is precarious: some revisionists in Japan view America with deep ambivalence. Famously, the former Air Marshal Toshio Tamogami asserted that the US ‘tricked’ Japan into attacking Pearl Harbor. This tension is sometimes evident in Abe’s liberal foreign policy vision and his attempts to overturn the post-war settlement at home. On the one hand, he has promoted closer ties with Australia, the UK and NATO on the basis of “shared values” such as democracy, human rights, and the rule of law. On the other hand, his education legislation introduced elements of political control over Japanese textbooks, with Abe asserting that Japan must reject its “masochistic view of the nation’s history”. Some have also asserted that during the Prime Minister’s tenure, there has been an increase of government influence over the press. The appointment of Katsuto Momii as Director of the NHK – Japan’s equivalent of the BBC – has not helped the overall trajectory of press freedom in the country.

Given these two worlds, the Prime Minister’s visit to Washington was a resounding success, revealing common interests as well as a desire to reconcile historical wounds between the countries. The warm welcome by Congress and many American pundits indicates a desire on the US side to deal with the contradictions of the relationship, past and present. Many in the US realize that the Japanese are not the only ones struggling with their past. Americans are still squaring up to their history regarding the Native Americans. Europeans are still trying to deal with the global impact of European imperialism. And there are many other states faced with similar issues: Turkey and Russia – quick to pass judgment on Western actions – have stunning blind spots when it comes to their own centuries of empire and genocide. China – probably Japan’s loudest critic – refuses to discuss the tens of millions killed during the Cultural Revolution or Mao’s Great Leap Forward. This is why China’s insistence that Japan address its history rings hollow to many in Japan and elsewhere.

It is not clear where Prime Minister Abe will go from here. Following his gestures at the US War Memorial, perhaps he might consider doing something similar – taking his cue from Franco-German and German-Polish reconciliation – during his next visit to Seoul. Abe showing a respectful gesture (a la Willy Brandt) at the Seoul National War Memorial would have incredible healing power for the bilateral relationship, even if such a gesture might be lost on Beijing – where isolating Japan remains an over-riding geopolitical ambition. On the home front, he might also consider relaxing his strictures on the media and education policy, allowing society more space to come to terms with history in its own time.

There seems to be a contradiction in promoting a deeply nationalistic vision of Japan at home, while attempting to promote Japanese liberalism abroad. For those that believe that rational models of decision-making pervade international relations, the Japanese history debate seems the perfect counter-example. Nationalism, resentment, and the expression of politically inflamed emotions are difficult to quantify and impossible to predict. Political leaders ignore this reality at their peril. What is most true of Shinzo Abe is that he is a complex and intriguing political leader – perhaps the most significant in Japan’s post-war period, but even he cannot control the forces of nationalism once they are unleashed. If he is to be successful, he will have to continue this delicate balance, begun in Canberra and Washington, and harmonize Japan’s search for a new national identity with the liberal values that he seems to hold dear.

John Hemmings is an Adjunct Fellow at Pacific Forum CSIS and a doctoral candidate in the International Relations Department at the LSE, where he is working on a thesis on strategic hedging, alliance structures and security policy in the Asia Pacific.