The Madness of THAAD 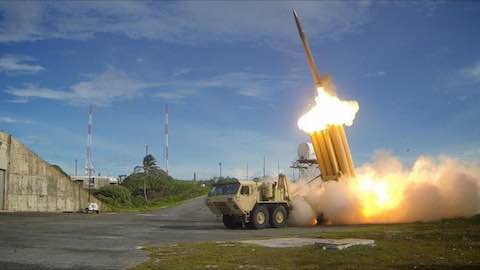 The Madness of THAAD

The US push for missile defense in Asia will only lead to more missiles and less defense.

In the annual spring ritual, the Pentagon brings its tin cup to Congress to beg for appropriations. Earlier this month, General Martin Dempsey, chairman of the Joint Chiefs of Staff, tried to explain to some bewildered members of Congress why the Pentagon required so much money when the United States already spends more than all of its potential adversaries combined.

Dianne Feinstein, a rather hawkish Democrat from California, balked at the request for $1.8 billion for a new nuclear-capable cruise missile that could strike targets a thousand miles away. Her confusion was understandable. Early on his first term, Barack Obama became the first U.S. president to embrace nuclear disarmament. But the Pentagon continues to press for more nuclear weapons.

In response to her question, Dempsey said that the missile was absolutely necessary. "Air defenses are improving around the world," he said, and "keeping that capability to penetrate air defenses with our nuclear deterrent is an important one."

The United States has probably the strongest nuclear deterrent in the world. It has many more nuclear weapons than it could conceivably need to deter other countries from foolishly imagining that they could attack America with impunity. And yet, even the Pentagon argues that the air defenses of other countries -- missile defense -- could somehow weaken the U.S. ability to deter a missile attack.

It shouldn't be that difficult for Dempsey to imagine his counterpart in Beijing making the same argument. In fact, his Chinese counterpart would have a much stronger argument to make. China has far fewer nuclear weapons and far fewer ballistic missiles than the United States. And the United States is the leading advocate of air defenses, particularly missile defense. So, it's not difficult to understand why China is particularly upset that the United States is pushing its Terminal High-Altitude Area Defense (THAAD) in Northeast Asia.

China is worried that a sufficiently robust missile defense system will lead the United States to believe that it could attack China with impunity. It's not a question of whether such a system could actually work in practice. The issue is one of perception. If the United States believes that THAAD works, it will feel less constrained about acting aggressively toward China.

Back in the "good old days" of the Cold War, arms control specialists understood that a missile defense race was just as bad as an arms race. If the United States and the Soviet Union began to pour money into what was then called ABM (anti-ballistic missile) sites, they would spur the other to increase spending on missiles to overwhelm those sites. They would then build more ABM sites. The two sides wisely concluded an ABM treaty in 1972 that limited the two sides to only one site each. The United States eventually withdrew from the treaty in 2002, the first major international arms treaty it abandoned.

The missile defense genie is now out of the bottle, and many major powers are constructing their own systems. Even China has been developing a system similar to THAAD. The architects of the ABM treaty are now seeing their nightmares come true: a continued arms race compounded by an air defense race.

The ostensible target of THAAD, however, is not China. The United States is urging its allies to adopt the system to guard against missiles launched by North Korea. At the moment, Japan and South Korea rely on Patriot missile defense -- PAC 2 and PAC 3 -- which guards against potential missile attacks at a lower altitude. THAAD would presumably defend against long-range missiles, including nuclear-tipped ones, though given the distances involved the PAC systems seem more appropriate.

North Korea's missile capabilities are certainly troubling. The recent test of a submarine-launched ballistic missile, even though a full working model is several years away, suggests that Pyongyang is not content to have just a couple of nuclear bombs to bolster its deterrence.

But the way to address North Korea's nuclear and missile programs is to sit down and negotiate limits. Here, even THAAD advocates try to sound diplomatic. They argue that China will become so uncomfortable with the degradation of its own deterrent capability that it will pressure North Korea to return to the negotiating table. It seems on the face of it a clever argument.

The problem is that North Korea rarely listens to China, particularly on military strategic issues. China has never been happy with North Korea's nuclear ambitions. It's very possible that Beijing is pursuing its own missile defense system as much to protect against what Pyongyang might do, deliberately or accidentally, as anything the United States has in mind.

Right now, South Korea is divided on the issue, with the ruling party supporting THAAD and the opposition expressing skepticism. The debate may well come down to money, since THAAD is not cheap. In this case, the opposition's resistance will inadvertently help Park Geun Hye by providing her with a stronger argument that the United States should provide the system for free instead of pressuring South Korea into giving roughly a billion dollars to military contractor Lockheed Martin for each THAAD battery.

But THAAD is a waste of money whoever is footing the bill. It has not been demonstrated to work effectively. It pushes China and North Korea to spend more money on more missiles to overwhelm THAAD (just as the United States is moved to spend more money on missile upgrades to counteract the missile defense of other countries). And it is a poor substitute for arms control negotiations. Instead of letting Lockheed Martin determine the security politics of Northeast Asia, it's crucial to bring the diplomats back to the negotiating table to address the causes of insecurity and not just the symptoms.

The Madness of THAAD - Current Events in Asia