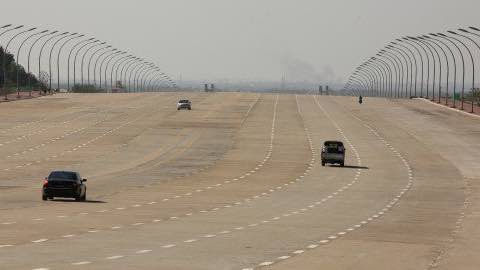 Naypyidaw isn't the first showcase city that a nation has built from scratch, but it may be the emptiest.

There are few signs of life in Naypyidaw, the capital Burma built, in part, to thwart demonstrations against the government.

In the Guardian, Matt Kennard and Claire Provost write about Naypyidaw, the grand capital city that Burma's military regime unveiled in 2005.

In recent years, the city's bizarre urban plan and strange emptiness has become something of an international curiousity.

The effect is accentuated by its size.

The scale of this surreal city is difficult to describe: it extends an estimated 4,800 square kilometres, six times the size of New York City. Everything looks super-sized. The streets -- clearly designed for cars and motorcades, not pedestrians nor leisurely strolls -- have up to 20 lanes and stretch as far as the eye can see. … The only thing Naypyidaw doesn't have, it seems, is people. The vast highways are completely empty and there is a stillness to the air. Nothing moves.

Why did the junta build Naypyidaw?

The city's origins are clouded in rumour and speculation. Some describe it as a vanity project of Than Shwe, the former military leader of the country. Many believe [it reflects] "illusions of grandeur or … perhaps another sign of [junta leader Than Shwe's] possible dementia", according to one 2006 US government diplomatic cable, released in the trove of documents published by Wikileaks.

More to the point is the authors' comment that the "grandiose boulevards were built to enable aircraft to land on them in the event of anti-government protests." They also quote from Than Shwe: Unmasking Burma's Tyrant, a book by activists Benedict Rogers and Jeremy Woodrum.

"By withdrawing from the major city, Rangoon, Than Shwe and the leadership … sheltered themselves from any popular uprising."