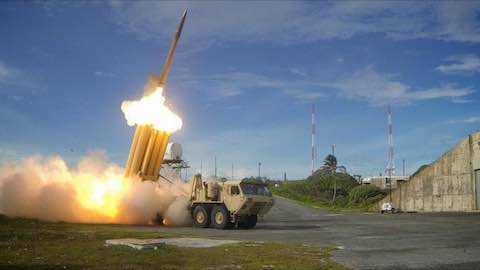 It's time for South Korea to deploy THAAD missile defense systems, argues Bruce Klingner. By fielding them, Seoul will enhance its ability to protect its citizens from chemical, biological, radiological and nuclear (CBRN) attacks and impede North Korea's ability to wage coercive diplomacy.

The interim nuclear agreement with Iran generated speculation that a similar agreement may be possible with North Korea. However, Pyongyang has made emphatically clear that it will never abandon its nuclear arsenal and declared the Six Party Talks negotiations “null and void.” Kim Jong-un and all major senior government entities have vowed to maintain North Korea’s nuclear weapons, even amending the constitution to forever enshrine North Korea as a nuclear nation. North Korea has an extensive ballistic missile force that can strike South Korea, Japan, and U.S. military bases in Asia. Enough unclassified evidence is available to conclude that the regime has likely achieved warhead miniaturization, the ability to place nuclear weapons on its No Dong medium-range ballistic missiles, and can currently threaten Japan and South Korea with nuclear weapons.

Yet, despite this growing threat, South Korea insists on exposing its citizens to a greater threat than necessary. Seoul resists procuring more effective interceptors, resulting in smaller protected zones, gaps of coverage so fewer citizens are protected, and minimal time to intercept a missile, all of which contribute to a greater potential for catastrophic failure. The Terminal High Altitude Area Defense (THAAD) would be more effective than existing South Korean systems to defend military forces, population centers, and critical targets at a higher altitude over a larger area with more reaction time than existing systems in South Korea.

Even the U.S. deployment of THAAD BMD to better protect American troops on the Korean Peninsula has been controversial due to Chinese pressure on Seoul. The Park Geun-hye Administration pursues a policy of “strategic ambiguity” in order to postpone public discussion on THAAD deployment.

Missile defense is most effective when systems are integrated into a seamless and cohesive network. Integrating South Korean, U.S., and Japanese sensors would enable more accurate interceptions by tracking attacking missiles from multiple angles and multiple points throughout the flight trajectory. Yet South Korea resists integrating its system into a more comprehensive allied network due to lingering historic animosities with Japan.

In 2014, South Korea advocated delaying the planned transfer of wartime operational control of its military forces because it felt insufficiently prepared to defend itself against North Korean attacks. Postponing the OP-CON transfer ensured maintaining a combined allied deterrent and defense effort. It would be illogical for Seoul to prefer going it alone on missile defense rather than availing itself of better interceptors and a more comprehensive allied BMD network.

China claims that THAAD deployment would be against China’s security interests. China overlooks, of course, that North Korean development of nuclear, chemical, and biological weapons and missiles went against South Korean and U.S. security interests. Is Beijing concerned that an improvement of a defensive system would impede North Korea’s ability to attack South Korea, Japan, and the United States? Or is China worried that its own ability to threaten and target the U.S. and allies will be curtailed? While deploying THAAD would improve defenses against a North Korean attack on South Korea, it would not constrain Chinese ICBM missiles. Chinese ICBM trajectories would exceed THAAD interceptor range, altitude, and speed capabilities. THAAD interceptors are designed to attack missiles heading toward the interceptors in the terminal inbound phase, not missiles flying away in the boost and mid-range phases of an outbound ICBM.

The THAAD’s accompanying X-Band radar would be unable to see or track the ICBMs. The THAAD X-Band radar—which can only see in a 90 degree arc—would be directed at North Korea, not China. Chinese ICBM trajectories would be outside of the X-band radar range. Washington has emphasized that even its homeland BMD capabilities based in the continental United States provide for defense only from a limited ICBM attack from North Korea and Iran and are not intended or scaled to affect China’s or Russia’s nuclear forces. According to remarks made by Frank A. Rose, Assistant Secretary of State for the Bureau of Arms Control, Verification and Compliance, a comprehensive U.S. defense against the larger and more sophisticated Chinese and Russian arsenals would be “extremely challenging and costly.”

THAAD would also be poorly positioned against Chinese medium-range missiles. Examining the locations of Chinese SRBM and MRBMs indicates that THAAD deployed in South Korea could help defend South Korea against a Chinese DF-15 SRBM attack from Tonghua in northeast China since those missiles would be in the same trajectory as those launched from North Korea. However, THAAD would be unable to intercept Chinese DF-21 MRBMs launched from Dengshahe, Laiwu, and Hanchang toward South Korea or Japan. The THAAD X-Band radar would have minimal capabilities to monitor Chinese missiles bound for South Korea or Japan.

Since Chinese technical objections are without merit and THAAD does not threaten China in any way, Beijing’s true objective becomes apparent—to prevent improving and integrating allied defensive capabilities. The THAAD deployment issue is a microcosm of the greater North Korea problem. Once again, China has shown itself to be more critical of South Korean reactions than to the precipitating North Korean threats, attacks, and violations. On the THAAD issue, China has taken Pyongyang’s side over that of Seoul, disregarding South Korea’s legitimate security concerns and fundamental sovereign right to defend itself against an unambiguous danger. Beijing again characteristically pressures Seoul rather than Pyongyang. In essence, China wants a role in South Korea’s national security decision-making by being able to exercise a veto over Seoul’s defense procurement decisions. China may be Seoul’s largest trading partner, but it is clearly not South Korea’s friend.

South Korea should instead articulate to its citizens—as well as the Chinese leadership—the need for a more effective missile defense system to better protect its citizens. Seoul should rebuff Chinese interference in exercising its sovereign right to defend itself against the North Korean threat brought on, in part, by Beijing’s unwillingness to confront its belligerent ally.

Deploying THAAD on the Korean Peninsula would enhance South Korea’s defense against potentially catastrophic nuclear, biological, or chemical attacks and well as impede Pyongyang’s ability to engage in coercive diplomacy. The decision to deploy THAAD is a sovereign right that Seoul should base on national security objectives and the defensive needs of the nation. To date, the Park Geun-hye administration has demurred from redressing a national security shortfall out of concern of agitating Beijing. Seoul should not subjugate the defense of its citizens to economic blackmail by Beijing. Seoul and Washington should make clear to Beijing that Chinese pressure tactics would be better applied to its ally North Korea whose development of nuclear weapons and missiles have caused South Korea and the U.S. to take defensive actions.

Bruce Klingner is Senior Research Fellow for Northeast Asia at the Heritage Foundation in Washington, DC. He previously served 20 years with the Central Intelligence Agency and Defense Intelligence Agency, including as the CIA’s Deputy Division Chief for Korean analysis.