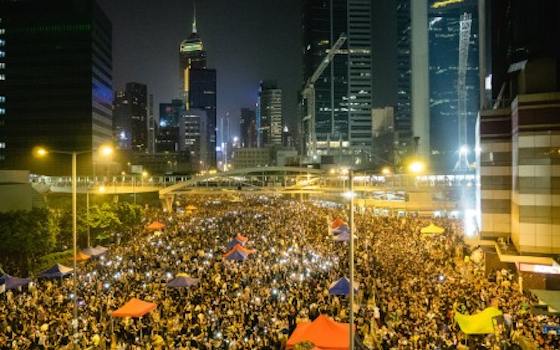 Hong Kong's protests present a major problem for China's leadership in Beijing. This is not 1989, when China used its army and tanks to dispel student protests in Tiananmen Square. Both China and the world have changed. And, most importantly, Hong Kong is not Beijing.

In 1989, China could easily control media coverage of its actions, both within China and to the world. And while there were protests in many cities, the action in Beijing was concentrated in the giant central space of Tiananmen Square, a place served by broad boulevards where one could bring large infantry formations and even tanks to bear.

Such forces were easily shifted from distant areas in northern China and deployed to the capital. After a warning, Chinese authorities could turn out the lights and send forces to disperse the students in the square, who had little recourse. China suffered some international outrage and a brief spell of sanctions, but these hardly affected its booming growth.

Indeed, within Hong Kong -- as in Gezi Square in Turkey and the Maidan in Kiev -- the adoption of harsh crowd control tactics by authorities made matters worse, provoking far more people to join the protests than had originally participated.

In China in 1989, students were demonstrating in hope of creating something new via democratic concessions from the Communist Party. Yet in Hong Kong in 2014, people are demonstrating to defend rights they have already enjoyed for decades, namely the right to peaceful protest and free expression, as well to protest the withdrawal of a promise they believed China had made to allow local elections with full and free suffrage in 2017.

Also, today's protestors in Hong Kong have been able to learn from decades of practice and international teaching in tactics of non-violent protest, including coordination via social media and cell phones to fuel "flash-mob" demonstrations in different places to evade police; use of vehicles (again coordinated by social media) to form "flash" barricades; and how to cope with tear gas and pepper spray while maintaining peaceful civil disobedience.

Today's Hong Kong protests are better organized, more dispersed, more skilled, and far better justified and clear on their demands than their predecessors at Tiananmen.

All of these factors make it almost impossible for police using ordinary crowd-control methods to disperse the protests. That would take a greater degree of military, perhaps lethal, force. Yet, the prospect of a massacre of thousands of peaceful protestors in Hong Kong by Chinese military forces is a nightmare that Chinese leaders will try to avoid.

Such a massacre would have a much larger impact today on China's economy should it result in sanctions affecting China's enormous imports and exports. It would also undermine China's efforts to position its role in organizations such as the Shanghai Cooperation Organization (SCO) and the Association of Southeast Asian Nations (ASEAN) as the harmonious alternative to the United States as the hegemon of East Asia, and weaken its efforts to appeal to Taiwan.

In fact, even in mainland China, where hundreds of protests take place every year over environmental concerns and land seizures for property development, China's government has sought to avoid use of lethal force in dealing with angry crowds. Instead, China uses non-lethal force to contain the protests; places leaders under arrest or in detention; makes some kind of deal or concession to the crowd; and disciplines local party leaders for failure to anticipate and meet popular demands.

These tactics have kept protests small and contained, and allowed China's leaders to present themselves as responsible rulers, not tyrants.

So if massacres in Hong Kong are unacceptable, what will China's government do? The mandarins in Beijing have two alternatives. One is to do nothing, and try to defuse the protest with inaction and disinterest: They may simply say they have made their decisions and the people of Hong Kong are free to express their opinion, letting students occupy the streets until the Hong Kong business community itself tires of the disruption and asks for the demonstrations to end.

That is risky, however, since even peaceful demonstrations may grow into verbal attacks on the Communist Party and on party leader Xi Jinping. These would be even more dangerous than current demands for the resignation of Hong Kong's leader Leung Chun-ying, and for open voting in 2017 for his successor. Moreover, as shown in Kiev, modern protests have remarkable staying power and can go on for months, including "pop-up" demonstrations in different locations that surprise police and create economic disruption.

The second alternative is more likely, and more consistent with China's approach to handling smaller protests on the mainland. That would be to make some concessions, arrest protest leaders, but also discipline local authorities. The leadership in Beijing could ask for Leung's resignation, blaming him for letting protests get out of hand.

They could then offer a compromise for the 2017 election, in which a committee picked by Beijing would select one or more candidates, but in which other candidates could emerge from primaries. Beijing could then use its financial muscle to back its preferred candidate, and count on the popularly-selected candidates to split the opposition vote, making it very likely that Beijing's preferred choice for Hong Kong's leadership would prevail, while still honoring the principle of open and free elections.

The real risk is if Xi views the Hong Kong protests as a test of his authority, and deems any concession to be weakness. If Xi takes that course, and confronts the demonstrations head-on, he risks a situation spinning out of control, in which his hand is forced and violence results.

Such an outcome would be terrible for Hong Kong, undermining its role as an international financial center within China boasting English-style security of law and civil rights. But it would also be terrible for China, undoing decades of efforts to present China as a beneficent, moral, Confucian authoritarian regime capable of raising its people in a peaceful and stable fashion.

Let us hope Xi and China's leadership choose the path of mixed concessions and responses that avoid a violent clash. With so many violent fault lines already in the world, and the global economy already weak, we can ill afford another major disruption.

Jack A. Goldstone is an American sociologist and political scientist, specializing in studies of social movements, revolutions, and international politics. He is the Virginia E. and John T. Hazel Professor of Public Policy at George Mason University, and a non-resident Senior Fellow at the Brookings Institution.