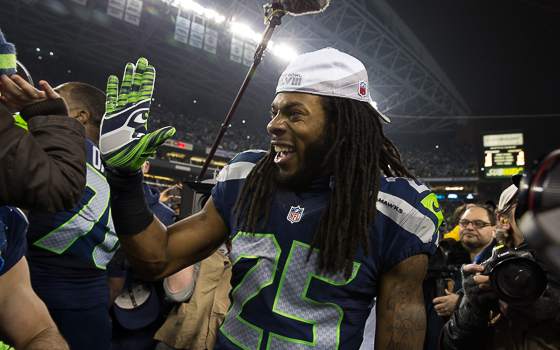 A column by Seahawks cornerback Richard Sherman in SI.com's MMQB website thanks Pete Carroll for helping him become one of the best players in the NFL

Richard Sherman still remembers the first time he met Pete Carroll. He remembers Carroll pulling him out of class when he was still attending Compton's Dominguez High School. He remembers being wide-eyed, a little starstruck even, that USC's head coach would take the time to visit.

He remembers Carroll telling him that he would make the perfect "lock-up" corner for the Trojans.

Instead, Sherman chose Stanford, citing his desire to receive a world-class education. For the Cardinal, he starred first as a wide receiver, then a cornerback, before Carroll's Seahawks selected him in the fifth round of the 2011 NFL draft.

Sherman's latest column for SI.com's MMQB website, titled, "A Love Letter to Coach Carroll," recalls his first meeting with his future NFL head coach. It was 2004.

The conversation stayed with him.

In his column, Sherman thanks Carroll for taking a chance on him when he was a raw cornerback that had yet to refine his technique. He praises Carroll's Zen-like philosophy, which emphasizes respecting players while demanding an old-school tenacity. Sherman says he has never played under a coaching staff so positive, or with a strategy, paradoxical as it may seem, so unique.

When Sherman launched a verbal assault directed at 49ers WR Michael Crabtree following the NFC Championship, Carroll was there the next day to reel him in.

In the days leading up to Super Bowl XLVIII, Sherman has been honest with reporters while mostly avoiding controversy, except for an accurate assessment of the wobble to Peyton Manning's passes. He has stayed true to his philosophy, telling all that he isn't going to be anybody's puppet. The New York media was ready for a feeding frenzy, yet Sherman gave them nothing upon which to feast.

Simply, he was himself. Last week, when the spotlight was at an all-time high, he said he didn't know how to be anybody else.

Carroll, despite two 7-9 seasons to begin his tenure in Seattle, has shown the same trait.

Here's a snapshot of what the national media is saying about the Seahawks with the big game two days away:

MMQB founder Peter King predicts the Broncos are going to win, 27-24, because Manning can identify the few receivers that can get open against the Seahawks' No. 1-ranked pass defense.

Carroll and Broncos coach John Fox shared the podium Friday at a joint news conference in what will be the final time they address the media before the Super Bowl. The biggest news to come out of it was Fox saying that Broncos executive vice president of football operations John Elway ripped the team following Denver's 40-10 preseason loss to the Seahawks Aug. 17 at CenturyLink Field.

The matchup between Manning, who loves to change the play at the line of scrimmage, versus the Seahawks defense, is being dubbed "the ultimate chess match." However, it may be a lot more simple, writes Tom Pelissero of USA Today.

Anybody looking to bet big money on the game may want to rethink their strategy. Las Vegas oddsmakers, whose livelihoods depend on correctly handicapping the winner, are having issues choosing who's going to win. >As of Friday Morning, a majority of sportsbooks had the Broncos as 2.5-point favorites.