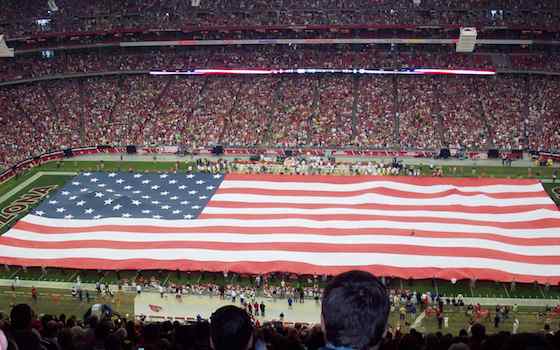 Pro football is the most popular sports category in America for the 30th straight year, according to a survey taken this month by the Harris Poll among fans aged 18 and over.

The National Football League topped the survey with 35 percent of votes, followed by Major League Baseball with 14 per cent.

The NFL has bested MLB for the number one spot since 1985 when the poll was first conducted.

The difference between the two categories was a mere percentage point (24 to 23%) back then. But interest in baseball has since dropped as the NFL experienced a huge rise in popularity.

The current 19 percent differential is the second largest gap between the two sports caregories in the almost 30 years this survey has been conducted. The highest gap was in 2011 at 23 points when 36 percent said professional football was their favorite sport and only 13 percent chose said baseball.

In the 2014 survey, college football came in third with 11 percent, followed by auto racing with 7 percent, the National Basketball Association with 6 per cent, National Hockey League with 5 percent and college basketball with 3 per cent.

All other sports are favorites for 2 percent or less of sports fans.

Conspicuously missing from the list is professional golf, which peaked in popularity during the pro career of Tiger Woods beginning in 1996.&#160;

The survey revealed that those who live in rural areas (44%), people with a child under 18 (42%), and Easterners (39%) are more likely to say professional football is their favorite sport, while those with a post graduate degree (24%), Echo Boomers (31%), and Liberals (31%) are less likely to do so.

More southerners call college football their favorite sport, while those with a high school education or less tend to gravitate to auto racing.&#160;