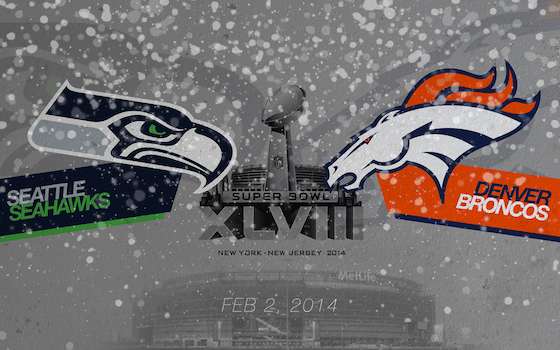 Two teams. One game. It all comes down to this.

For only the second time in the past 20 seasons, the game will feature the No. 1 seed in each conference (Super Bowl XLIV: New Orleans vs. Indianapolis in the 2009 season).

"It doesn't happen like this too often when both No. 1 seeds make it," says Seahawks Pro Bowl cornerback Richard Sherman. "It's a testament to the hard work of both teams and I'm sure it's going to be a fantastic game."

"We wouldn't have it any other way," says Sherman. "They're an unbelievable record-setting offense with a Hall of Fame quarterback [Peyton Manning]. That's as tough as it gets. The No. 1 defense against the No. 1 offense."

The Broncos led the NFL with 606 points scored while the Seahawks allowed a league-low 231 points.

Since the 1970 merger, this is only the fifth Super Bowl -- and first since 1990 (Super Bowl XXV) -- in which the league's highest-scoring team faced the club that allowed the fewest points.

Denver topped the NFL by gaining 7,317 total yards (457.3 per game) while Seattle allowed 4,378 (273.6 per game), the fewest in the league. This is only the second Super Bowl since the 1970 merger matching up the league's top offense against the NFL's best defense in terms of total yardage.

"It's the Super Bowl, so it's going to be tough," says Denver Pro Bowl tight end Julius Thomas. "Nothing is going to come easy. This is for all the marbles, so I'm pretty sure it will be a tough game all around."

In the NFC Championship Game, the Seahawks erased a 10-point deficit and then held on for a 23-17 win over the division-rival 49ers.

It marked the seventh consecutive NFC Championship Game decided by seven points or fewer, the longest such streak in NFL history. Pro Bowl running back Marshawn Lynch rushed for 109 yards and a touchdown to spark the offense and Seattle's vaunted defense forced three turnovers, including an interception in the end zone with 22 seconds remaining to seal the win.

"That's the way we've played the whole season," says Seahawks defensive end Michael Bennett, who had a sack, a forced fumble and a fumble recovery in the game. "These guys are relentless. All we do is practice turnovers on defense and we wanted to be in that situation where the game was on our backs."

Lynch, who is the only player to rush for at least 1,000 yards and 10 touchdowns in each of the past three seasons, has four 100-yard rushing performances in six career postseason games, including both games in 2013. Quarterback Russell Wilson has won 27 games -- including the playoffs -- in his first two seasons and can join Kurt Warner, Tom Brady and Ben Roethlisberger as the only quarterbacks to win a Super Bowl in his first or second season.

"To get to the Super Bowl, we're excited about it," says Wilson. "But at the end of the day, we haven't done anything yet. We won the NFC West, which was one of our goals. We won the NFC Championship Game, which isn't easy. But only one team gets the prize. That's what we're focused on and we're moving on to play the Denver Broncos."

"As a competitor, you always want to play the best," says Thomas about the Super Bowl matchup. "We're here to play. We love football. We know what's at stake. We know this chance is rare. I'm excited about this."

The Broncos advanced to the Super Bowl with a 26-16 win over the Patriots in the AFC Championship Game.

Denver makes its seventh Super Bowl appearance, one shy of the record held by Dallas and Pittsburgh. Peyton Manning completed 32 of 43 passes (74.4 percent) for 400 yards with two touchdowns and no interceptions for a 118.4 passer rating in the victory. It marked only the fifth time in NFL postseason history a quarterback threw for at least 400 yards without an interception in a game.

"It's an exciting feeling," says Manning about advancing to the Super Bowl. "You take a moment to realize that we've done something special here and you certainly want to win one more game."

Manning, who was named the MVP of Super Bowl XLI with Indianapolis, can become the sixth player in NFL history to win multiple Super Bowl MVP awards. JOE MONTANA was named Super Bowl MVP three times and TERRY BRADSHAW, Brady, ELI MANNING and BART STARR have each won it twice.

"Peyton Manning is a Hall of Fame quarterback," says Russell Wilson. "I have a ton of respect for him. I love him to death. He's a great person and obviously a great football player."

This year, Manning set NFL single-season passing records with 5,477 yards and 55 touchdowns, becoming the first player in league history to pass for at least 5,000 yards and 50 touchdowns in the same season. He is the fourth quarterback to lead the league in passing yards and touchdowns and advance to the Super Bowl joining DAN MARINO, Warner and Brady.

During the regular season, Denver scored 606 points, becoming the first team in NFL history to score 600 points in a single season. The Broncos also are the only team in NFL history to have five players each score at least 10 touchdowns in the same season: wide receiver DEMARYIUS THOMAS (14), running back KNOWSHON MORENO (13), tight end Julius Thomas (12) and wide receivers ERIC DECKER (11) and WES WELKER (10). The offense averaged 457.3 yards per game and 340.3 passing yards per game, both the best in the league.

"We've spread the ball around so well all season, so it's hard for teams to know who to key on," says Manning. "On any given play, a number of guys could get the ball. That puts pressure on a defense."

Head coach John Fox, who guided Carolina to Super Bowl XXXVIII, is the sixth head coach to lead two different franchises to the Super Bowl. He knows the challenge that awaits the Broncos in playing the Seahawks.

"They're a great football team," says Fox about the NFC champions. "(Seattle head coach) Pete Carroll and his staff have done a terrific job."