NFL Players: 85 Percent Would Play in Super Bowl Even with Concussion 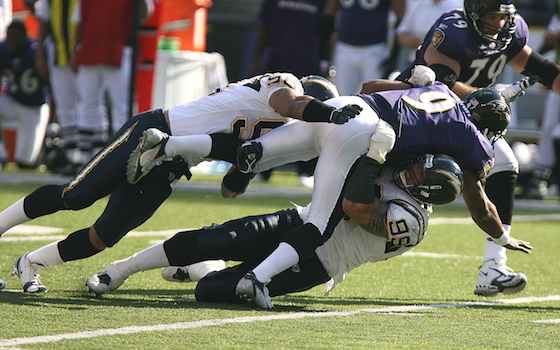 About 85 percent of 320 NFL players said they would play in the Super Bowl even with a concussion, according a poll conducted by NFL Nation.

Among them is Tennessee Titans safety Bernard Pollard, who never left Super Bowl XLVII despite suffering six broken ribs on the first play when he was still with the Baltimore Ravens.

"They want to go out there and play, not thinking about, 'OK, what can this affect later on down the line?'" he added.

For Washington Redskins linebacker London Fletcher, who just finished his 16th and probably final NFL season and never missed a game, the situation would depend on the severity of the concussion. Fletcher had a concussion during training camp in 2012 and missed a preseason game.

"If it's something where I'm having just a few symptoms and can hide it from the trainer, then yeah, I would do it," he said. "With some of them, you get in a game and you can't play," he said.

Meanwhile, Green Bay Packers rookie running back Eddie Lacy, who missed a game earlier this season with a concussion, said would not risk playing with such a "serious injury."

"It depends on if I was able to focus," Lacy said. "Then I would probably play or go back in. But that's a serious injury to play with, so I probably wouldn't chance it."

The NFL has made it tougher for players to return from a concussion with daily tests they must pass.

The protocol is one reason 60 percent of the players polled said the NFL is committed to player safety, with rules changes designed to eliminate hits on defenseless players.

However, Fletcher isn't sold on this notion, pointing to the withholding of information in the past regarding concussions.

"Some of it's more to protect themselves from lawsuits," he said. "A lot of that is just to make themselves look right from a public opinion standpoint. I don't know if they're truly committed to player safety."