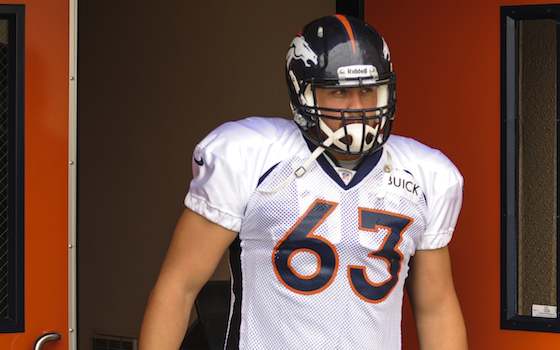 After putting his team through its final full practice of the season on Friday afternoon, Denver Broncos coach John Fox declared his team ready to go for Super Bowl XLVIII.

The Broncos used the indoor field at the Atlantic Health Center Training Center for their one-hour, 25-minute practice after Fox determined that the outdoor synthetic field was too hard.

Yet the regimen came with another twist: Fox used the outdoor field for the 30-minute walkthrough before the practice, allowing for more exposure to the type of wintry elements that will be in play on Sunday night at MetLife Stadium.

"I just wanted to see what shape the field was in," Fox said. "We came back in here, just for the same reason as yesterday. It was a little too hard, so we came back in."

As was the case after the two previous full practices this week, the Broncos didn't suffer any injury setbacks. Of the 53 players on the active roster, defensive tackle Sione Fua was the only non-participant. Fua is nursing a calf injury and is listed as doubtful for Sunday's game. All other players are probable, and none were limited in Friday's work.

"I feel good about where we are," Fox said. "Our guys have worked hard all week, and the preparation's been good. Excited to play the game."

The team will have a walk-through session on Saturday at the Super Bowl game site.

Friday's session -- part of which was observed by team owner Pat Bowlen, who stood along the sideline -- could be described as spirited.

During team drills pitting the starting offense and defense, and in others with the starters facing scout teams, players cheered, jeered, whooped and hollered, pending the outcome of any given play.

As Fox talked after practice, a handful of players provided background noise as they engaged in post-practice banter in the end zone.

Such camaraderie might also explain the diversion that came during the walk-through, when a small aircraft flew over the field with a message banner that read: "MEET BRONCOS AARON BREWER TONITE AT TIME SQUARE" (sic)

The plane flew over the field twice, and was reminiscent of a similar stunt that highlighted special teams captain Keith Burns when the franchise last played in a Super Bowl, in 1998.

"It was a little gag," Fox said. "They have no more appearances. That was just to gag him a little bit."

Fox said that he has been pleased with his players' professionalism and focus. He said the team has not had a single case of any players breaking curfew this week.

"I couldn't ask for more, for the way they've done it," Fox said. "We've been on par. Very focused."

Still, after Friday's practice, there were still more than two days before Super Bowl XLVIII kickoff.

With the practice work completed, Fox is hoping that players will strive for an even sharper focus.

"We talk about the mental preparation," Fox said. "They're going to continue to go through their playbooks, iPads, whatever information source they have, and continue to review. Now it's mostly just reviewing and visualizing what their job is."

To minimize distractions, the Broncos will leave the Jersey City hotel where they have quartered all week -- and where family and guests of players are staying -- and move to another hotel on Saturday and remain sequestered overnight.

But first there will be the matter of visiting MetLife Stadium for the walk-through session on Saturday. The visit will be more about checking out the environment than fine-tuning strategy.

"Depending on the security and all, we're not going to see a whole lot," he said. "I've got a feeling, if it's like past Super Bowls, they'll be doing all kind of work around there. They're probably not going to show a whole lot."

Fox has been pleased by the level of practices during the playoff run, noticing fewer mental errors. He suspects that comes with the more repetitions that players get as the season progresses.

The sessions this week have only bolstered that belief.