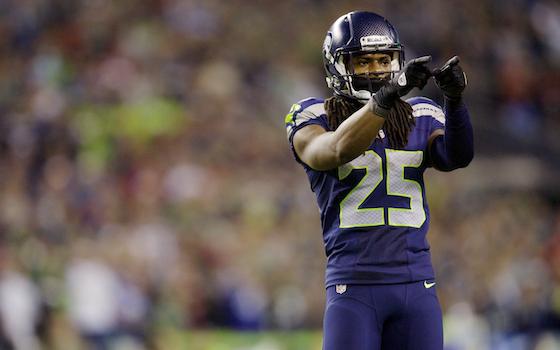 Richard Sherman's rant brought him from the margins to the white-hot center of American pop culture. Seahawks coach Pete Carroll has to reel him back

Premium athletes well-coached, in a ferocious third seasonal match of rivals in one of the world's great sports venues, rich with spectacle, controversy, ghastliness and jubilation, sledge-hammered away until the sprawling epic was decided in the final moments by a spectacular defensive play.

If the word majestic is fair to use to describe a game, the NFC Championship Sunday was it.

Except the game has slipped into shadow because of post-game tumult. It was more startling than the game. So intense, it minted a new word, a verb.

Richard Sherman (shurmn), v. — To utter or express with extravagance (typically on global television) extreme displeasure that inspires public discourse on sportsmanship, race, culture, education, psychology and the end, or start, of civilization.

Usage: In a blog post Monday on the city of Portland's official site, Steve Novick, a city commissioner, fired back at the Oregonian newspaper for remarks critical of the council's work. Entitled "Going Richard Sherman on Oregonian," Novick wrote in part:

" . . . So far, the members of the City Council have kept a dignified silence. But after watching Richard Sherman's post-NFC championship game explosion the other day, I've decided, the hell with that. Let's have some fun. If the Oregonian wants to trash-talk, let's trash-talk. Let's give the fans something to talk about. Because we can do it better than they can. We can out-trash-talk the Oregonian on the field, off the field, or in an alley.

"You want to talk about mediocre? A paper that only delivers four times a week, now that's mediocre . . . "

The maker of the NFC Championship's decisive play is now the maker of phrases. Not merely the foe of Fox and the scarin' of Erin (actually, Ms. Andrews appeared to hold up OK in the interview), the face of the Seahawks is now the oracle of the oppressed, the annoyer of the anointed. And to others, he is a lout and an ingrate.

To go Richard Sherman on someone or something is to unleash wrath when it is not expected, but when it is readily seen.

The final moments of the game had an audience in the U.S. of more than 60 million, who saw the Seahawks cornerback and the NFL interceptions leader tip away to a teammate a potential touchdown pass to San Francisco's Michael Crabtree. That all but ended the game and began the awkward, larger story that attempted to divine sociological import from Sherman's now-famous rant.

Wherever one lines up, there is little debate that Sherman is the greatest purveyor of sports timing since quarterback Joe Namath in 1969 predicted that his upstart New York Jets would beat the Baltimore Colts in what was Super Bowl III.

Namath proved right. And he will be forever remembered for brashness of his words as well as his deeds, because he said it when the sports world, and many others, were listening. Then, and now more than ever, the Super Bowl provides the fastest route from the margins of American culture to its white-hot center.

But Sherman's circumstance is different than Namath. Sherman hurled invective at a beaten opponent, and gave a choke sign to 49ers quarterback Colin Kaepernick. In team sports, that's poor form.

In that way, Sherman is like Muhammad Ali. The great boxing champ taunted and belittled his opponents before and after fights. For some reason, I cannot forget a bit of doggerel Ali tossed at his longtime rival, Joe Frazier.

In 2012, a few reporters were quietly chatting up Sherman at his locker at the Seahawks' practice facility in Renton when he disclosed that one of his principal sports heroes was Ali.

Since then, I've watched Sherman with different eyes, seeing how he easily accepts media contact, and understands how compelling a story are his athletic feats, personality and background — a kid from the cruelties of Compton, CA., son of a garbage collector and a teacher who works with the disabled, who graduated at the top of his high school class and made it to through Stanford.

Besides a surpassing confidence in his athleticism, as Ali had, Sherman also has Ali's strong beliefs and a calculated recklessness. From his post-game confrontation with New England quarterback Tom Brady ("You mad, bro?") to his TV confrontation with ESPN personality Skip Bayless ("I'm better at life than you") to Sunday's blurt that so scared the Fox TV director that he broke away from the interview, Sherman is a perambulating creator of memes, T-shirt slogans and rebelliousness in the corporate rigidity of the NFL.

The biggest difference between Ali and Sherman is circumstance — Sherman is in a team sport. Unlike a boxer, golfer or tennis player, Sherman owes some of his success to others, and their demands for some cooperation and selflessness.

That's why, Seahawks coach Pete Carroll was able to walk back Sherman from the precipice of jeopardizing the team. Smart as Sherman is, he's not as smart as Carroll in protecting the Seahawks' shield. He talked Sherman into apologizing through a couple of media outlets for blowing up his personal triumph while obscuring the team — not for busting on Crabtree.

"This is a very emotional kid," Carroll said. "It's what drives him, and I understand that. We did sit down and talk about it, because I wanted him to present himself in his best light. He's an incredible kid. He's got great sense about things, understanding, sensitivity and awareness. He cares. He's a very thoughtful person.

"He was really clear that the last thing that he wanted to do was to take something away from our team and what we had accomplished."

Carroll deployed his credibility as a national champion college coach and a Super Bowl coach to talk up to a national audience Sherman's lesser-understood virtues, then made it seem as if Sherman came to the notion himself that he inadvertently hurt the team.

It was a masterful manipulation of the narrative that, to that point, had millions of older white fans frozen in place when unexpectedly confronted with a black man in a nearly falsetto voice raging about a moment of disrespect that none of them understood.

Then Carroll laid in the final curve to bring back the narrative.

"What I am the most is, I am the dad," he said. "I looked at it like he was my son, in a sense. ‘What would I tell my son?' I said, ‘There is some stuff (in Sherman's post-game statements) that I think that you should think about. Did you really want it to come out the way that it did?' (We) talked our way through that, and he didn't want that. He didn't feel right about that."

Sherman can wait to play Ali on "Saturday Night Live."