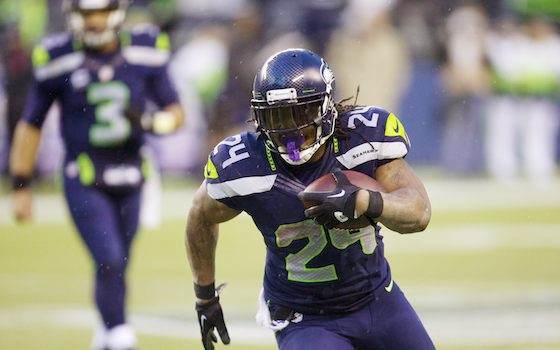 Running back Marshawn Lynch was one of 61 Seattle Seahawks -- the entire active roster and practice squad -- practicing in the indoor fieldhouse of the Quest Diagnostics Training Center Thursday evening. Lynch sat out Wednesday, his usual rest day, but was back on the practice field today in a full capacity, running hard during team drills and even shouting along to the old '90s rap song, "Sideways."

"He's fine. That's a routine day for us on Wednesday," Seahawks coach Pete Carroll said after another 90-minute unpadded practice. "That absolutely helps him. We found a good rhythm for him during the course of the last couple years. Resting him on Wednesday really helps him get ready for the ball games."

Receivers Doug Baldwin (hip) and Percy Harvin (concussion) also had no limitations; Harvin ran quickly and with a spring in his step. Defensive tackle Brandon Mebane (ankle) was off to the side during part of the warm-up and drills period--appearing to adjust the taping on his foot or his equipment--but he took part in team drills.

"Everybody is fine. No issues at all," Carroll said. "It's fantastic to have everybody going, knowing that everybody is healthy. Of course they're excited about that, too. We're very fortunate in that sense."

The NFC Champions conducted their second full practice of Super Bowl XLVIII week inside the fieldhouse at the Giants' practice facility again (where the Giants' four Super Bowl banners hang). The Seahawks took the field at 4:30 p.m.--special teams players came out at 4:15 p.m.--and wrapped up by 6 p.m. Asked about practicing indoors again, Carroll quipped, "It's really dark outside."

Carroll added, "The turf is really good, hopefully much like it will be at game time, and it was plenty cold enough today." The outside temperature was 28 degrees, and the Seahawks again opened five doors on the sides of the fieldhouse to let in the cold air.

After "Competition Wednesday" yesterday, this was "Turnover Thursday," and the Seahawks defense came out on top. Cornerback DeShawn Shead intercepted a pass in 7-on-7 drills for the lone turnover.

"The defense won. They got their turnover today," Carroll said.

The defense was energetic and boisterous, swarming Shead after his interception and jumping around after every play that was broken up. The offense was more serious. When the first-team offense was not on the practice field, quarterback Russell Wilson was often conferencing with offensive coordinator Darrell Bevell, quarterbacks coach Carl Smith and his receivers--using their hands to diagram plays in the air and on the artificial turf. Wilson threw a long touchdown pass during 11-on-11 drills against the scout team.

"Today, we're finishing up the game plan," Carroll said. "Our third-down stuff today was a big deal. But the whole day is really dedicated to the ball; it's a turnover day for us. So we're working on that all day long."

The Seahawks bussed over from their Jersey City hotel at 11:30 a.m. They had meetings, a 45-minute walkthrough in the fieldhouse, lunch and then practice, where the music selection included Jay-Z's "Empire State of Mind" and Fort Minor's "Remember the Name." After dinner, they were headed back to the team hotel.

Several members of the FOX broadcast team -- including Troy Aikman, Joe Buck and Pam Oliver -- were in attendance at practice. GM John Schneider came in around 4:50 p.m., wearing gray sweats, and he walked off the field after practice laughing and joking with right tackle Breno Giacomini. One position group broke its huddle by chanting, "1, 2, 3, Super Bowl!"

"The guys are really excited about the game," Carroll said. "They're practicing with great focus and attention to the details. And so we go to Friday and try to put together a really good day on Friday, finish really sharp, and head into the weekend. We're ready to go."