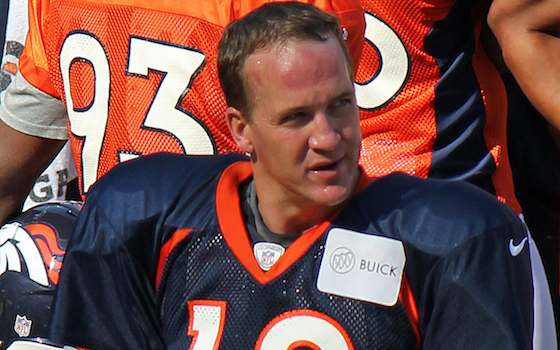 The Denver Broncos moved their full-scale Thursday afternoon practice indoors today at the New York Jets Atlantic Health Training Center after head coach John Fox determined that practicing again on the frozen synthetic turf field outside -- as they did on Monday and Wednesday -- might increase risk and wear-and-tear.

"We just came indoors because it was softer," Fox said after Thursday's one-hour, 45-minute practice, which was preceded by a 30-minute walk-through.

"So, really, it was more for the players' legs more than anything. The field got a little hard yesterday."

Fox emphasized that the shift had nothing to do with the weather, which wasn't as challenging as it was on Wednesday. It was 26 degrees outside, with a mild wind and wind-chill factor of 18 degrees when Thursday's practice began, according to Weather.com.

"It was actually way nicer today than it was yesterday," Fox said.

On Wednesday, the wind-chill was estimated at 9 degrees at the end of practice.

While working inside, Fox had the doors opened to allow a blast of cold air to circulate throughout the facility.

The Broncos are hoping to use the outdoor field for Friday's practice. By late Thursday afternoon, the outdoor synthetic field was covered by tarp -- with blowers underneath heating the playing surface.

"They're going to heat it up a little bit," Fox said, "Kind of like they're doing at MetLife now. We'll be back out there tomorrow. The issue we found yesterday was with the snow the night before, the field was a little harder."

With weather looming as a potential X-factor for Sunday's matchup against the Seattle Seahawks in Super Bowl XLVIII, Fox is monitoring the field conditions at MetLife Stadium. On Wednesday, kicker Matt Prater and punter Britton Colquitt worked out at the Super Bowl site. Fox said the feedback about the field was positive.

There are no heaters built into the surface at MetLife Stadium.

"They're doing whatever they can to keep it from freezing," Fox said.

A few players -- including Peyton Manning -- still managed to get in some work outdoors on Thursday.

During individual drills, Manning and backup quarterbacks Brock Osweiler and Zac Dysert hustled outside for a few minutes of drills.

Prater, Colquitt and long snapper Aaron Brewer also conducted some work outside on Thursday, although like the rest of the team the bulk of their work came indoors.

In all, the Broncos had another spirited practice on Thursday without pads -- in helmets and shells.

There were no injury setbacks, and after practice Fox presented the exact same injury report as he had the previous day: Of the 53 players on the active roster, the only non-participant was defensive tackle Sione Fua.

"It was a typical Thursday in-season practice," said Fox. "We had a great mind-set and great energy. We still have more preparation, and we'll continue with that and go from there."

Fox visited briefly during practice with team owner Pat Bowlen, who watched the bulk of practice from the sideline.

The Broncos had something to observe during practice, too, if they so desired. Large black-and-white images of the greatest figures in Jets history -- including Joe Namath, Curtis Martin and Weeb Ewbank -- hang on the far wall.

The biggest image, though, is of the Lombardi Trophy that the Jets won in Super Bowl III.

How fitting, with the Broncos hoping to add to their franchise's collection on Sunday.

Fox surely noticed the banner of the championship trophy.

All week, he has talked of trying to establish a routine that is as close to normal as possible, given the demands of the Super Bowl and extended period at home.

As was the case for Thursday's practice, they've had to adjust and adapt to some situations. While practicing and having weightlifting sessions at the Jets headquarters, they are having team meetings that the team's hotel in Jersey City.

And they are even trying to make the most of their travel time. The bus ride to the team's hotel takes from 30 to 40 minutes from the Jets headquarters.

Enough time to watch practice video on their iPads.

"With the technology today, they're able to download the practices immediately," Fox said. "The players and coaches will view the practice on the way to the hotel."

That must be a quiet bus ride.

Quipped Fox, "Yeah, it is, other than someone saying, 'What the heck were we doing on this play?'"