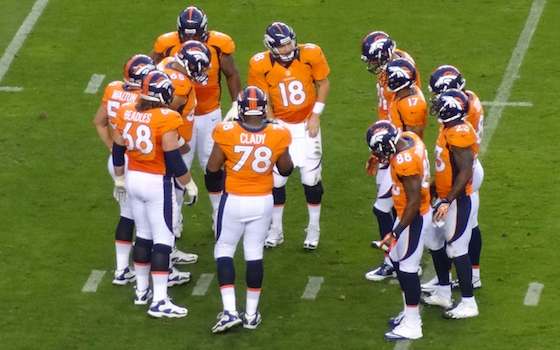 With a stiff wind and chilly temperatures providing a fitting backdrop, the Denver Broncos put on the pads Wednesday with a mission to snap back into a normal practice routine as they progress toward Super Bowl XLVIII.

The Broncos braved the cold for their first full practice of Super Bowl week -- going for one hour and forty minutes after a 30-minute walkthrough session -- on the synthetic turf outdoor field at the New York Jets training facility.

By the end of practice, the temperature dipped to 21 degrees, with 21 mile-an-hour winds and a wind-chill factor of 9 degrees.

Fox has chosen not to use the indoor field at the Jets plush headquarters for practices this week, opting for the synthetic turf outdoor field and the type of natural elements that will greet his team at Met Life Stadium on Super Sunday.

Yet handling the weather was part of a larger picture for the Broncos, who installed their game plan for the matchup against the Seattle Seahawks during three days of practices at home last week.

Fox was pleased with the flow after the travel to East Coast and various commitments connected to playing in a Super Bowl. Wednesday is typically when the focus toward the game increases, given the full-scale practices.

With the game plan installed, Fox said that Monday's practice was essential for reviewing and tweaking.

"I wanted to see how well they would re-boot, get re-charged and practice what we've put in," Fox said. "They recalled it and it went very well. We had a very good practice."

The Broncos had a sense of normalcy on a few levels.

Peyton Manning, as usual, was in command and precise with his throws. He seemed unaffected by the elements.

"Very sharp," Fox said. "What I've noticed, he had to get used to weather over the past two years. I think he's done an unbelievable job, which I think people forget."

Fox put the teams in pads, which it often does during the Wednesday practices when first- and second-down plays, and the more physical rushing game overall is emphasized. The NFL allows one padded practice per week for Super Bowl teams, so the Broncos -- who also practiced in pads last Thursday -- are done with their allotment.

As usual, Fox had the Broncos run several live drills while the eight speakers positioned on one of the sideline blared with crowd noise, to help with concentration.

But there was a tweak: Fox turned down the volume.

"Normally, it's about five times louder than that," Fox said.

The coach -- who coached in Super Bowls as head coach with the Carolina Panthers and as defensive coordinator with the New York Giants -- didn't put the speakers on full blast because Super Bowls generally are played without a home-field advantage.

"It's not an away game," Fox said. "The ones I've been to haven't been too loud. So we just kind of practice with what we think we're going to get."

Just one player on the 53-man active roster did not practice: third-year defensive tackle Sione Fua, nursing a calf injury. Kicker Matt Prater, who missed practices last week with an illness, was a full participant. No players were limited in drills.

There were also a few distinguished guests on hand, The Fox Sports broadcast and studio crews, including Hall of Famers Troy Aikman and Howie Long, former coach Jimmy Johnson, play-by-play man Joe Buck and host Curt Menefee, were on hand.

But unlike the players, the distinguished observers didn't need to brave the elements. They could watch from the comfort of a climate-controlled, glass-enclosed hallway that extends for the entire length of the field.