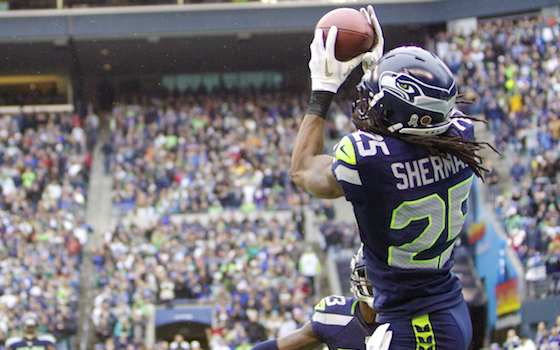 The easy bet is to take the Seahawks and the points. The hard bet is wagering which Seahawks will get what penalties. All are ways to lose money in Las Vegas

In Las Vegas, it has been said, one can place a bet on anything. The fact that a man once cashed in on a $100,000 bet by wearing 38C breast implants for a year would seem to support that statement. That bet rates a tad stranger than any of the Super Bowl wagers we've heard about this year. But Las Vegas bookmaker Bovada.com is doing its best to keep things interesting.

Bovada is taking bets on everything: Length of the national anthem; temperature at kickoff; number of times Denver quarterback Peyton Manning yells "Omaha!" at the line of scrimmage.

Will mondo-talented, mondo-mouthy Seahawks cornerback Richard Sherman get flagged for taunting? For pass interference? For unnecessary roughness? Bovada invites you to lay money on it.

Same goes for betting on Sherman giving another live, on-field interview after the game to FOX TV's Erin Andrews. Because things went so swimmingly when the two of them got together after the NFC title game with San Francisco.

You can make or lose money by wagering on the number of times "12th man" or "Beast Mode" will be mentioned during the telecast. Or by betting on President Obama's pick to win the game. Or by making a wager on what singer Bruno Mars will wear on his head during the halftime show.

Do you like the odds on Manning throwing more touchdown passes than the total goals scored in the Liverpool-West Brom soccer game on Super Sunday? What's your gut feeling on Detroit Red Wings star Henrik Zetterberg scoring more points Sunday at Washington than the total number of interceptions thrown in the Super Bowl? Will the yardage gained on Manning's first pass completion be higher than Jimmie Johnson's finish at the Daytona 500? Gentlemen and gentlewomen, start your betting engines.

In addition to all the bizarre bets, Bovada accepts more standard wagers. We're talking about picking the winning team (Denver is favored by 3 points) and predicting the number of yards that Manning will pass for and Marshawn Lynch will run for and how many total points will be scored.

Those wagers are all fine and good.

I'm betting the house on the color of Gatorade that will be poured on the winning coach. Not to mention the impact the game will have on the stock market the next day. And who can resist the urge to bet on the odds of a member of the Red Hot Chili Peppers going shirtless during the ch-ch-chilly halftime show?