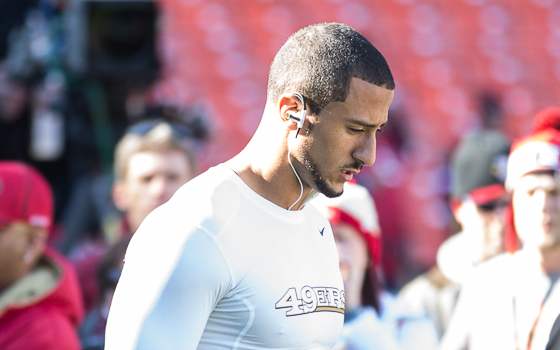 Colin Kaepernick's season is finished, but that didn't keep him from showing up in New York Thursday and issuing a little smack-talk directed at Seahawks CB Richard Sherman.

In an exclusive interview with the New York Post, Kaepernick criticized Sherman's post-game rant following Seattle's 23-17 win against the 49ers in the NFC Championship.

"His comments were ridiculous," Kaepernick said of Sherman. "If you have to tell people how good you are, then how good are you really?"

On San Francisco's final offensive play of the NFC title game, Kaepernick tried WR Michael Crabtree in the back corner of the end zone from 18 yards. Sherman, who was in coverage, jumped, twisted, and tipped the pass to teammate Malcolm Smith for a game-saving interception.

"If I throw the ball one foot farther, it's a TD and now you're the goat, Richard Sherman," Kaepernick said.

After the interception, Sherman flashed the choke sign to Kaepernick before coming off the field. Sherman was flagged 15 yards for unsportsmanlike conduct. The NFL fined him $7,875, the standard amount for a player penalized for taunting.

"Did that make you feel better about yourself?" Kaepernick said, speaking of Sherman. Then go ahead, because I'm not worried about you."

The interception sent the Seahawks to Super Bowl XLVIII. Minutes after the end, Sherman was so excited he launched into a self-praising speech during an interview with Fox reporter Erin Andrews. He declared himself the best cornerback in the NFL, then called Crabtree a "sorry receiver."

Kaepernick doesn't agree with either assessment. Instead, the usually reserved quarterback added more spice to the most bellicose rivalry in the NFL.

"(Sherman's) afraid of our receivers, and that's something I'm looking forward to exploiting next year," Kaepernick said.

"Here's what the national media is saying about the Seahawks

"Sherman has been polite and introspective during interviews in the week leading up to Super Bowl XLVIII. He's credited his teammates and admitted that taunting the 49ers after beating them in the NFC title game was probably a mistake since it took attention from his teammates. Sherman, however, hasn't been able to avoid the limelight,even with many focused on Seahawks RB Marshawn Lynch's reluctancy to speak with reporters.

Sports Illustrated writer Ben Reiter thinks the Broncos should throw at Sherman early in Super Bowl XLVIII, similar to how the Falcons attacked Seattle's secondary in the 2012 NFC divisional round. Atlanta won that game, 30-28, with a late field goal. In the first half, QB Matt Ryan threw a 47-yard touchdown pass to WR Roddy White with Sherman in coverage.

During the regular season, Sherman wrote a column in SI.com's MMQB website ranking the five smartest quarterbacks in the NFL. He was effusive in his praise of Peyton Manning, ranking him No. 1, but added that the future Hall-of-Famer "throws ducks." Sherman stood by his evaluation. Manning, meanwhile, retorted with a smart-aleck response.

The New York Post was at it again with another exclusive story Thursday, "revealing that a lawsuit filed by sports memorabilia collector Eric Inselberg alleges that the New York Giants and QB Eli Manning have been passing off unused helmets and uniforms as "game-worn." According to documents acquired by the Post, the Giants and Manning, Peyton's younger brother, allegedly sold "fake items" to mislead fans and collectors. Barry Barone, the team's dry cleaner since 1982, regularly goes to his Park Cleaners store in East Rutherford, NJ, to dirty up jerseys so they look used, the suit alleges.

Each day this week, the Empire State Building is doing a light show using either Seahawks or Broncos colors. Fans dictate whether it's going to be blue and green, or navy and orange, by tweeting the hashtag #WhosGonnaWin, then posting a prediction for Super Bowl XLVIII. How is the winner decided? The scholars at MIT have developed a social media algorithm that determines the nightly champion.