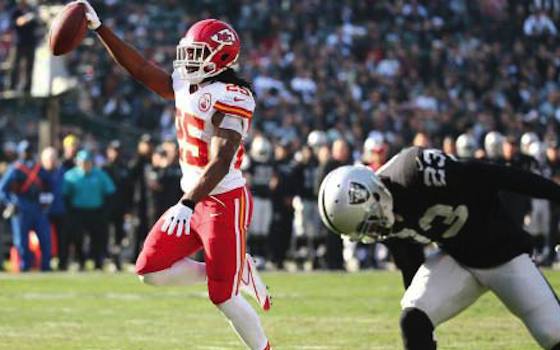 Last Sunday, the Chiefs clinched a playoff berth with a 56-31 victory over the Oakland Raiders at O.co Coliseum. Head Coach Andy Reid will be participating in the postseason for the 10th time in 15 seasons as a head coach in the NFL. This will mark Kansas City's fi rst trip to the playoffs since 2010. The Chiefs 56 points against Oakland are the most ever allowed by the Raiders in their 54-year history and tied for the second-most points scored by the franchise.

Chiefs RB Jamaal Charles scored five touchdowns against the Raiders on only 16 touches, including four TD receptions and one rushing TD. Charles is the first running back in NFL history with four touchdown catches in one game and no other player in NFL history, regardless of his position, has had four touchdown catches and a TD run in one game. Chiefs QB Alex Smith notched a perfect 158.3 quarterback rating after completing 17 of 20 pass attempts (85.0%) for 287 yards with fi ve touchdowns and no interceptions.

The Chiefs were executing in all phases of football as the club's defense recorded seven takeaways, including fi ve interceptions and two fumble recoveries. S Eric Berry intercepted two passes, returning one 47 yards for a touchdown.

Kansas City and Indianapolis have squared off 22 times in regular and postseason play, with the Colts holding a 14-8 advantage. The Chiefs are 4-6 at Arrowhead Stadium against the Colts.

The Colts are looking to improve their playoff seeding and finish 3-1 against AFC West opponents this season.

Last week, the Colts defeated the Houston Texans, 25-3, earning their first season sweep of the Texans since 2009. Outside linebacker Robert Mathis had a sack-forced fumble in the third quarter of the game that resulted in a safety. With the sack, he set Colts all-time records for career (108.0) and single season (16.5) sacks. Cornerback Darius Butler tied a career-high with two interceptions.

The Indianapolis Colts and Kansas City Chiefs have already clinched playoff berths. But both are geared up trying to improve their playoff seeding.

The Kansas City Chiefs appear to have put their funk behind them. After three consecutive losses, the Chiefs have soundly defeated Washington and Oakland by a total of 60 points. The Colts continue to alternate wins and losses.

The Colts are very weak against the run, and haven't held a team below 100 yards over the past few months. A strong Chiefs running game that features Jamaal Charles and the loudest home crowd in the NFL should equate to a relatively easy victory for the Chiefs