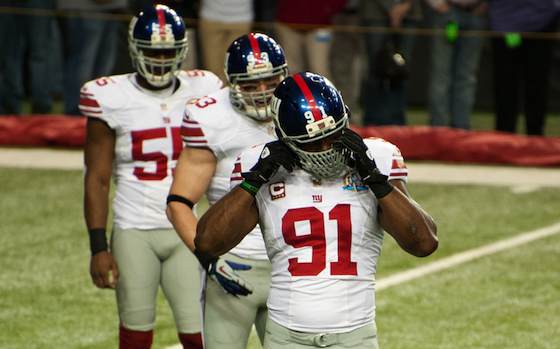 Wilson completed 22 of 30 passes (73.3 percent) for 310 yards with three touchdowns and no interceptions for a 139.6 passer rating in the Seahawks' 34-7 win over New Orleans. With the victory, Seattle clinched a playoff spot.

He has 22 career wins and tied BEN ROETHLISBERGER for the most victories by a starting quarterback in his first two seasons in the Super Bowl era. Wilson also improved to 14-0 at home in his career (6-0 in 2013).

In his second season from Wisconsin, this is Wilson's second career Player of the Week Award (Week 13, 2012).

Wilson joins Pro Football Hall of Famer WARREN MOON as the only Seattle quarterbacks to be named Player of the Week two times in their first two seasons with the club.

Tuck had a career-high four sacks and five tackles in the Giants' 24-17 win at Washington.

He is the fifth player in franchise history with at least four sacks in a game, joining Pro Football Hall of Famer LAWRENCE TAYLOR (twice) and PEPPER JOHNSON (November 24, 1991), MICHAEL STRAHAN (October 14, 2001) and OSI UMENYIORA (September 30, 2007).

Tuck has recorded at least three sacks in a game three times. The only Giants with more three-sack games are Taylor (12) and Strahan (seven).

Tuck registered the third four-sack performance of the season and the first in the NFC. It was also the first four-sack game in December since 2011 (ANTWAN BARNES, December 18) and the first by an NFC player in the month since 2009 (BRIAN ORAKPO, September 13).

In his ninth year from Notre Dame, this is Tuck's second career Player of the Week Award (Week 1, 2009).

The only Giants defensive ends with more Defensive Player of the Week Awards are Strahan (five) and JASON PIERRE-PAUL (three).

Jones placed seven of his eight punts inside the 20-yard line in the Eagles' 24-21 win over Arizona. His seven punts inside the 20 are tied for the third-most in a game since the statistic was introduced in 1976. The single-game mark is eight.

Of the six players (since 1976) to place at least seven punts inside the 20 in a single game, Jones' 44.4-yard net average is the highest.

In his 10th season from Louisiana State, this is Jones' second career Player of the Week Award and second in the past three weeks (Week 11). He has been named NFC Special Teams Player of the Week in the Eagles' past two games (Philadelphia had a bye in Week 12).

Other nominees for NFC Offensive Player of Week 13 as submitted by NFC clubs:

Detroit running back REGGIE BUSH, who rushed for 117 yards with one touchdown and totaled 182 scrimmage yards in the Lions' 40-10 win over Green Bay.

Philadelphia quarterback NICK FOLES, who completed 21 of 34 passes (61.8 percent) for 237 yards with three touchdowns and no interceptions for a 112 passer rating.

Atlanta running back STEVEN JACKSON, who rushed for 84 yards and two touchdowns in the Falcons' 34-31 overtime win over Buffalo.

Chicago wide receiver ALSHON JEFFERY, who had 12 catches for 249 yards and two touchdowns in the Bears' 23-20 overtime loss at Minnesota.

New York Giants quarterback ELI MANNING, who completed 22 of 28 passes (78.6 percent) for 235 yards with one touchdown and one interception for a 98.7 passer rating.

Dallas running back DE MARCO MURRAY, who rushed for three touchdowns in the Cowboys' 31-24 win over Oakland.

Carolina quarterback CAM NEWTON, who threw two touchdown passes and rushed for one score in the Panthers' 27-6 win over Tampa Bay.

Minnesota running back ADRIAN PETERSON, who rushed for 211 yards in the Vikings' 23-20 overtime win over Chicago.

Atlanta wide receiver RODDY WHITE, who had 10 catches for 143 yards.

Other nominees for NFC Defensive Player of Week 13 as submitted by NFC clubs:

San Francisco linebacker NA VORRO BOWMAN, who had 11 tackles and a sack.

Philadelphia linebacker TRENT COLE, who had two sacks and a forced fumble.

Minnesota linebacker CHAD GREENWAY, who had 10 tackles and a sack.

Carolina rookie linebacker A.J. KLEIN, who had a sack and three tackles.

Detroit defensive tackle NDAMUKONG SUH, who had a sack which resulted in a safety and led a defensive unit that allowed 126 total net yards.

Other nominees for NFC Special Teams Player of Week 13 as submitted by NFC clubs:

San Francisco kicker PHIL DAWSON, who converted all three field-goal attempts (32, 43 and 24 yards) and both PATs.