NFL Rookies of the Month - November 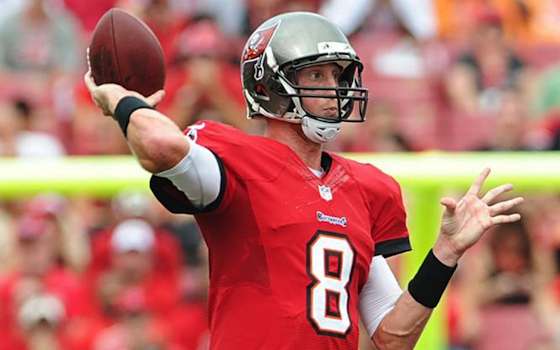 Glennon, a third-round selection (No. 73 overall) out of North Carolina State, won three of his four November starts, completing 62 of 88 passes (70.5 percent) for 785 yards with seven touchdowns and one interception for a 119.7 passer rating.

Glennon is the only player to record at least three games with a 120+ passer rating in November.

In Week 11, Glennon completed 87 percent of his passes (20 of 23), the highest mark ever recorded by a rookie in a game (minimum 15 completions).

In Week 12, Glennon threw an 85-yard touchdown pass to TIQUAN UNDERWOOD in the fourth quarter to give the Buccaneers a 24-21 win at Detroit. It marked the second-longest game-winning fourth-quarter touchdown pass by a rookie in NFL history (KERRY COLLINS, 1995, 89 yards).

Glennon joins SHAUN KING (December 1999) as the only Buccaneers quarterbacks to be named NFL Offensive Rookie of the Month.

Richardson, a first-round selection (No. 13) out of Missouri, had 22 tackles, including four tackles for a loss and a half sack in three games in November.

Richardson has 59 tackles, three sacks, 10 tackles for a loss, one pass defensed and a forced fumble this season. He is the only NFL rookie defensive lineman with at least 50 tackles and three sacks.

He started all three games for the Jets in November and now has started 10 of 11 games games this season.

In Week 11, Richardson tied the team-high with nine tackles. In Week 12, his nine tackles were a team-best.

In November, Richardson played a pivotal role in a Jets run defense that held opponents to 176 yards on 82 carries (2.1 average).

Through Week 12, the Jets have allowed the fewest rush yards per game (72.6).

Richardson is the first defensive tackle to be named NFL Defensive Rookie of the Month since Detroit's NDAMUKONG SUH (October 2010).

Other nominees for the November NFL Offensive Rookie of the Month Award as submitted by NFL clubs:

San Diego wide receiver KEENAN ALLEN (third round, California), who had 24 receptions for 338 yards (14.1 average) with one touchdown.

St. Louis wide receiver-punt returner-kick returner TAVON AUSTIN (first round, West Virginia), who scored four touchdowns -- one punt return (98 yards), two receiving (81 and 57) and one rushing (65) -- and averaged 75.3 yards per touchdown, the highest by a rookie in a calendar month in NFL history (minimum four touchdowns).

San Diego tackle D.J. FLUKER (first round, Alabama), who has started the past four games at left tackle after starting the season at right tackle.

Tennessee wide receiver JUSTIN HUNTER (second round, Tennessee), who had 10 receptions for 173 yards with one touchdown.

Green Bay running back EDDIE LACY (second round, Alabama), who rushed for 360 yards, including two 100-yard games, and three touchdowns.

Oakland quarterback MATT MC GLOIN (undrafted, Penn State), who completed 44 of 79 passes (55.7 percent) for 544 yards with four touchdowns versus one interception and an 88.8 passer rating.

Minnesota wide receiver-kick returner CORDARRELLE PATTERSON (first round, Tennessee), who averaged 27.5 yards per kickoff return and had 16 catches for 117 yards.

St. Louis running back ZAC STACY (fifth round, Vanderbilt), who rushed for 276 yards and four touchdowns in three games.

Other nominees for the November NFL Defensive Rookie of the Month Award as submitted by NFL clubs:

Buffalo linebacker KIKO ALONSO (second round, Oregon), who totaled 31 tackles and one sack.

Tampa Bay cornerback JOHNTHAN BANKS (second round, Mississippi State), who started all four games and had 17 tackles, three passes defensed and an interception.

New England safety DURON HARMON (third round, Rutgers), who had 18 tackles, one pass defensed and one interception.

Carolina defensive tackle STAR LOTULELEI (first round, Utah), who started all four games and had 11 tackles and a sack.

Arizona safety TYRANN MATHIEU (third round, Louisiana State), who started all three games and had 15 tackles and three passes defensed.

Oakland linebacker SIO MOORE (third round, Connecticut), who started three of four games and had 21 tackles, one sack and forced one fumble.

November NFL Rookies of the Month