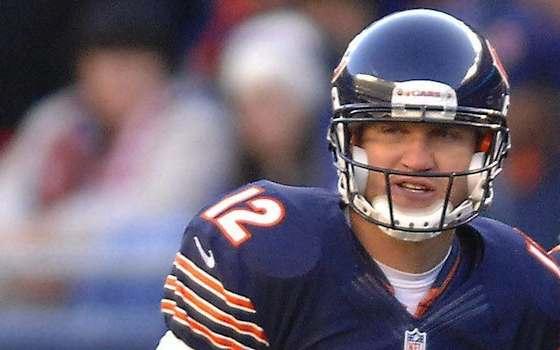 Bears Quarterback Josh McCown, Cardinals linebacker John Abraham and 49ers kicker Phil Dawson are the NFC Players of the Week for games played the 14th week of the NFL 2013 season

He is the first Bears quarterback to pass for four touchdowns and rush for a TD in a game since JACK CONCANNON in 1970 (December 13).

McCown is the first Chicago quarterback with five total touchdowns and no interceptions since LARRY RAKESTRAW in 1967 (November 12).

This season, McCown and PEYTON MANNING (October 6) are the only players to pass for at least four touchdowns and rush for a TD in the same game. No player accomplished the feat in 2012.

The Bears gained 490 yards of total offense against the Cowboys and scored on all eight of the team's drives (not including the final kneeldown to end the game).

In his 11th season from Sam Houston State, this is McCown's first career Player of the Week Award.

McCown is the seventh quarterback in franchise history to be named Player of the Week and the first since JAY CUTLER (Week 12, 2010).

Abraham had three sacks, a safety, one forced fumble and six tackles in the Cardinals' 30-10 win over St. Louis.

In his career, Abraham has 133 sacks and passed Pro Football Hall of Famer LAWRENCE TAYLOR (132.5) and LESLIE O'NEAL (132.5) to move into ninth place on the NFL's all-time sacks list.

The performance was Abraham's 10th career game -- and second this season -- with at least three sacks. Only Pro Football Hall of Famers Taylor (12) and REGGIE WHITE (12) have more.

Abraham joined CURTIS GREER (1983) as the only Cardinals to register multiple three-sack games in a season.

Abraham, who has 11 sacks this season, is one of only nine Cardinals to record at least 10 sacks in a season.

Abraham leads all active players with 133 sacks and 48 forced fumbles.

He is the seventh player to be named Defensive Player of the Week with three different teams. He joins a list that includes Pro Football Hall of Famers CHRIS DOLEMAN, DEION SANDERS and ROD WOODSON.

His 13 points were tied for the most scored by any NFC player in Week 14.

Dawson is the sixth kicker in franchise history to be named Player of the Week and the first since DAVID AKERS, who won twice in 2011 (Weeks 16 and 17).

Other nominees for NFC Offensive Player of Week 14 as submitted by NFC clubs:

New Orleans quarterback DREW BREES, who completed 30 of 42 passes (71.4 percent) for 313 yards with four touchdowns and no interceptions for a 124.4 passer rating in the Saints' 31-13 win over Carolina.

Arizona wide receiver LARRY FITZGERALD, who had 12 catches for 96 yards and a touchdown.

San Francisco running back FRANK GORE, who rushed for 110 yards.

Philadelphia running back LE SEAN MC COY, who rushed for 217 yards and two touchdowns in the Eagles' 34-20 win over Detroit.

Arizona quarterback CARSON PALMER, who completed 27 of 32 passes (84.4 percent) for 269 yards with one touchdown and no interceptions for a 112.1 passer rating.

Minnesota rookie wide receiver CORDARRELLE PATTERSON, who had five catches for 141 yards and a touchdown in the Vikings' 29-26 loss at Baltimore.

Tampa Bay running back BOBBY RAINEY, who rushed for 127 yards and a touchdown in the Buccaneers' 27-6 win over Buffalo.

Other nominees for NFC Defensive Player of Week 14 as submitted by NFC clubs:

Arizona linebacker KARLOS DANSBY, who had eight tackles, one sack and a 23-yard interception-return touchdown.

Minnesota linebacker CHAD GREENWAY, who had 11 tackles and an interception.

Other nominees for NFC Special Teams Player of Week 14 as submitted by NFC clubs:

Green Bay kicker MASON CROSBY, who converted all three field-goal attempts (40, 33 and 25 yards) and one PAT in the Packers' 22-21 win over Atlanta.

Detroit kick returner-punt returner JEREMY ROSS, who returned a kickoff (98 yards) and a punt (58) for a touchdown in the Lions' 34-20 loss at Philadelphia.