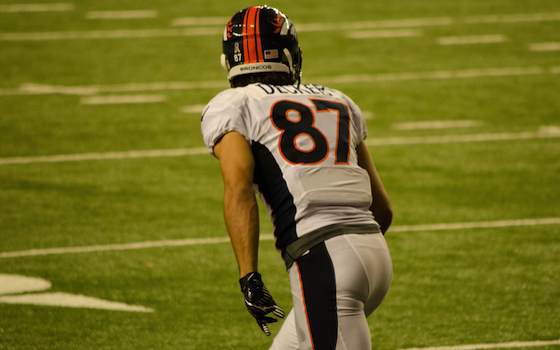 Decker had eight receptions for 174 yards (21.8 average) with four touchdown receptions in the Broncos' 35-28 win at Kansas City.

Decker is the 11th different player in NFL history with at least 170 receiving yards and four touchdowns in a game. The last player to accomplish the feat was TERRELL OWENS on November 18, 2007.

Decker's four TD catches are the most in a single game in club history and tied for the most in an NFL game this season (MARVIN JONES).

His 174 receiving yards were the third-most in the NFL in Week 13 and the most among players in a winning effort.

Since 2012, Decker has 20 touchdown receptions, tied for the third-most in the NFL.

He joins Thomas and Bengals' Marvin Jones (Week 8) as the third wide receiver to win AFC Offensive Player of the Week honors in 2013.

Vernon registered 10 tackles and a career-high 2.5 sacks in the Dolphins' 23-3 win at the New York Jets.

Vernon's 2.5 sacks were an AFC-best in Week 13 and tied for the second-most in the NFL (JUSTIN TUCK, four).

Played a key role for a Dolphins defense that registered two interceptions, four sacks and limited the Jets to 177 yards of total offense.

In his second season from Miami, this is Vernon's second career Defensive Player of the Week Award. He previously won the award in 2012 (Week 8).

He joins CAMERON WAKE (Week 9) as the second Dolphin to win Defensive Player of the Week honors this season.

With field position being a key factor in the game, Huber punted four times for 222 yards (55.5 average), including two punts inside the 20 in the Bengals' 17-10 win at San Diego.

His 75-yard punt tied for a team record and is the second-longest punt in the NFL this season (ROBERT MALONE, 84 yards).

The Chargers returned one punt for zero yards and had two fair catches.

In his fifth season from Cincinnati, this is Huber's first career Special Teams Player of the Week Award. Huber is the first Bengals punter to win the award since the accolade was instituted in 1984.

He joins Browns' SPENCER LANNING as the second punter to earn AFC Special Teams Player of the Week honors this season.

Other nominees for AFC Offensive Player of Week 13 as submitted by AFC clubs:

New England quarterback TOM BRADY, who completed 29 of 41 passes (70.7 percent) for 371 yards with two touchdowns versus one interception and a 104.8 passer rating in the Patriots' 34-31 win at Houston.

Indianapolis running back DONALD BROWN, who rushed for 54 yards on 14 carries with one touchdown.

Baltimore quarterback JOE FLACCO, who completed 24 of 35 passes (68.6 percent) for 251 yards with one touchdown versus zero interceptions and a 98.6 passer rating in the Ravens' 22-20 win over Pittsburgh.

Cleveland wide receiver JOSH GORDON, who had 10 catches for a franchise-record 261 receiving yards (26.1 average) with two touchdowns in the Browns' 32-28 loss to Jacksonville.

Oakland wide receiver ANDRE HOLMES, who had seven catches for 136 receiving yards (19.4 average) in the Raiders 31-24 loss at Dallas.

Buffalo running back C.J. SPILLER, who rushed for 149 yards on 15 carries (9.9 average) with one touchdown in the Bills' 34-31 overtime loss to Atlanta in Toronto.

Miami quarterback RYAN TANNEHILL, who completed 28 of 43 passes (65.1 percent) for 331 yards with two touchdowns versus one interception and a 94.2 passer rating.

Houston running back BEN TATE, who rushed for 102 yards on 22 carries (4.6 average) with three touchdowns in the Texans' 34-31 loss to New England.

Other nominees for AFC Defensive Player of Week 13 as submitted by AFC clubs:

Tennessee defensive tackle JURRELL CASEY, who had five tackles, one sack and two tackles for a loss.

Indianapolis linebacker JERRELL FREEMAN, who had nine tackles, one interception, one fumble recovery and one pass defensed in the Colts' 22-14 win over Tennessee.

Cincinnati safety GEORGE ILOKA, who had six tackles, one forced fumble and one fumble recovery in the Bengals' 17-10 win at San Diego.

Jacksonville defensive tackle SEN'DERRICK MARKS, who had three tackles, one sack, one forced fumble, one fumble recovery and one pass defensed in the Jaguars' 32-28 win at Cleveland.

Oakland linebacker NICK ROACH, who had 11 tackles, two sacks and forced a fumble.

Other nominees for AFC Special Teams Player of Week 13 as submitted by AFC clubs: