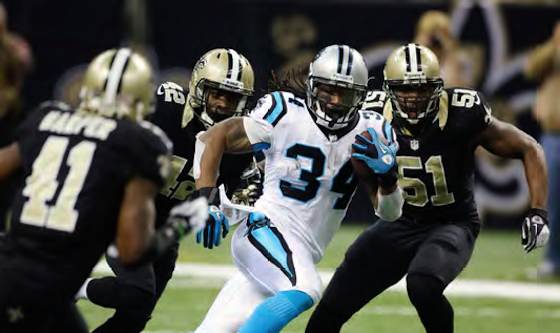 The Panthers and Saints meet for the 38th time. The Panthers hold a 19-18 advantage in the all-time series. In their first meeting this season the Saints defeated the Panthers, 31-13, in Week Fourteen in New Orleans.

The Saints are coming off of a 27-16 loss at the St. Louis Rams on Sunday. The Rams took a 17-0 lead, but New Orleans fought and got back to 27-16 at the two minute warning. But K Garrett Hartley missed a 26-yard field goal attempt and the Rams were powered by RB Zac Stacy, who carried 28 times for 133 yards (4.8 avg.) with one touchdown and a defense that forced three New Orleans turnovers and paced the St. Louis victory.

Saints QB Drew Brees provided his second-largest passing yardage total of the season to help keep New Orleans in the contest as he completed 39-of-56 passes for 393 yards with one touchdown, tying a career-high for completions and also rushing for a score. WR Marques Colston had eight receptions for 92 yards, including a fourth quarter touchdown grab. Defensively, ILB David Hawthorne led New Orleans in tackles with ten solo stops.

The Panthers continued their surge, winning for their ninth time in ten games as they defeated the New York Jets Sunday 30-20 at Bank of America Stadium.

DeAngelo Williams dashed 72-yards on a screen pass to break a 6-6 tie and put the Panthers ahead for good. Williams finished the day with 87 yards receiving and 81 more rushing to spark the Panthers victory.

Cam Newton was the focus of the Carolina attack, completing 16 of 24 attempts for 273 yards with one touchdown and a 118.9 passer rating.

While distributing the ball to six different receivers, Newton found Olsen for five catches for 88 yards, Brandon LaFell three times for 61 yards, and Steve Smith on three occasions for 20 yards. It continued a season-long pattern that has seen six different players record at least 22 catches, including Olsen and Smith with team highs of 63 receptions.

Graham Gano added three field goals and has now converted 23 of 26 attempts along with putting 56 of his 71 kickoffs into the end zone to lead the NFL at 78.9 percent. The defense held true to form and tallied a score of its own when Captain Munnerlyn returned an interception 42 yards for a touchdown to seal the game.

The Panthers enter Sunday's game second in the NFL in yards allowed, rushing yards allowed, and points scored as well as fifth in passing yards surrendered, but the challenge gets harder against a Saints offense that posted 31 points and 373 yards the last time the two teams met.

The Panthers offense has been powered by their run game, which ranks eighth in the league, and a suffocating defense that ranks second in the NFL, second against the run and fifth against the pass, while holding opponents to 203 points, the second lowest total in the NFL.

Slowing down the New Orleans offense falls squarely on the shoulders of linebackers Luke Kuechly and Thomas Davis, who rank one-two in tackles with 141 and 128, respectively, along with defensive ends Charles Johnson and Greg Hardy, who are first and second in sacks. Both Kuechly and Hardy recorded sacks against the Jets as the Panthers limited New York to 297 total yards.

The Saints offensive unit is currently ranked fifth in the NFL in total net yardage, second throwing the ball, On defense, the Saints rank fifth in opponent net yards per game and third against the pass. The stingy Saints defensive unit has surrendered only 270 points, the fifth-lowest total in the NFL.

In fact, the Saints are the only team in the NFL to be ranked in the top five both offensively and defensively.

The Saints aren't the greatest of road teams in the NFL, while the Panthers have a distinct home-field advantage. The match-up shapes up to be a back-and-forth battle, but I expect the Panthers to pull the game out in the end.

For the Saints to win, Drew Brees will need to play an outstanding game.