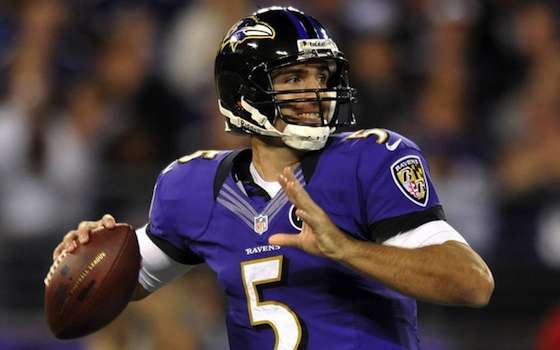 Fighting to make the playoffs for the sixth-consecutive season, the Baltimore Ravens host the New England Patriots this week. The Patriots can clinch their fifth straight AFC East title and qualify for the playoffs

The Ravens, winners of four in a row and five of the last six, are now 8-6. The Patriots, winners of three consecutive before their Week 15 24-20 loss at Miami, lead the AFC East with a 10-4 record.

The Patriots control their playoff destiny and can clinch their fifth straight AFC East title with a win -- or a Miami loss -- over the Ravens. A Patriots' win and losses by the Bengals and Colts guarantees a first-round bye for New England.

"We've got 10 wins, and 10 wins is fine," says Brady. "But it hasn't gotten us anything. We haven't qualified for anything. We need to start playing better football and see if we can do better on a more consistent basis."

Baltimore has won four games in a row and is now in control of its destiny in the AFC North.

On Monday night, Justin Tucker kicked six field goals in the Ravens' 18-16 win at Detroit. Tucker sealed the victory with a career-long 61-yard field goal with 38 seconds remaining. That marked the third-longest come-from-behind game-winning field goal in the final minute of the fourth quarter in NFL history.

"We're playing our best football right now and we're going to have to continue to improve with what we have in front of us down the stretch," says Ravens head coach JOhn Harbaugh.

This is the seventh game between the Ravens and Patriots since 2009, including the last two AFC Championships -- both played in Foxboro. Baltimore won the 2012 AFC Championship, 28-13, while New England took the 2011 title, 23-20. The teams have split the previous six games they've played.

Last week, K Justin Tucker kicked a 61-yard field goal with 38 seconds left in the game to give the Ravens an 18-16 victory at Detroit. Tucker's kick was the longest in team history and one of six he made on the night, which set another franchise mark. Baltimore collected three turnovers times, all interceptions off Lions QB Matthew Stafford. DE DeAngelo Tyson, ILB Daryl Smith and S Matt Elam grabbed the INTs, while the Ravens did not commit a turnover.

Against the Dolphins, QB Tom Brady and the New England Patriots comeback effort fell short, as the Miami Dolphins stopped the Patriots from clinching the AFC East with a 24-20 victory.

The Patriots rallied from fourth quarter deficits to win their last three games, but Brady's fourth-down pass from the Miami 14-yard line was intercepted by S Michael Thomas with two seconds left to give Miami the win.

The Ravens have also had luck go their way, too.

However, the Ravens have kept Tom Brady at bay. Brady hasn't played well against the Ravens, compiling a career passer rating of 72.1. In addition, the Ravens are the only team which Brady has thrown more interceptions than touchdown passes.

Expect plenty a close game with plenty of field goals and a victory by the home team.