NFC Players of the Month - November 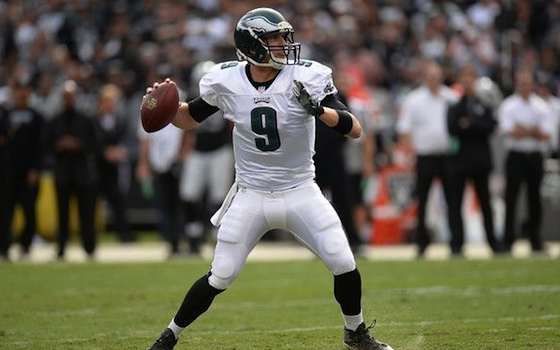 Foles' 152.8 passer rating is the highest for any calendar month in NFL history (minimum 50 attempts).

He was named the NFC Offensive Player of the Week in Week 9 when he tied the NFL single-game record with seven touchdown passes. He completed 22 of 28 passes (78.6 percent) for 406 yards with seven touchdowns and no interceptions for a 158.3 passer rating, the highest attainable mark.

Foles leads the NFL with a 128 passer rating and has thrown 16 touchdowns without an interception. Only Denver's PEYTON MANNING (20 in 2013) has started a season with more touchdown passes before throwing an interception. Foles is currently tied with Cleveland's MILT PLUM (16 in 1960).

In his second season from Arizona, this is Foles' first career Player of the Month Award.

He joins RANDALL CUNNINGHAM (four), DONOVAN MC NABB (four) and MICHAEL VICK (one) as the only quarterbacks in franchise history to be named Offensive Player of the Month.

Davis had 35 tackles, an interception, one sack and a forced fumble as the Panthers went 4-0 during November.

During the month, Davis was the only player in the NFL to record at least 35 tackles, a sack and a forced fumble.

The Panthers lead the NFL this season allowing 13.7 points per game.

This year, Davis and Tampa Bay's LAVONTE DAVID are the only players in the NFL with at least 80 tackles (89), four sacks (four) and an interception (one).

In his ninth year from Georgia, this is Davis' first career Player of the Month Award.

Davis is the first Panther to be named Defensive Player of the Month since JULIUS PEPPERS (November 2008).

Austin scored four touchdowns -- one punt return (98 yards), two receiving (81 and 57) and one rushing (65) -- during November and averaged 75.3 yards per touchdown, the highest by a rookie in a calendar month in NFL history (minimum four touchdowns).

He joined Pro Football Hall of Famers JIM BROWN (1963) and GALE SAYERS (1965) as the only players in NFL history to score four touchdowns of at least 50 yards in a two-game span in a single season.

Austin was named the NFC Special Teams Player of the Week in Week 10 when he became the first player in NFL history with a 95+ yard punt-return touchdown and two 55+ yard receiving touchdowns in a single game.

He is the first player in NFL history to record a 95+ yard punt-return touchdown, an 80+ yard receiving touchdown and a 65+ yard rushing touchdown in a single season.

He was the only player in November to average at least 20 yards on both punt (22.4) and kickoff returns (25.3) with a minimum of three returns each.

In his rookie season from West Virginia, this is Austin's first career Player of the Month Award.

Austin is the first return specialist in franchise history to be named Special Teams Player of the Month.

NFC Players of the Month - November