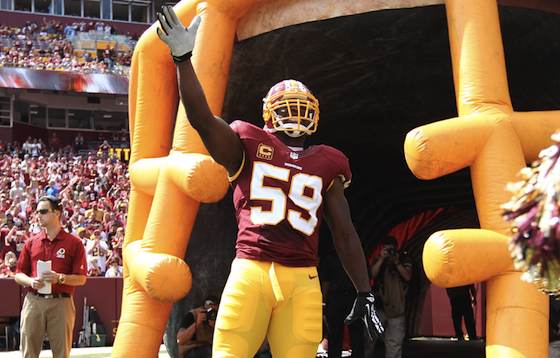 This past Sunday, Washington linebacker London Fletcher played in his 250th consecutive game and became only the fourth player in NFL history to reach the milestone.

Like a fine wine, All-Pro linebacker London Fletcher has only gotten better with age. Now in his 16th NFL season, the 38-year-old Fletcher returns a season removed earning his fourth consecutive Pro Bowl berth and being named to the Associated Press All-Pro team for the second consecutive year.

His remarkable record of achievement is surpassed only by his even more remarkable record of durability, as Fletcher holds the distinction as the NFL's active Iron Man. In Week 11, he became only the fourth player in NFL history to reach 250 consecutive games played, joining Jeff Feagles (352), Brett Favre (299) and Jim Marshall (282).

"It's an amazing feat," says Fletcher. "It's kind of hard to put that in perspective when you think about it. I remember a few years back when I was coming up on 200 games and thought to myself, 'Wow, 200 games.' And now here I am at 250 straight. I haven't had a chance to reflect on my career and all that, but when you look at it, it's awesome. It's amazing. It's a credit to my coaches, my teammates and how I try to listen to my body and also God's grace and blessings."

Fletcher, who entered the NFL in 1998 with the St. Louis Rams, has not missed a single game in his career and joined punter Jeff Feagles (352), quarterback Brett Favre (299) and defensive end Jim Marshall (282) as the only players to appear in 250 consecutive games.

Fletcher also made his 209th consecutive start on Sunday, surpassing DERRICK BROOKS for the longest streak by a linebacker in NFL history. Fletcher's streak began on November 12, 2000 (Week 11) when he played for St. Louis and he has started every game since. Brooks started every game for the Buccaneers from 1996 through 2008.

"What's really driven me to play week in and week out is my commitment to my teammates and my desire to be out there on the field with them," says Fletcher.

Now in his 16th NFL season, Fletcher entered the league as an undrafted free agent out of Division III John Carroll University and signed with the Rams in 1998.

"My expectations were just to make the team," recalls Fletcher. "I was just hoping I made the practice squad, to tell you the truth. But from there, once I got the opportunity, I felt I could play. It was just a matter of taking advantage of it."

Fletcher was a member of the 1999 Rams team that won Super Bowl XXXIV and has been selected to four Pro Bowls (2009-2012) in his career. He is closing in on 2,000 career tackles (1,998) and is the active leader in the category. In fact, Fletcher is one of only three active players with at least 1,000 career tackles.

"He's the hardest working guy I've ever been around," says Redskins defensive coordinator JIM HASLETT about Fletcher. "And he's the smartest linebacker I've seen. He is as good as it gets."

Fletcher has recorded 39 sacks and 23 interceptions in his career and is one of only four players to accomplish the feat since sacks became an official statistic in 1982, joining SETH JOYNER (52 sacks, 24 interceptions), RAY LEWIS (41.5 sacks, 31 interceptions) and WILBER MARSHALL (45 sacks, 23 interceptions).

"It's a good thing there aren't a lot of players like London," says Washington head coach MIKE SHANAHAN, "or else there would be no need for coaches."