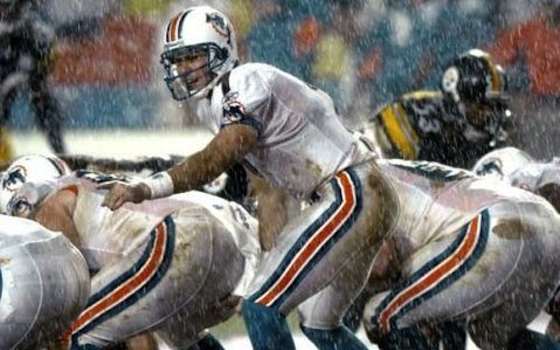 "That's part of our goal," says Broncos head coach JOHN FOX about qualifying for the postseason. "But our goal is still to win the division and get the best seed we can. Our biggest goal is to get to the big game and win the big game."

That leaves nine spots available and there are still 25 teams in contention for a trip to Super Bowl XLVIII.

"There are a lot of teams that are fighting it out," says New England head coach BILL BELICHICK, whose team leads the AFC East by three games. "What happens this year will be determined by what happens in the next few weeks. This is where this team and every other team will define itself."

"We're in the playoff race right now so every game counts," says 49ers tackle JOE STALEY. "We can't drop anything and hope for someone else to do something for us. It's all about taking control of what we can control. We're in a position now where if we win all these games, we'll be in a good position for the playoffs."

Last week, three teams -- Baltimore (0:04), New England (0:31) and San Francisco (0:26) -- scored the winning points in come-from-behind fashion in the final 31 seconds. A fourth -- Pittsburgh -- fell just short on the game's final play. In the Ravens' 29-26 win over Minnesota, there were six fourth-quarter lead changes, the most in NFL history. Five of those lead changes occurred in the final 2:05, with the final one taking place with four seconds remaining.

"Will we ever see another game like that again?" asked Ravens head coach JOHN HARBAUGH at the start of his postgame press conference. "That was about the best team win a team could ever have."

In Week 14, there were 104 touchdowns and 859 points scored. Both are the most in a single week in NFL history. After an exciting weekend of action, Week 15 starts on Thursday night. Some of the key games this week:

Entering Week 15, the Patriots lead the Dolphins by three games in the AFC East and Miami is tied with Baltimore for the final playoff spot in the conference. A New England win on Sunday will clinch the division for the Patriots.

The Dolphins improved to 7-6 with a 34-28 road victory at Pittsburgh. Miami quarterback RYAN TANNEHILL threw three touchdown passes, including two to tight end CHARLES CLAY, and the Dolphins held on late to knock off the Steelers. Now the attention turns to New England in a key divisional contest.

"Really, all that matters is we have an excellent football team coming to town," says Miami head coach JOE PHILBIN. "They've won five of their past six. We're going to have to play extremely well."

For Green Bay, it will be the team's first game back in Dallas since winning Super Bowl XLV. Rookie running back EDDIE LACY has rushed for a touchdown in six of his past eight games and last week set a franchise rookie record with his seventh rushing touchdown.

The Cowboys control their playoff chances and are poised to claim the division if they win their final three games.

"You've got to keep working," says Dallas head coach JASON GARRETT. "Green Bay is coming to our place on Sunday and we've got to get ready for it."

Cowboys wide receiver DEZ BRYANT had a touchdown catch last week against Chicago, his 10th of the season. Bryant, who had 12 TDs last year, is the fourth player in franchise history to record at least 10 TD catches in back-to-back years.

The Bengals enter Week 15 with a two-game lead in the AFC North over Baltimore. With a victory on Sunday night and a Ravens loss, Cincinnati will be division champions. In last week's 42-28 win over Indianapolis, Bengals quarterback ANDY DALTON threw three touchdown passes and rushed for another while running back BEN JARVUS GREEN-ELLIS rushed for two TDs as Cincinnati won its third consecutive game.

"We know what we're capable of and we've got some momentum now," says Dalton. "But we've got to keep it going."

Pittsburgh finds itself two games out of the final playoff spot in the AFC and will need to finish strong to make a run at the postseason.

"A lot has to happen, but you never know," says Steelers defensive end ZIGGY HOOD. "You don't want to look back and say we didn't take care of what we had to do. We have to keep looking up and do what we know we can do."

Both the Ravens and Lions are in control of their playoff chances. Win out and you're in the playoffs. So a lot will be on the line on Monday night.

Baltimore needed three touchdowns in the final 2:05 last week to knock off Minnesota in a game that featured five lead changes in the final 125 seconds. During that span, JOE FLACCO threw two touchdowns (one yard to DENNIS PITTA and nine yards to MARLON BROWN) and JACOBY JONES returned a kickoff 77 yards for a score.

With three weeks to play, Detroit and Chicago are tied atop the NFC North with 7-6 records.

Lions quarterback MATTHEW STAFFORD (3,973) is closing in on his third-consecutive 4,000-yard season. Wide receiver CALVIN JOHNSON, who leads the NFL with 4,993 receiving yards since the start of the 2011 season, needs just seven yards to become the first player in NFL history to record 5,000-yards in any three-season span. Johnson has nine 100-yard games in his past 10 against the AFC, averaging 140.4 yards per contest.