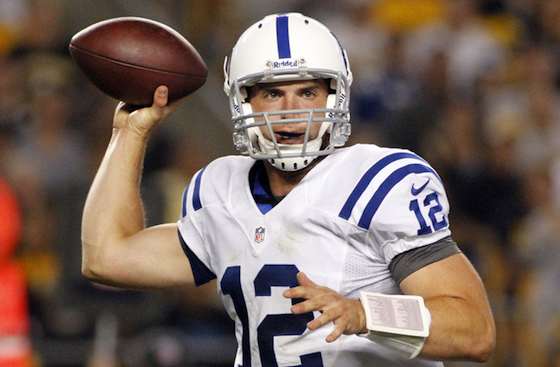 It's Week 14 of the NFL season and only four games remain to decide who advances to the playoffs. And who goes is anyone's guess as 29 teams remain in contention for a trip to Super Bowl XLVIII.

"Every game counts this time of year," says Philadelphia Eagles linebacker Trent Cole. "We're going to take every game one by one and see where we are at the end of the season. When December 29th comes, we'll see where we are."

With four games to go, there are 20 teams either in or within one game of a playoff spot. Five more teams are within two games of a postseason berth.

"This time of year, your backs are against the wall and every game matters," says San Francisco 49ers linebacker Patrick Willis. "You've got to make sure you go out there and get the job done."

The Seattle Seahawks are the first team to clinch a spot in the 2013 playoff field and can clinch the NFC West -- and a first-round bye -- with a win.

"We're a playoff team, but that's not our goal," says Seahawks head coach Pete Carroll. "We want to win the division. A division title gets us a chance to play at home. That's what we're after next."

Six teams have a chance to join the Seahawks in the postseason by clinching a playoff berth this weekend: Denver, Indianapolis, Kansas City and New England in the AFC; Carolina and New Orleans in the NFC.

"This time of year, every game is important," says Broncos wide receiver ERIC DECKER, who had a franchise-record four touchdown receptions last week. "We've got to take care of business every week and continue to get better." Here's a preview of some of the key games in Week 14:

Two division leaders will meet when the Bengals host the Colts. Cincinnati leads the AFC North by two games over Baltimore while Indianapolis has opened up a three-game lead over Tennessee in the AFC South.

Last week, the Colts defeated the Titans 22-14 to move to 8-4 on the season and take control of the division. Indianapolis kicker ADAM VINATIERI tied his career high with five field goals and scored 16 points in the win. It marked the 87th time in his career that he has accounted for his team's margin of victory, the second-most in NFL history.

"It was time to put something together," says Indianapolis head coach CHUCK PAGANO. "The division was hanging in the balance and everything was on the line. The guys manned up."

Bengals quarterback ANDY DALTON connected with wide receiver A.J. GREEN on a 21-yard touchdown and the defense limited the Chargers to 10 points in Cincinnati's 17-10 road victory. Dalton joined PEYTON MANNING as the only players in NFL history to pass for at least 3,000 yards in each of their first three seasons to begin a career.

"That was a hard-fought football game," says Bengals head coach MARVIN LEWIS. "I couldn't be more proud of our effort, our energy and our resolve. We just kept playing."

Both the Lions and Eagles enter the final quarter with 7-5 records and an eye on the playoffs. Detroit currently leads the NFC North by a game while Philadelphia is tied with Dallas atop the NFC East.

On Thanksgiving, the Lions knocked off Green Bay 40-10. Detroit running back REGGIE BUSH had 182 scrimmage yards with a touchdown, quarterback MATTHEW STAFFORD passed for 330 yards and three TDs and wide receiver CALVIN JOHNSON had six catches for 101 yards with a touchdown. Defensively, the Lions limited the Packers to 126 total net yards and did not allow an offensive touchdown.

"It was a huge win for us," says Bush. "We answered the call. We came out with a win and we're in first place right now. We have another big game coming up this week."

"Each week is a big test for us," says Eagles running back LE SEAN MC COY, who leads the NFL with 1,523 scrimmage yards. "We cannot look too far ahead. We have to look to our next game against Detroit and try to be 1-0 this week."

At 11-1, the Seahawks have a three-game lead over the 49ers in the NFC West and will clinch the division -- and a first-round bye -- with a win on Sunday. Seattle, which has already secured a playoff berth, has won the past two meetings between the teams by a combined 71-16 score. Last Monday night, the Seahawks defeated New Orleans 34-7 to take a commanding two-game lead in the race for home-field advantage.

"For us to come out in that fashion and to win that game the way that we did was awesome," says Seattle quarterback RUSSELL WILSON, who threw three touchdown passes and won his 22nd game, tied for the most in the Super Bowl era in a quarterback's first two NFL seasons.

The 49ers have won two in a row after last week's 23-13 win over St. Louis. San Francisco quarterback COLIN KAEPERNICK has recorded a 100+ passer rating in each of the past two and, including the playoffs, the 49ers are 10-0 in Kaepernick's starts with a 100+ rating. Tight end VERNON DAVIS recorded his 10th touchdown reception of the season last week and the 50th of his career.

"It's going to be a really, really big game and we're looking forward to it," says 49ers safety DONTE WHITNER. "We're going to give them our best shot."

With two meetings in the next three weeks, the Panthers and Saints will battle for the top spot in the NFC South.

"It's like you're getting the best of the best," says NBC analyst CRIS COLLINSWORTH. "You're going to see Carolina's defense, led by LUKE KUECHLY, going into the Superdome where we've seen everybody struggle to try and stop that offense with DREW BREES. It's going to be fantastic."

Carolina has won a franchise-record eight consecutive games, including last week's 27-6 victory over Tampa Bay. Panthers quarterback CAM NEWTON passed for two touchdowns and rushed for another and Carolina's defense, which leads the NFL in fewest points allowed (157), limited the Buccaneers to 206 total net yards and no touchdowns.

The Saints are 6-0 at home this season. New Orleans QB DREW BREES leads the NFL with a 122.2 home passer rating (minimum 150 attempts), including 19 touchdowns and only three interceptions. Saints tight end JIMMY GRAHAM has six 100-yard games in 2013, tied for the most by a tight end in a single season in NFL history.

The Cowboys enter Week 14 tied for first place in the NFC East with Philadelphia. Dallas has won two in a row, including a 31-24 win on Thanksgiving over Oakland. Running back DE MARCO MURRAY rushed for a career-high three touchdowns, becoming the first Cowboy with three rushing TDs on Thanksgiving Day since 1998 when Pro Football Hall of Famer EMMITT SMITH accomplished the feat.

"We just need to keep winning games," says Dallas quarterback TONY ROMO. "Our football team continues to try and improve each week and I think we're playing some of our best football right now."

The Bears sit a game out of first place in the NFC North with a 6-6 record. Last week, wide receiver ALSHON JEFFERY had 12 catches for 249 yards and two touchdowns, his second 200-yard game this season. Jeffery owns the two best receiving-yardage days in team history and his two 200-yard receiving games match the franchise's total entering the 2013 season.

"All of the records, that's fine," says Jeffery, "but I just want to win."