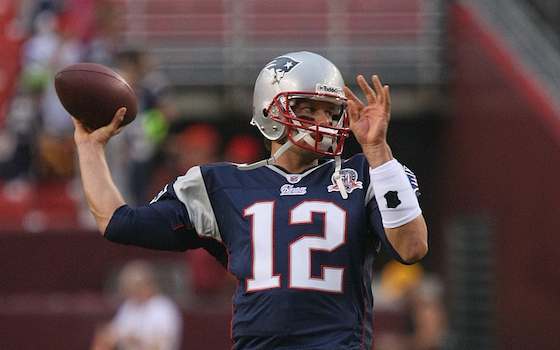 Stayin' Alive in the Playoff Chase

With three weeks to play in the regular season, 25 teams remain in contention for a trip to Super Bowl XLVIII.

That ties for the fourth-most teams remaining in contention with three weeks to play since the NFL instituted the 16-game schedule in 1978.

The most teams remaining in contention for a trip to the Super Bowl with three weeks to play since 1978:

The Broncos can challenge the single-season record for total yards per game, which was set in 2011 by the New Orleans Saints (467.1).

Here's the NFL teams with the most total yards per game in a single season:

New England Patriots quarterback Tom Brady has won 146 regular-season games as a starting quarterback for the Patriots, the fifth-most of any player in NFL history.

With a win on this Sunday against the Miami Dolphins, Brady can tie Pro Football Hall of Famer Dan Marino (147 wins) for fourth on the all-time wins list among starting quarterbacks.

The starting quarterbacks with the most regular-season wins in NFL history:

During his stellar career, Tom Brady has led the Patriots to 10 division titles, the most of any starting quarterback in NFL history. He can extend his record on Sunday, when New England can clinch the AFC East division title with a win or tie.

With nine division titles to his credit, Denver's Peyton Manning is currently tied with Pro Football Hall of Famer Joe Montana for the second most of any starting QB in NFL history.

Manning can join Brady as the only starting quarterbacks in history with 10 division titles. In Week 15, the Broncos would clinch the AFC West championship with a win against the Chargers and a Kansas City loss on Sunday.

The starting quarterbacks with the most division titles in NFL history:

Denver quarterback PEYTON MANNING leads the NFL with 45 touchdown passes in 2013, which is already tied for the fifth-most in a season in NFL history.

Manning, who needs six more TD passes to surpass TOM BRADY's single-season NFL record of 50 in 2007, can move up the all-time single-season list against the Chargers tomorrow night on Thursday Night Football.

The players with the most touchdown passes in a season in NFL history:

Cleveland wide receiver Josh Gordon has totaled at least 125 receiving yards in each of his past four games, tied for the third-longest streak in NFL history.

With 125 receiving yards on Sunday against Chicago, Gordon would tie CALVIN JOHNSON (five in 2012) and PAT STUDSTILL (five in 1966) for the longest such streak in NFL history.

The players with the most consecutive 125-yard receiving games:

Gordon has seven total 125-yard receiving games in 2013, which is already tied with MARVIN HARRISON (seven in 2002) for the third-most such games in a single season.

Gordon can tie Johnson (eight in 2012) and Pro Football Hall of Famer LANCE ALWORTH (eight in 1965) for the most 125-yard receiving games in a season in NFL history.

The players with the most 125-yard receiving games in a season: