The Decline of War? 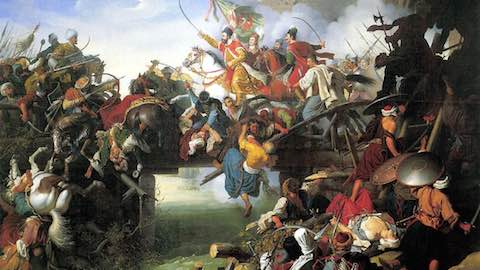 The Decline of War?

We've heard that war is on the decline, but is it true? Tanisha Fazal isn't convinced. While traditional forms of warfare may indeed be declining, new technologies -- from 'killer robots' to cyber weapons -- are shifting organized violence into new domains.

The surprising claim that war is on the decline has been widely publicized and is close to becoming part of conventional wisdom. Recent challenges to this claim have questioned its empirical validity. Many of these challenges center on how war is, or ought to be, defined. Although war may be in decline according to traditional definitions of war, new technologies of warfare – from improved military medicine to drones – themselves challenge these traditional definitions of war. This means that, while traditional war may be in decline, new forms of war may be replacing it.

The Declinist Theory of War

To suggest that war is in decline is to stake out a controversial position. Ongoing conflicts in Ukraine, Syria, Iraq, and, most recently, Yemen have claimed hundreds of thousands of lives and altered millions more forever. Israel and Iran threaten each other on a frequent basis, and China’s rise has both its neighbors and other great powers worried, such that Japan is considering revising its constitution to allow a standing army.

Authors like Steven Pinker, Joshua Goldstein, and John Mueller have therefore taken a brave stand in making the argument that war is in decline. Mueller was the first to point out, correctly, that the major powers of the world have not fought a war against each other since World War II. He attributes this shift to attitudinal changes – international norms – against war-fighting amongst the great powers. More recently, Pinker, Goldstein, and others have extended Mueller’s claim beyond great power war. Their argument is that all sorts of war – war among great powers, war between states, even civil wars – are in decline, and have been for decades if not centuries. Pinker goes on to suggest that this decline is due to a sort of civilizing, humanitarian evolution – both interpersonal and inter-group norms have changed such that human lives are much more valued today and violence is not a default solution for conflict resolution. Without disagreeing with Pinker, Goldstein credits the postwar international institutional arena – specifically, the UN system and other members of the international community committed to the principles embodied in the UN Charter – with preventing conflicts before they start and creating alternative conflict resolution spaces.

Not surprisingly, these controversial claims have elicited a number of responses. A group of anthropologists has challenged Pinker’s presentation of tribal societies as more violent than modern societies. Elizabeth Kolbert of The New Yorker suggests that violent episodes such as European colonialism, or even high murder rates in majority African-American cities in the southern United States, are too conveniently swept under the rug. John Arquilla points out that wars in which at least a million people are killed do not appear to be on the wane. John Gray questions the role claimed by Pinker for Enlightenment thinkers in the humanitarian, civilizing revolution. And, using sophisticated statistical analysis, political scientist Bear Braumoller has argued that the trend lines that proponents of the declinist theory of war present as evidence are not, in fact, trends.

Is war in decline, then, or isn’t it?

The answer to this question depends on how one defines war. Pinker, Goldstein, et al. rely on standard lists of wars compiled by the Correlates of War Project and the Uppsala Conflict Data Program. These two lists differ primarily in the time period they cover (Correlates of War covers 1816-2007, while Uppsala covers 1946-2013) and how intense (how many fatalities) a conflict must be before it is counted as a war or armed conflict (Uppsala has a significantly lower threshold – 25 battle deaths – than the Correlates of War, which has a threshold of 1,000 combatant deaths). 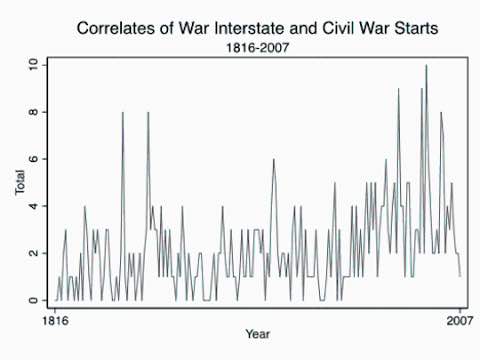 The Correlates of War Chart

The most compelling data that proponents of the declinist theory of war rely on to make their main empirical claim is a decrease in battle deaths since 1946. Aside from the fact that battle deaths have been on the rise since 2005, relying on battle deaths as a proxy for war is problematic for two important reasons.

First, over the same time period that battle deaths have decreased, the world has observed dramatic improvements in medical care in conflict zones. Better preventive medicine – from immunizations to childhood nutrition to field sanitation – decreases the likelihood that diseases that can fatally debilitate military forces will spread, and increases the likelihood that those who sustain an injury will survive it. Innovations and inventions including antibiotics and anesthesia, along with an improved understanding of the importance of stemming blood loss on the battlefield, greatly enhance the efficacy of battlefield medicine. Evacuation strategies have evolved alongside transportation technology; the wounded today are often transported to the nearest medical facility by car, truck, or even helicopter, rather than on foot, again greatly increasing their odds of survival. And we also see significant improvements in personal protective equipment, with today’s combatants much more likely to wear helmets and body armor that protect the parts of the body most vulnerable to fatal injuries.

Second, new technologies of warfare may require redefining war for different reasons. The traditional definitional of war and armed conflict requires at least two parties fighting each other and sustaining significant casualties. But with technologies such as drones, Clausewitz’s famous strategy of pursuing politics by other means can be increasingly one-sided. If only one side sustains casualties, is it a war? Conventional measures of war also rely on direct battle fatalities. But if a cyberattack on infrastructure produces indirect casualties, would those casualties ‘count’ as part of a war? Even more thorny – albeit also more distant – are questions around lethal autonomous weapons systems, or ‘killer robots.’ Must human life be at risk for an event to qualify as a war?

Is a redefinition of war in order?

What the proponents of the declinist theory of war have shown is that war has become less fatal. Even this finding is counterintuitive. It challenges the constant reporting of violence on airport TV screens, Facebook pages, and Twitter feeds. Whether this decline translates into a decline of battle casualties – the dead plus the wounded – is another question. My research suggests that there has been a decline in battle casualties, but that it is significantly lower than the decline in battle fatalities. Circling back to datasets on war and armed conflict, this distinction is important because conflicts must pass a specific battle death threshold in order to be included in these lists. That threshold does not change over time, even though medical care in conflict zones has improved. Thus, these data sets are likely excluding certain conflicts that would have met the battle death threshold in the past, when military medicine was less advanced. This suggests that war has become less lethal, but not necessarily less frequent.

Even if it is only battle deaths, and not war itself, that is on the decline, the question of “why?” remains. Has human society, as Pinker implies, evolved such that violence is not as acceptable as it once was? Do we have fewer disagreements, and are those that remain resolved more peacefully? The answers to these questions are likely to remain elusive for some time, but asking them raises another, equally important, question thus far unaddressed by the proponents of the declinist theory of war: even if there is less war today, to what extent can we say that there is more peace?

Tanisha Fazal is an Associate Professor of Political Science and Peace Studies at the University of Notre Dame. Fazal’s current research analyzes the strategic use of international law, particularly the law of armed conflict, as well as the changing benefits of becoming a state. She is the author of State Death: The Politics and Geography of Conquest, Occupation, and Annexation (Princeton University Press, 2007), which won the 2008 Best Book Award of the American Political Science Association’s Conflict Processes Section. She has been a fellow at the Center for International Security and Cooperation at Stanford University and at the Olin Institute for Strategic Studies at Harvard University.

"The Decline of War?"