Learning the Lessons of Ebola: Why the Spread of Disease is About More Than Just Health 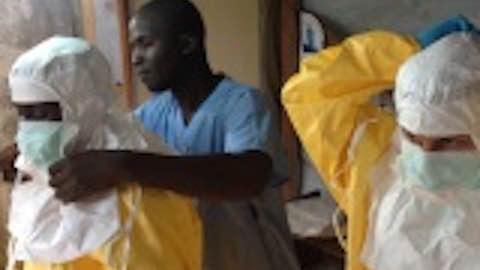 Learning the Lessons of Ebola: Why the Spread of Disease is About More Than Just Health

by Levi Maxey and Brian Finlay for ISN

Lessons of the Ebola Outbreak in Africa and its global impact

What lessons should the international community learn from its handling of West Africa's recent Ebola crisis? Levi Maxey and Brian Finlay think that there is a growing need to 1) 'think horizontally' across the health-security divide, and 2) anticipate more participants in complex global health emergencies.

By September 2014, a full nine months after the outbreak of Ebola in West Africa, hundreds of thousands of dollars in pledges of assistance sat stranded in warehouses around the globe pending shipment to the region or transfer to the field. As global supply chains shut down for fear of widening the transmission of the virus, the practical challenges of moving the requisite assistance to those most in need grew ominously for providers and patients alike. The involvement of both military and commercial airlift would become essential.

This logistics dilemma — just one of myriad challenges facing the international community as it struggled against the burgeoning Ebola crisis — is indicative of not only the interconnectivity and complexity of the crisis itself, but of the need to think beyond traditional models of crisis response. As the world now moves past the most grueling phase of the Ebola outbreak and reflects upon shortcomings in our global efforts, a few obvious lessons have emerged. These include the necessity for rapid medical responses, the need for preventive investments in health systems, and the benefits of local outreach and engagement. Yet, as the anecdote above indicates, perhaps the most important lesson learned from this particular crisis is the need to think both horizontally across the health-security divide, and ultimately, to better inculcate both public and private actors into complex global health emergencies.

The origins of the Ebola virus itself can be traced back to 1976 with simultaneous outbreaks in the Democratic Republic of Congo and Sudan. Back then, Ebola was thought not to survive well in human populations, with outbreaks halting after an average of 1.3 infections. As such, the virus did not make substantial headlines until this latest and ongoing outbreak, which has so far caused over 26,000 infections and 11,000 deaths.

Indeed, the roots of this specific outbreak — that has spread through capitals and across borders with a 60% mortality rate — can be traced back to December 2013, when a two year old boy from Guinea, who was thought to have been playing in the vicinity of fruit bats, suddenly died from an infectious disease. Originally thought to be some form of diarrheal disease or even Lassa fever, the outbreak gradually spread into Liberia and Sierra Leone. The virus was not identified as Ebola until March 2014 — a time lapse which greatly hampered international awareness of the epidemic. Upon confirmation of the presence of Ebola, Médecins Sans Frontières (MSF) along with other relief organizations, rushed to the scene.

From July to September 2014, the virus grew exponentially, particularly in Liberia, with the number of cases doubling every three weeks. At this point the outbreak still lacked a coordinated response, and it was estimated that there would eventually be a minimum of 1.2 million cases of Ebola across the region if not contained. Astonishingly, it was not until September 2014, when new infections were at a rate of 800-1,000 per week, that the United Nations Security Council determined that the outbreak presented a threat to international peace and security. The Council voted to establish the United Nations Mission for Ebola Emergency Response (UNMEER), to coordinate international relief efforts. Ultimately, this security frame placed around the outbreak helped to rally a global response — with inputs from national governments, international and regional organizations, and over 500 NGOs. On May 9, 2015, Liberia, the country worst affected by the outbreak, was declared Ebola-free. While this is indicative of great progress, there are still efforts to eradicate the disease in coastal Guinea and western Sierra Leone, where there remains 20-40 new infections per week.

Accordingly, the Ebola crisis clearly demonstrated both on the national and international level that there is a recognized deficiency of preparedness for a health crisis of this proportion. A functional national public health system is clearly an imperative, even if it requires supplementation by a rapid responding, international public health presence in-country. Inculcation of these lessons will doubtlessly improve our collective response to the next crisis — and ultimately save lives. But the failure to recognize that these complex health emergencies have transitioned from a purely public health crisis to those necessitating coordinated responses with both the security sector and private industry must become part of the new narrative for future planning.

The size, scope and nature of the Ebola outbreak also laid bare the potentially significant security consequences of a global health emergency. In a globalized economy, Ebola - like SARS and Bird Influenza before it - demonstrated the ease with which local contagions can become global outbreaks or even epidemics. In turn, these findings suggest especially dire consequences should a disease be deliberately propagated to cause harm. On the back end, the impact of the crisis included corrosive behavioral changes based on the fear of contagion that stalled the response, resulting in the disruption of agriculture, leading to food insecurity, while also restricting transportation through border and airspace closures that limited access for humanitarian workers and essential supplies. Other heavy-handed responses included large scale military quarantines and curfews that led to frustration and distrust among the populations, and resulted in riots and attacks against aid workers.

From a macro perspective, the Ebola outbreak ultimately hindered the development process and state capacity in the most affected countries. In fact, the long term costs of Ebola will be cataclysmic, in spite of the unprecedented — if late — global response, valued at over $3.2 billion. Ebola-affected countries are expected to lose an estimated $1.6 billion in 2015, worth 12 percent of their cumulative GDP, while sub-Saharan Africa as a whole might experience losses of between $500 million to $6.2 billion. These losses will build on existing insecurity in the region by magnifying issues like food shortages and poverty that inherently contribute to instability.

The US military’s Operation United Assistance in Liberia exemplifies the health-security nexus. Tasked with supporting USAID in outbreak containment, the US military presence in Liberia was greater than of the entirety of the Liberian armed forces with around 2,500 personnel deployed. They were able to build treatment centers, reducing blood test results from 2-3 days to three hours. Alongside the WHO, they trained local healthcare workers, and provided logistics support in cooperation with the WFP by constructing warehouses and using critical enablers like helicopters to reach isolated regions. They also contributed to the synchronization of efforts through sharing aggregated intelligence data and analysis that lent a common understanding of the state of the disease.

Beyond these immediate ties between public health and national security communities, surveying the breadth and depth of the ultimate response to the crisis demonstrates that the complexity of global health security emergencies requires unique cooperation between not only the health and security communities, but across the public-private divide. In September 2014, it was thought that an effective Ebola response would require 2,000 flights every month for healthcare workers, plus 4,000 flights per month for aid workers, and an additional 3,242 tons of equipment shipments. Yet in reaction to the burgeoning crisis, by August 2014 commercial airlines had cancelled more than one third of international flights to affected regions, reducing month flights to just 374 each month. This placed a disproportionate share of the burden on the airlift capacity of the US and other militaries, until additional logistical assistance was generated by the private sector.

The primary methods of private sector engagement revolved around financial contributions, donating priority materials, direct asset and service provisions, and overall public support for international efforts. There were efforts to coordinate through collectives such as the Ebola Private Sector Mobilization Group (EPSMG), consisting of 150 companies worldwide, and over 50,000 employees within the most affected countries. The assistance provided by companies from around the world proved vital in responding to the crisis. They contributed through the provision of drugs and other medical supplies such as personal protection equipment, transportation logistics like air freight and ambulances, communications equipment such as cell phones, and millions of dollars in financial contributions to relief organizations on the ground.

Last year, US President Barack Obama, with a coalition of like-minded governments, launched the Global Health Security Agenda to, “prevent, and detect, and fight every kind of biological danger — whether it’s a pandemic like H1N1, or a terrorist threat, or a treatable disease.” The Ebola outbreak highlighted shortcomings in large scale outbreak response in the developing world. Because critical resources did not arrive in affected communities in a timely manner, the outbreak grew and became a major international crisis. Although the GHSA predates the Ebola epidemic, its priorities hold increased relevance in the wake of the outbreak, appropriately emphasizing the need for creating stronger health systems globally, nationally and locally that cross the agriculture, defense, health, and commerce sectors.

With estimates of required global investment around $3.4 billion a year on core public health infrastructure in order to satisfy the needs for early detection, diagnosis and prompt response, there is a need to place health systems squarely into the international community’s priorities. Seven years before the onset of the Ebola crisis, the World Bank estimated it would take three years and $26 million in public health investments to bring Guinea, Liberia, and Sierra Leone up to the International Health Standards. Regrettably, none of these investments were made despite evidence that public health systems hold some of the highest rates of return. A step in the right direction would be reforming the International Monetary Fund’s (IMF) and the World Bank’s policies toward Structural Adjustment Programs (SAPs) so that public health infrastructure is viewed as an essential prerequisite in promoting economic productivity and development.

With a stronger emphasis on global health, countries can take preventative measures through immunizations while diseases can quickly be detected and tracked through surveillance systems. The importance of health systems becomes more convincing when considering the certainty that new organisms will emerge, the likelihood of increased drug resistance, and the possibility that microbes might be readily used as a bioweapon in the future.

Under the same banner of improving global preparedness, there is also a need to create a more coherent structure in which aid can rapidly surge in to supplement overwhelmed national capacities. An important aspect of this is to improve the supply chain capacity and resilience during the time of emergency so that critical resources can arrive in a timely manner. This requires establishing a regional, multilateral mechanism to undertake deliberate transportation logistic planning for crisis contingencies. This mechanism could identify logistical resources that could be committed and facilitate the coordination and integration of any international effort.

None of these priorities can be met by public health authorities alone. Rather, they necessitate the combined talents and resources of a fully coordinated public security sector, along with the committed involvement of private industry actors.

Levi Maxey works with the Managing Across Boundaries Initiative at Stimson. Brian Finlay is the Vice President of the Stimson Center.

"Learning the Lessons of Ebola: Why the Spread of Disease is About More Than Just Health"