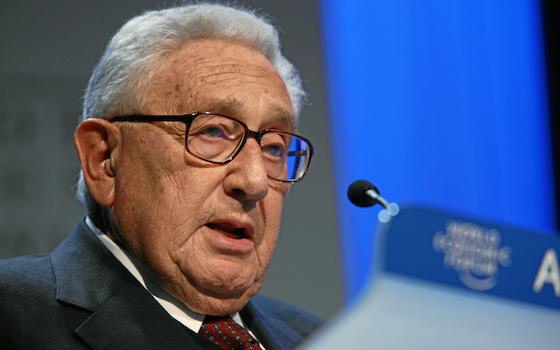 How have Henry Kissinger's views on diplomacy evolved over time? Daniel Fiott thinks that Kissinger's latest work confirms 1) he has less faith in historical precedents, and 2) he believes that stability in a post-Western world will depend on accommodating value systems as much as power politics

This short piece is an attempt to sketch out, however tentatively and briefly, the similarities between three of Henry Kissinger’s best-selling and most influential books. The first is A World Restored: Metternich, Castlereagh and the Problems of Peace, 1812-22

, which was submitted as a doctoral thesis by Kissinger in 1954 before making it into print in 1957. The second is Diplomacy

The third is his most recent and perhaps final offering, World Order: Reflections on the Character of Nations and the Course of History

There is no doubt in the mind of this author that comparisons between these texts will eventually form the basis of a doctoral thesis. However, the point of this short essay is to see how, if at all, Kissinger’s views on the conduct and ultimate aim of diplomacy have changed over time. It is thus a consciously brief exploratory exercise rather than a definitive account.

Kissinger’s first book was essentially a study of the corrupting effect of revolution on world – or, more specifically, European – order. Kissinger’s (thinly masked) parallel between Napoleon and Hitler made the point that revolutionary powers – defined as those states that seek to overturn the established global order – were intrinsically threatening to world peace. It was up to the reader to make the link between Napoleon, Hitler and the growing power (at the time of writing) of the Soviet Union. Revolutions, wherever they arose, needed to be eradicated or, at best, contained.

A World Restored sought to offer diplomats and statesmen of Kissinger’s era a policy with which to deal with ‘revolution’. Kissinger wrote largely through the voice of Prince Klemens von Metternich, even though he refuses to see the Austrian as an antecedent version of himself. Metternich’s conduct of diplomacy – largely supported by the British Viscount Castlereagh – rested on a simple equation: world order is maintained by ensuring that overwhelming power is ready to combat any revolutionary movement that threatens the system as a whole. This naturally implied that alliances would be formed on an ad hoc basis to crush threats to the system. The sanctity of the system itself was more important than sectional or national interests, even though the national interest was supposedly guaranteed through the maintenance of the system as a whole.

Revolution held a particularly important place in Kissinger’s thinking. Critics have suggested that Metternich was more interested in maintaining the monarchical system in Europe (and his personal place at the heart of this system) at the expense of the popular aspirations of certain European peoples. Many people tend to forget that Kissinger experienced revolution as a young man; he fled Nazi Germany as a young refugee after seeing his hometown razed to the ground. Metternich provided a mechanism to contain these types of revolutionary movements and lauded the ‘hundred year peace’ that had been established by the 19th century balance of power. It was a mechanistic system but it had brought many people in Europe peace and economic growth, at least until the balance ended in 1914 with world war.

Kissinger’s second major book on world order was Diplomacy, a work published in the aftermath of the Cold War. Here, Kissinger was obviously keen to understand what an abundance of American power would mean for world order. Given the United States’ triumph over communism, the temptation to forge a world order based on American values and interests was strong. Again, Kissinger was keen to draw parallels between the contemporaneous world order and the 18th and 19th centuries. As he explained, ‘[t]he absence of both an overriding ideological or strategic threat frees nations to pursue foreign policies based increasingly on their immediate national interest […] order will have to emerge much as it did in past centuries from a reconciliation and balancing of competing national interests’ (p. 805).

In Kissinger’s mind, this was an important feature of the post-Cold War world. He was now less afraid of revolutionary powers having the ambition or capacity to overthrow the system, mainly because of the superpower status of the United States. More worrying was the tendency of other states to take American power for granted or to be aggrieved by it to the point of accruing their own power, in pursuit of their own national interests, without due regard for the system’s stability. From one perspective, this could be seen as Kissinger’s way of saying that, as the global superpower, America’s will would be done. Alternatively, one can take seriously Kissinger’s point that it is systemic breakdown – regardless of who runs the system – that must be avoided at all costs.

Diplomacy ’s main aim, however, was to counsel against the abuse of US power in the post-Cold War era. This is why Kissinger was keen to press the point that world order is not a static phenomenon or an end goal in international relations. His advice to American leaders was not to revel in America’s preponderance of power or to seek to forge a world order based on American values and interests. Instead, he wanted American leaders to use the power they had to deal with future changes to world order. When one considers the gradual ascent of China, Russia’s recent behavior and the folly of war in Iraq, Kissinger’s advice seems sensible. In other words, Kissinger feared that the irresponsible exercise of American power could jeopardise the very system it controlled. He believed that while American values were to be celebrated, changing the international system to reflect those values would have to be incremental.

In light of the two others discussed above, Kissinger’s latest book is intriguing. Its themes, especially salient towards the end, are the role of technology and the challenge of globalization. While these themes are not new to Kissinger, their complexity challenges his earlier tendency to use historical generalizations to craft contemporary policy. In a sense this should not surprise the reader. The pace of technological change and the extent of globalization have increased significantly since the publication of A World Restored in the mid-1950s. This is not to say that Kissinger has given up on history lessons, as his book still refers to the Peace of Westphalia, the Congress of Vienna and the Ottoman Empire.

Rather, Kissinger now appears to have less faith in historical precedents than he once did – even if he remains a master of international history. In the final paragraph of World Order, Kissinger writes: ‘Long ago, in youth, I was brash enough to think myself able to pronounce on ‘The Meaning of History.’ I now know that history’s meaning is a matter to be discovered, not declared’ (p. 374). He even summons the spirit of Heraclitus to announce that history is like a river into which ‘you cannot step twice’. What is one to make of this conclusion?

In one sense it strengthens his argument that world order cannot be sustained by power alone, for order also requires legitimacy. In this sense, he is perhaps ready to accept that Metternich’s system of order had to eventually fall away because it was not popularly seen as legitimate in a majority of nation-states. For Kissinger, the central point statesmen must recognize is that world order requires legitimacy, but that legitimacy is increasingly difficult to define. World Order is a book that still celebrates the unique American experience and Kissinger still extols the virtues of US internationalism, yet it also grapples with the difficulties of multipolarity. Kissinger recognizes that the present system is not aimed at containing revolution, nor is it necessarily just about national interests. Instead, Kissinger describes the coming world order as one of regional powers interacting with one another in order to find a mutually agreed-upon definition of legitimacy.

Kissinger still sees the ‘West’ as the most important region in the world, although he lambasts Europeans for being overly committed to values without necessarily having any power. Europe obviously features rather prominently in Kissinger’s works. In Diplomacy, for example, he makes the familiar comment that the European Union represents a response to the relative decline of individual European states. Back in 1994, Kissinger observed that the twin problem for Europe was that the project of unification was absorbing too much energy, and that the European Union (EU) did not have an automatic blueprint for how to act on the international scene (p. 24).

The EU features even more prominently in World Order. Kissinger begins on page twelve by asking an uncomfortable question: the EU was supposed to transcend power politics, but do the present ‘internal struggles of the European Union [not] affirm’ the continued existence of a balance of power in Europe? For Kissinger the EU is less a post-modern project and more a potential competitor to the United States in a Westphalian global balance of power. On this view Europe potentially returns to its global prominence but ‘this time as a regional, not a national, power, as a new unit in a now global version of the Westphalian system’ (p. 92). What prevents the EU from fulfilling the global role outlined by Kissinger?

Mainly, and this is perhaps where Kissinger falls in line with federalists, the EU’s occupation of a ‘no mans land’ somewhere between, on the one hand, national sovereignty, and on the other, regional autonomy. Kissinger assumes there can be no return to national sovereignty, but he is equally aware that any regional unification will have the mammoth task of ensuring legitimacy. As Kissinger himself asks, ‘[how] much unity does Europe need, and how much diversity can it endure? […] how much diversity must Europe preserve to achieve a meaningful unity?’ (p. 93). Even more important for Kissinger is the EU’s overall direction, however. Is the EU Western, is it neutral or is it more inclined to cultivate its regional relationships?

Indeed, for Kissinger the real question for statesmen in Europe and the broader West, once they have acknowledged that we do not still live in a Western dominated world order, is how to ensure equilibrium between regions and ultimately the overall stability of the system. Equilibrium does not just refer to power, as the real issue for Kissinger is that the legitimacy of world order will necessarily be an accommodation of different value systems. This is not to say that Kissinger has abandoned the promise of the Western system, as he himself states that he hopes world order will come to be characterized by ‘states affirming individual dignity and participatory governance, and cooperating internationally in accordance with agreed-upon rules’ (p. 372).

From another perspective Kissinger’s conclusion may be a final personal statement. The keen reader of references will notice that in the final footnote (see p. 403) Kissinger cites his own undergraduate thesis, entitled ‘The Meaning of History: Reflections on Spengler, Toynbee and Kant’, which he wrote at Harvard in 1950. He has thus come full circle on his life of academic writing. In this respect one can perhaps discern two points about World Order. The first is that even after a life of writing and diplomacy, Kissinger is still not sure if he has the ultimate answer about international politics. The second point is that perhaps, after a life in the global spotlight, Kissinger wants us to assess the decisions he took while in office in light of their overall, historically contextualized, impact, rather than by the historical prejudices of the present period. This second point will not please Kissinger’s critics but it will no doubt ensure that Kissinger – perhaps like Metternich – remains the focus of study for political science and international relations students for decades, if not centuries, to come.