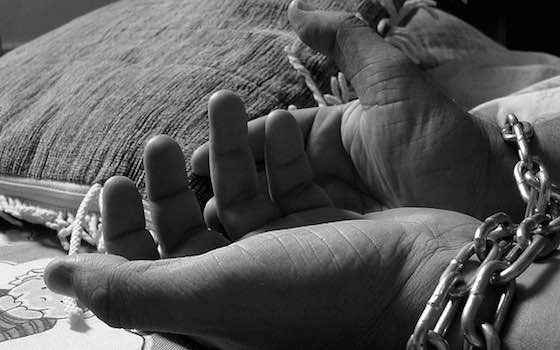 Should the private sector play a larger role in fighting human trafficking? Shannon Dick believes so. Not only will its involvement help avoid 'siloed' policy responses, it will also encourage a more entrepreneurial approach to identifying and mitigating the worldwide threats posed by traffickers.

In April 2014, Boko Haram shocked the world when it stormed a secondary school in Chibok, northeastern Nigeria, and abducted over 200 girls. This tragedy was immediately condemned by the wider international community and prompted a campaign to “bring back our girls.” Ten months later, many of the girls are still missing – with reports that some may have been sold or otherwise enslaved. This horrific event shined a light on the issue of human trafficking, a perennial but often overlooked challenge that affects millions worldwide.

The far-reaching impact of human trafficking and its implications for security and development highlight the need for more integrated responses to better leverage the expertise of industry and civil society. Human trafficking is inextricably linked to poverty, violence, and corruption, and therefore necessitates a whole-of-society approach to mitigate and ultimately prevent this transnational challenge.

The scale of the problem

Modern-day slavery remains deeply entrenched in societies around the world. Every year hundreds of thousands of men, women, and children are forced into labor, involuntarily held as domestic servants, and trapped in cycles of sexual exploitation as traffickers take advantage of an expanding and diversifying global supply chain to prey on countless individuals. The tactics adopted by organized criminal groups and other illicit actors pose a direct challenge to government efforts – which often cannot keep pace with traffickers’ evolving schemes – and negatively impact security, development and economic interests worldwide.

Globalization has broadened the scope of this trade. While it has provided greater economic opportunities to communities around the world, globalization has also unwittingly exposed millions of people to the depravity of organized criminal syndicates and other nefarious actors. As the demand for goods and services has increased, so too has the demand for labor – particularly cheap labor – at times existing in the shadows of the legitimate workforce.

And as the increased availability of weapons has helped fuel armed conflict and subsequently displaced millions of people worldwide, so too has it put more people at risk of exploitation by traffickers. These actors take advantage of vulnerable populations and of new international networks and technologies to advance their own illicit activities, while trafficking victims go largely unnoticed. As US Secretary of State John Kerry noted, of the estimated 20 million people who fall victim to human trafficking, the international community has only been able to identify about 44,000 survivors. And these figures likely underestimate the true scope of the challenge, as many victims refrain from disclosing their plights for fear of retribution.

In 2005, the International Labour Organization estimated that the global illicit profits of human trafficking totaled around $32 billion. Nearly ten years later, that estimate has climbed to more than $150 billion in illegal profits each year. As these funds are diverted from the legitimate economy, they fill the coffers of illicit actors and help facilitate a host of other criminal activities – from gunrunning, to illegal drug transfers, and even terrorist activities. Indeed, the human trafficking-terrorism nexus was perhaps most recently made evident by the actions of the Islamic State in Iraq and Syria, which released guidelines for enslaving women and girls.

Though occasionally prescribed as a distinct problem of the developing world, human trafficking knows no bounds, and developed and developing countries are affected by this crime alike. Sweden, for example, is both a destination and a source country for trafficked persons, with suspected victims originating from at least 20 different countries in Eastern Europe, Africa, and Asia. Similarly, the United States remains a destination country for victims of forced labor and sexual exploitation, with an estimated 100,000 children exploited through prostitution every year. Though exact figures on human trafficking are difficult to determine, the challenge remains global in scope and continues to impact millions worldwide.

A number of national and regional strategies have since been developed to better recognize, address, and combat human trafficking. The Council of Europe Convention on Action against Trafficking in Human Beings, for example, not only requires countries to adopt measures to criminalize human trafficking, but also calls on them to strengthen their border controls to prevent and deter trafficking incidents. And the Arab Charter on Human Rights prohibits all forms of human trafficking and exploitation. However, as with other international agreements, without the political will to implement and enforce, their promises of global change remain hollow.

According to U.N. reports, more than 140 countries have passed legislation to criminalize human trafficking. Yet, while this represents significant international recognition of the crime, many laws remain limited due to discordant implementation and enforcement. This has provided traffickers with plenty of opportunities to exploit massive loopholes in national legislation. For instance, some national laws do not cover all forms of human trafficking, but instead only address certain aspects of the larger challenge – such as sexual exploitation – while others are not consistently enforced. In fact, the U.N. found that between 2010 and 2012, nearly 40% of countries with established anti-human trafficking laws reported less than 10 convictions against traffickers per year. As a result, illicit actors continue to traffic people across national and regional boundaries with relative impunity.

Thus, while these and other efforts help address the global human trafficking challenge, reports of trafficking incidents persist, which raise questions about the impact such efforts have had on mitigating and ultimately ending the problem. There is a need for more integrated responses that leverage private sector innovations to better address the broader scope of the challenge.

The private sector is well positioned to add to existing efforts to combat human trafficking, due to the wide array of resources at its disposal and the varying levels of influence it can exert on certain countries. The U.N. Special Rapporteur on trafficking in persons has noted that some multinational corporations comprise larger economies than many developing countries. This, in turn, means that private companies can leverage economic as well as political and social influence in areas where they operate in order to deter human trafficking activities.

Indeed, there are many examples of industry-led initiatives aimed at combating human trafficking. These include efforts to enhance inter-workplace recognition of risk factors associated with trafficking as well as broader corporate social responsibility programs. The travel service company Sabre, for example, has established its “passport to freedom” initiative to increase awareness of and better educate the travel industry on human trafficking issues. Additionally, the Global Business Coalition Against Human Trafficking – a joint venture involving some of the world’s leading multinational corporations – seeks to leverage the resources of industry to prevent and ultimately end all forms of the activity. This includes the development of best practices to reduce the risk of human trafficking in supply chains and developing training resources for companies to better understand how trafficking affects business operations.

The private sector is also teaming up with civil society organizations in order to develop more pragmatic approaches to human trafficking. The computer software company Palantir recently teamed up with the Polaris Project – a nonprofit, anti-human trafficking organization based in Washington, D.C. – to help streamline its hotline for trafficking victims. Palantir’s software allows Polaris to aggregate data based on geographical location of the victims – as well as other important information including immigration status, potential shelter requirements and resource needs – in order to provide necessary assistance faster and to better understand larger trafficking trends. Other tech giants including Google and Microsoft have developed similar initiatives to provide information-sharing platforms and learning tools to help governments and nonprofits combat human trafficking.

Industry engagement in anti-human trafficking efforts provides for a more comprehensive and integrated response and safeguards against potentially damaging risks. Businesses are often impacted by human trafficking, and can be co-opted into facilitating this crime within their supply chains without intent. Although often unwitting participants in the human trade, industry may face financial and reputational risks in the form of fines or criminal charges, as well as potential loss of profits or limited opportunities for growth. The resulting tarnished corporate image, reduced demand for products, disenchanted workforce, and damaged relations with partners or potential investors may create insurmountable burdens for many businesses.

The complex and interconnected issue of human trafficking requires a broad and far-reaching global effort to curb this inimical practice. This is particularly important because human trafficking has implications for other social policies as well as for international security and development – and efforts to prevent it require concerted action across the public and private sectors to pool insights and expertise, and move beyond siloed policy responses. By better leveraging private sector innovations and civil society expertise, international responses to human trafficking can cultivate valuable tools to help identify and mitigate trafficking threats. In the end, governments will be able to better enforce anti-human trafficking legislation and hold traffickers accountable in an effort to hinder and ultimately end the global trade in human beings.