How Aggression Went From an Act of War to a Pathology 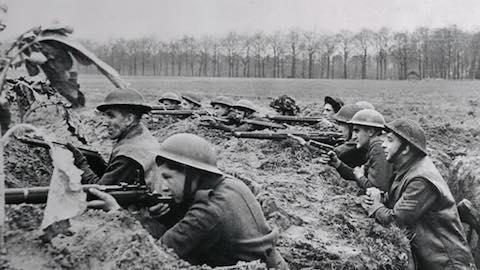 How Aggression Went From an Act of War to a Pathology

Viewing a state's aggression as pathology incurred punishment, not the understanding one might expect. (Photo: Bettman / Corbis)

Aggression by a state, once considered just an act of war, ultimately became viewed as a pathological act.

for a book I'm attempting to write about the rationalizations and counterintuitive strategies that inevitably attend a state's development of nuclear weapons. (For his part, Freedman has written around 20 books.)

In the first part of The Evolution of Nuclear Strategy, Third Edition

, Freedman chronicles the rise of air power during the 20th century. He writes that, in the nineteenth century, the concept of aggression referred to a "‘military attack by the forces of a state against … another state.'" But, even before World War I, "the term had become pejorative, referring to a military attack that was not justified by law."

Then, after World War II, "the distinction between peace-loving and aggressive states was" actually "adopted as a guide to the proper assignment of blame for the outbreak of war." In fact, aggression came to be seen as "the most deviant form of international behavior. … As it inevitably led to disaster, it could never be an act of men possessed of rationality and moral sensibilities, who would use peaceful means to settle disputes." [Emphasis added.]

The adoption of violent means betrayed more than an aggressor's strategic calculus. It also betrayed something about the nature of his society. It was symptomatic of a particular culture, one that bred in profusion ‘authoritarian' or ‘aggressive' personalities.

War "was an irrational act and thus had an irrational cause. … Social scientists and psychologists, convinced of the essential irrationality of war, searched for its causes in the alienation of industrial man, patterns of child-rearing, the ambition of megalomaniacs, the dreams of political utopias, and the potency of unthinking nationalist, rather than such mundane things as geographical vulnerabilities, a sense of grievance, or straightforward conflicts of national interests." In other words, use of the term aggression, "confused a military judgment with a moral stance."

In consequence, aggressors could not be relied upon to listen to reason. What they might listen to was their own language -- that of force.

Ironically, that runs counter to the current trend of behaviors -- from addictions to aggression -- classified as illness in the DSM (the Diagnostic and Statistical Manual of Mental Disorders), thus paving the way for more humane forms of treatment (theoretically, anyway). Aggression, once classified as deviant behavior, only subjected states to unequivocal punishment (or the threat thereof).

Too bad psychopharmaceutical drugs couldn't be administered to a whole nation as a means of heading off incipient aggression at the pass (kidding!). Anyway, that became the operating principle with which the West then dealt with Russia.

"How Aggression Went From an Act of War to a Pathology"