World Bank Is Refereeing a Race to the Bottom 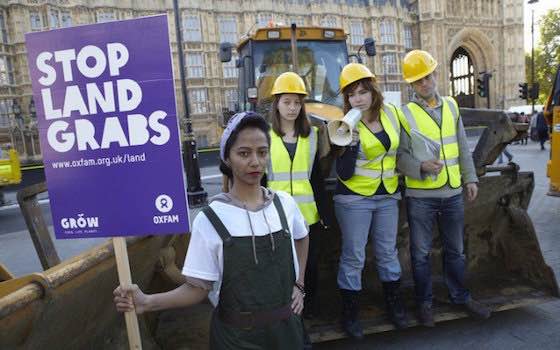 World Bank Is Refereeing a Race to the Bottom
(Photo: Oxfam International / Flickr)

Instead of ranking countries by their 'business friendliness,' the World Bank should rank corporations according to their social responsibility

There has been considerable pushback on this ranking system from civil society groups around the world. One of the critics, the Oakland Institute, invited me to provide an alternative business perspective on the Doing Business report at an event last October at the World Bank.

My co-panelists gave first-hand testimony about how this ranking system has encouraged the trend of massive private investment in farmland in developing countries. As private corporations and wealthy investors have acquired millions of hectares through such "land grabs," thousands of small-holder farmers and other rural residents have been displaced, disappeared, and even killed.

At the demand of the G8, the World Bank is now developing a new project -- called "Benchmarking the Business of Agriculture" -- to apply the Doing Business approach to agribusiness. To his credit, World Bank President Dr. Jim Yong Kim has acknowledged that large-scale land acquisitions threaten a way of life for thousands. But unfortunately little has changed on the ground, and the Bank staff's response to our panel was dismissive at best.

The annual Doing Business report, now in its 13th year, remains very influential. Countries have often implemented so-called reforms solely to move up in the ranking. As the chair of the board of Ben & Jerry's corporation, I've seen firsthand how a high-road approach to environmental and labor standards can be good for people and the planet -- as well as the bottom line.

But we know that the major corporate lobby groups are constantly trying to eliminate any and all of these "pesky" regulations. A fundamental question remains as to whether the Doing Business list is a ranking system or merely a tool to deregulate business, lower taxes, and shift control of the world's most fertile land from small-holder farmers to large, private-sector companies.

Our panel called for an end to these rankings. In its place I would suggest a system that ranks corporations instead on how they have impacted the people and the communities where they do business.

Some of the questions to ask include: What has been a company's track record on providing good quality jobs, ensuring safe working conditions, living up to basic environmental standards such as water and air quality, fulfilling its promises, being transparent, staying in communities, and paying its taxes?

And most importantly for an agribusiness venture, has it shown respect and deference to indigenous men, women, and children?

We know that the private sector is the biggest advocate for using measurements as an instrument for change. They recognize that what you measure influences what you work on. So shouldn't we encourage a race to the top and not to the bottom?

A little competition to be ranked as the best corporate citizen based on what you do and how you do it might create a very important challenge. We know that there have been other rankings of corporate social responsibility, but never by an organization with the World Bank's purse power. Maybe this could be a game-changer.

If the World Bank wants to prove its commitment to reducing poverty, it will need to ensure that only those corporations with demonstrated commitments to this goal -- and to the goals of climate justice and respect for human rights -- are allowed to flourish.

"World Bank Is Refereeing a Race to the Bottom"