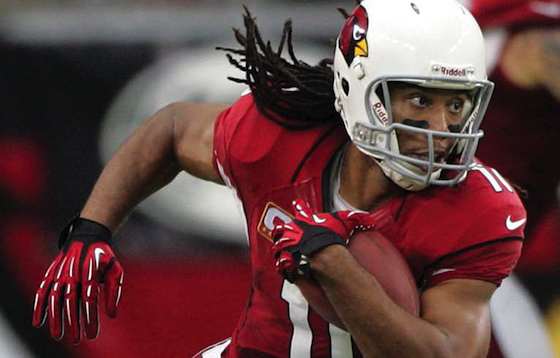 Arizona wide receiver Larry Fitzgerald had five catches for 52 yards and two touchdowns in the Cardinals' 40-11 win over the Indianapolis Colts. Fitzgerald has 11,019 career receiving yards and became the youngest player in NFL history (30 years, 85 days) to reach 11,000 receiving yards. The previous mark was held by Randy Moss at 30 years, 222 days.

The most games decided by seven points and eight points or fewer through Week 12:

NFL teams have combined to score 48 interception-return touchdowns through Week 12 this season, the second-most INT-TD returns through 12 weeks since 1970 (50 in 2012).

The most interception-return touchdowns through Week 12 since 1970:

Manning (36) leads the NFL in TD passes and registered his third season with at least 35 passing TDs, tying Tom Brady and Brett Favre for the most such seasons in NFL history.

The quarterbacks with the most seasons with at least 35 touchdown passes in NFL history:

Dallas quarterback TONY ROMO threw for 234 yards and two touchdowns in the Cowboys' 24-21 win over the New York Giants.

The tight ends with 700 receptions and 9,000 receiving yards in NFL history:

Saint Louis Rams rookie wide receiver-punt returner Tavon Austin had a 65-yard touchdown run in the Rams' 42-21 win over Chicago. Austin had touchdown receptions of 81 and 57 yards and a 98-yard punt-return touchdown in Week 10, the Rams' last game.

Austin is the first player in NFL history to record a 95+ yard punt-return touchdown, an 80+ yard receiving touchdown and a 65+ yard rushing touchdown in a single season.

He joins Pro Football Hall of Famers Jim Brown (1963) and Gale Sayers (1965) as the only players in NFL history to score four touchdowns of at least 50 yards in a two-game span in a single season.

San Diego Chargers quarterback Philip Rivers passed for 392 yards and three touchdowns in the Chargers' 41-38 win at Kansas City. Rivers has passed for at least 390 yards in four games in 2013 and tied Pro Football Hall of Famers DAN MARINO (1984) and JOE MONTANA (1990) for the most such games in a single season.

Detroit Lions wide receiver Calvin Johnson had seven catches for 115 yards in the Lions' 24-21 loss to Tampa Bay. In his past five games, Johnson has 861 receiving yards, the most in NFL history for a five-game span in a single season. The previous mark was 822 yards set by CHARLEY HENNIGAN in 1961.

Cleveland Browns wide receiver Josh Gordon had 14 catches for 237 yards and a touchdown in the Browns' 27-11 loss to Pittsburgh. Gordon, who set a single-game franchise record for receiving yards, recorded the fifth 200-yard receiving games this season. With two games still to play, that total is the second-most through the first 12 weeks of a season since the 1970 merger (six in 2012).

Carolina Panthers tight end Greg Olsen caught the game-winning touchdown pass with 43 seconds remaining in the Panthers' 20-16 win at Miami. Carolina, which extended its winning streak to seven games, is the first team since the 2011 Houston Texans (December 11, 2011) to extend a winning streak to at least seven games with a game-winning, come-from-behind touchdown in the final minute of the fourth quarter.

The quarterbacks with the most career passing yards in NFL history:

Minnesota running back Adrian Peterson rushed for 146 yards and a touchdown in the Vikings' 26-26 tie with Green Bay. Playing in his 100th career game, Peterson has 9,846 rushing yards, the third-most in NFL history for a player's first 100 games. He passed Pro Football Hall of Famer Barry Sanders (9,766) and only trails Pro Football Hall of Famers Eric Dickerson (10,818) and Jim Brown (10,403).

Peterson has 10 rushing touchdowns this season and joined Tomlinson (nine) and Smith (eight) as the only players in NFL history to rush for at least 10 touchdowns in seven different seasons.

The players with the most rushing yards through their first 100 career games:

NFL running backs with the most seasons with 10+ rushing TDs in NFL history: