Week 13 Kicks Off With Thanksgiving Tripleheader 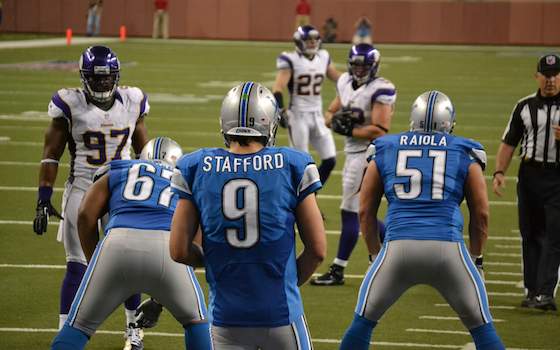 Entering Week 13 of the 2013 NFL Regular Season, there are 24 teams either in or within one game of a playoff spot. And with five weeks to play, nothing has been settled.

"From here on in, the only statistic that matters is winning games," says Arizona Cardinals head coach Bruce Arians, whose team has won four in a row and improved to 7-4. "Whatever we have to do as a football team to win a game, that's all that matters. We've put ourselves in a position now where that's all that really does matter."

Week 13 begins on Thursday with a Thanksgiving tripleheader for the eighth consecutive year.

Traditional competitors Detroit and Dallas will host games during the day followed by a primetime nightcap on NBC featuring AFC North rivals.

All six teams playing on Thanksgiving are either in or within one game of a playoff spot.

Green Bay quarterback Matt Flynn, playing in relief, led the Packers back from a 16-point fourth-quarter deficit in the team's 26-26 tie against Minnesota. Flynn passed for 480 yards and six touchdowns -- both franchise records since tied by AARON RODGERS -- in his last start against the Lions (January 1, 2012).

At 5-5-1, the Packers are just a half-game behind Chicago (6-5) and Detroit (6-5) in the NFC North. The Lions, who will play their 74th Thanksgiving Day game, dropped a 24-21 decision to Tampa Bay last week. Detroit wide receiver Calvin Johnson has 861 receiving yards in his past five games, the most in any five-game span in a season in NFL history.

The Cowboys are 28-16-1 on Thanksgiving and quarterback Tony Romo has won five of his six starts on the holiday.

Last week, Romo threw two touchdown passes to tight end Jason Witten as Dallas (6-5) defeated the New York Giants 24-21 and moved into a tie for first place in the NFC East with Philadelphia (6-5).

The Raiders dropped a 23-19 decision to Tennessee last week but are just one game behind the teams tied for the final Wild Card berth in the AFC race.

The Steelers and Ravens are tied in the standings at 5-6 and are among the six teams tied for the final playoff berth in the AFC.

Pittsburgh has won three games in a row, including last week's 27-11 win at Cleveland. In his past two games, Steelers quarterback Ben Roethlisberger has thrown six touchdown passes and no interceptions. Baltimore's defense limited the New York Jets to 220 total net yards and quarterback JOE FLACCO threw a 66-yard touchdown pass to wide receiver Jacoby Jones in last week's 19-3 win. The Ravens are 4-1 at home this season.

For only the second time since the 1970 merger, the top two teams in each conference will meet in the same week at least 10 games into a season (Week 16, 2008).

The Cardinals and Eagles combined to post a perfect 6-0 record in November. Arizona has won four in a row -- 3-0 in November -- and Philadelphia has been victorious in each of its past three contests. The 7-4 Cardinals are tied for the final Wild Card berth in the NFC while the 6-5 Eagles are tied with Dallas atop the NFC East.

"It feels great to be 7-4," says Fitzgerald. "We still have five games. We have a lot of football to go against some good teams. We have a great opportunity ahead of us. We control our own destiny and that's the best you can hope for."

The Eagles averaged 33.3 points per game in November and quarterback NICK FOLES had a 152.8 passer rating, the highest by a player in any calendar month in NFL history (minimum 50 attempts). Foles leads the NFL this season with a 128.0 passer rating and is joined by running back LE SEAN MC COY, the league's top rusher (1,009 yards).

"You always want to play meaningful games," says Eagles offensive coordinator PAT SHURMUR. "Fortunately, we've put ourselves in a position to do so. What's most important is that we take it as a one-game season and this week is the most important one. And now that's the Arizona Cardinals because that's the next game."

Cincinnati enters Week 13 with a two-game lead in the AFC North. The Bengals, who had a bye last week, recorded a 41-20 victory over Cleveland in Week 11. In that contest, quarterback ANDY DALTON threw three touchdown passes and is third in the AFC with 21 passing TDs this season.

"We're in a really good position right now," says Dalton. "For us as a team, we feel like we're in control of everything. And that's where we want to be at this point in the season."

The Chargers won 41-38 at Kansas City last week and moved into a tie for the final playoff spot in the AFC. San Diego quarterback PHILIP RIVERS threw the game-winning 26-yard touchdown pass to SEYI AJIROTUTU with 24 seconds remaining. Rivers finished the day with 392 yards and three touchdowns, his fourth game with at least 390 passing yards this season. Rivers tied Pro Football Hall of Famers DAN MARINO (1984) and JOE MONTANA (1990) for the most such games in a single season.

"This is one of those wins you'll never forget," says Rivers. "It was an unbelievable team effort. It's the kind of win that can save a season. Hopefully it can plunge us forward with four of our final five games at home."

The Broncos and Chiefs will meet for the second time in three weeks. Both teams enter Week 13 tied atop the division with the best record in the AFC at 9-2.

In Week 11, Denver quarterback PEYTON MANNING passed for 323 yards and a touchdown in the Broncos' 27-17 win over the Chiefs. The Broncos are 3-0 in division games this season.

The Chiefs opened the season with nine consecutive wins before the Week 11 loss to Denver. Kansas City became the first team in the four major professional sports leagues (NFL, MLB, NBA, NHL) to start a season 9-0 after finishing with the worst record in the previous year.

"There's a lot of season left and a lot can happen," says Chiefs quarterback ALEX SMITH. "We have to get back to the mentality of ‘Let's just go 1-0 this week.' We can't be looking beyond that."

The two teams with the best record in the NFC will face one another on Monday night in a game that could determine the No. 1 seed in the NFC playoffs. The Saints, who lead the NFC South, have won three games in a row. The NFC-West leading Seahawks have won six consecutive games.

New Orleans quarterback DREW BREES has won nine starts in a row on Monday night with a 123.6 passer rating. Last week, in the Saints' 17-13 win at Atlanta, he surpassed Pro Football Hall of Famer WARREN MOON (49,325) and moved into fifth place in NFL history with 49,566 career passing yards. Saints tight end JIMMY GRAHAM has six 100-yard games in 2013, tied for the most in a single season by a tight end in NFL history.

"This is one of those venues that separates itself from the others," says Saints head coach SEAN PAYTON about Seattle's CenturyLink Field. "Their fans are passionate. They love their team. It presents challenges and it's something we're going to have to be good at and be able to handle. Add in that it's a Monday night game on top of it and I'm sure it will be a real loud environment up there." The Seahawks, who had a bye in Week 12, are 10-1 for the first time in franchise history. At home, the team has won 13 consecutive games. Seattle quarterback RUSSELL WILSON, who is 13-0 as a starter at home, has a 117.0 passer rating at CenturyLink Field and had a career-best 151.4 passer rating in Week 11's win over Minnesota.

Week 13 Kicks Off With Thanksgiving Tripleheader