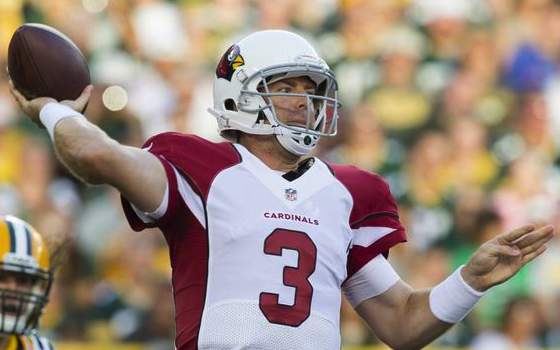 Cardinals Quarterback Carson Palmer, Buccaneers linebacker Lavonte David and Vikings kicker Blair Walsh are the NFC Players of the Week for the 12th week of the 2013 season

Palmer completed 26 of 37 passes (70.3 percent) for 314 yards with two touchdowns and no interceptions for a 114 passer rating in the Cardinals' 40-11 win over Indianapolis.

In Week 11, he completed 30 of 42 passes (71.4 percent) for 419 yards with two touchdowns and no interceptions for a 119 passer rating. Palmer is the first player in franchise history to pass for at least 300 yards, complete 70 percent of his passes and record a 110 passer rating in back-to-back games. He and Denver's PEYTON MANNING are the only quarterbacks to accomplish the feat this season.

Palmer and KURT WARNER are the only Cardinals to complete at least 70 percent of his passes and throw for 300 yards in consecutive games.

During Arizona's current four-game winning streak, Palmer has completed 89 of 129 passes (69 percent) for 1,146 yards with eight touchdowns and two interceptions for a 110.8 passer rating.

With 314 yards against the Colts, Palmer now has 32,352 career passing yards and passed Warner (32,344) on the NFL's all-time passing yardage list.

He is the first Cardinals quarterback to be named Player of the Week since Warner in 2009 (Week 13).

David had 12 tackles, an interception and a forced fumble in the Buccaneers' 24-21 win at Detroit.

He is the first player this year to record at least 12 tackles, an interception and a forced fumble in a single game.

In the first quarter, David ended a Detroit drive with an interception at Tampa Bay's 15-yard line.

He had four tackles within two yards of the line of scrimmage or behind, including one for a loss and another for no gain.

He is the only player this season with at least 90 tackles (98), five sacks (five) and an interception (two).

In his second year from Nebraska, this is David's first career Player of the Week Award. He was named the NFL Defensive Rookie of the Month for November last season.

He is the first Buccaneers player to be named Defensive Player of the Week since RONDÉ BARBER (Week 1, 2012). David is the first Tampa Bay linebacker to be honored since DERRICK BROOKS (Week 4, 2008).

Walsh converted all four field-goal attempts and both PATs in the Vikings' 26-26 tie at Green Bay. He also had five touchbacks on kickoffs.

Walsh's 35-yard field goal in overtime tied the score at 26 and extended the game.

He converted all nine field-goal attempts during the month and is tied for the NFL lead with nine field goals in November.

In his second season from Georgia, this is Walsh's fourth career Player of the Week Award. He was honored three times last season as a rookie (Weeks 1, 15 and 17).

Walsh is tied with GARY ANDERSON and MITCH BERGER for the most Special Teams Player of the Week Awards in franchise history.

Other nominees for NFC Offensive Player of Week 12 as submitted by NFC clubs:

San Francisco wide receiver ANQUAN BOLDIN, who had five catches for 94 yards and two touchdowns in the 49ers' 27-6 win at Washington.

St. Louis rookie running back BENNY CUNNINGHAM, who rushed for 109 yards and a touchdown in the Rams' 42-21 win over Chicago.

New Orleans tight end JIMMY GRAHAM, who had five catches for 100 yards and a touchdown in the Saints' 17-13 win at Atlanta.

Minnesota running back ADRIAN PETERSON, who rushed for 146 yards and a touchdown.

Other nominees for NFC Defensive Player of Week 12 as submitted by NFC clubs:

Minnesota linebacker AUDIE COLE, who had 13 tackles and a sack.

Arizona linebacker KARLOS DANSBY, who had a 22-yard interception-return touchdown and five tackles.

Other nominees for NFC Special Teams Player of Week 12 as submitted by NFC clubs:

Tampa Bay cornerback DANNY GORRER, who blocked a punt and also forced a fumble on defense.

Carolina punter BRAD NORTMAN, who averaged 56.7 yards per punt with a net average of 46.6 yards in the Panthers' 20-16 win at Miami.