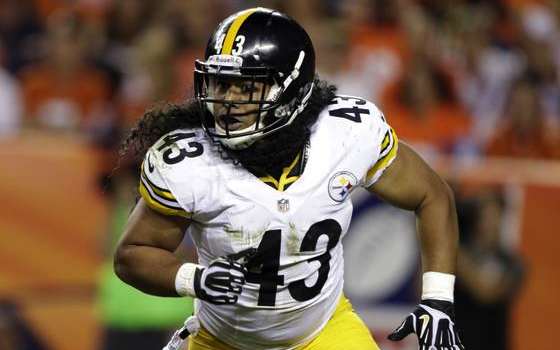 Patriots Quarterback Tom Brady, Steelers safety Troy Polamalu and Ravens kicker Justin Tucker are the AFC Players of the Week for games played the 12th week of the 2013 season

Brady completed 34 of 50 passes (68 percent) for 344 yards with three touchdowns versus zero interceptions and a 107.4 passer rating in the Patriots' 34-31 overtime win over Denver.

Engineered the Patriots' comeback from a 24-point deficit, the largest comeback win in franchise history.

The win marked the 39th time that Brady has led the Patriots to a win despite a fourth-quarter deficit or tie (including postseason).

His three touchdown passes tied for the best in the NFL in Week 12.

Posted his 38th career regular-season game with at least three touchdowns and zero interceptions. The Patriots are 37-1 (.974) in such games.

In his 14th season from Michigan, this is Brady's 24th career Offensive Player of the Week award, the second-most of any player since the accolade was instituted in 1984 (PEYTON MANNING, 25). He most recently won the award in 2012 (Week 14).

Polamalu recorded four tackles, one sack, one pass defensed, forced two fumbles and had a fumble recovery in the Steelers' 27-11 win at Cleveland.

In the second quarter, Polamalu stripped the ball from Cleveland running back CHRIS OGBONNAYA and recovered it at the Browns' 46, leading to a 32-yard field goal by SHAUN SUISHAM.

In the fourth quarter, Polamalu forced his second fumble of the game (recovered by CAMERON HEYWARD) by sacking Browns quarterback BRANDON WEEDEN.

Played a pivotal role in a Steelers defense that registered one interception, five sacks, three forced fumbles, three fumble recoveries and limited to the Browns to 367 yards of total offense.

Registered at least one sack, one forced fumble and one fumble recovery in the same regular season game for the third time in his career.

In his 11th season from Southern California, this is Polamalu's seventh career Defensive Player of the Week Award, the most of any Steeler since the accolade was instituted in 1984.

He is the first Steeler to win Defensive Player of the Week honors since IKE TAYLOR in 2012 (Week 9).

Tucker converted all four field-goal attempts in the Ravens' 19-3 win over the New York Jets.

His four field goals of 50+ yards are tied for the second-most in the NFL this season.

His 24 field goals this season are tied for the third-most in the NFL.

In his second season from Texas, this is Tucker's second career Special Teams Player of the Week Award. He previously won the award in Week 10.

Other nominees for AFC Offensive Player of Week 12 as submitted by AFC clubs:

Kansas City running back JAMAAL CHARLES, who rushed for 115 yards on 14 attempts (8.2 average) with two touchdowns in the Chiefs' 41-38 loss to San Diego.

Tennessee quarterback RYAN FITZPATRICK, who completed 30 of 42 passes (71.4 percent) for 320 yards with two touchdowns versus zero interceptions and a 109.2 passer rating in the Titans' 23-19 win at Oakland.

Cleveland wide receiver JOSH GORDON, who had a franchise-record 237 receiving yards and tied a single-game record with 14 receptions, including a one-yard touchdown catch in the Browns' 27-11 loss to Pittsburgh.

Denver running back KNOWSHON MORENO, who rushed for a career-best 224 yards on 37 carries (6.1 average) with one touchdown in the Broncos' 34-31 overtime loss at New England.

San Diego quarterback PHILIP RIVERS, who completed 27 of 39 passes (69.2 percent) for 392 yards with three touchdowns versus zero interceptions and a 127.3 passer rating in the Chargers' 41-38 win at Kansas City.

Pittsburgh quarterback BEN ROETHLISBERGER, who completed 22 of 34 passes (64.7 percent) for 217 yards with two touchdowns versus zero interceptions and a 102.2 passer rating.

Miami wide receiver MIKE WALLACE, who had five receptions for 127 yards (25.4 average) with one touchdown in the Dolphins' 20-16 loss to Carolina.

Other nominees for AFC Defensive Player of Week 12 as submitted by AFC clubs:

Tennessee linebacker ZACH BROWN, who had eight tackles and an interception.

Pittsburgh cornerback WILLIAM GAY, who had three tackles, one sack, one forced fumble and an 21-yard interception-return touchdown.

Baltimore cornerback COREY GRAHAM, who had one tackle and two interceptions.

Jacksonville linebacker PAUL POSLUSZNY, who had a team-high 14 tackles in the Jaguars' 13-6 win at Houston.

Other nominees for AFC Special Teams Player of Week 12 as submitted by AFC clubs:

Pittsburgh kicker SHAUN SUISHAM, who made both field goals (47, 32).