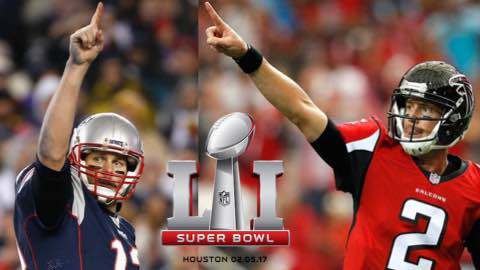 Two teams. One game. It all comes down to this as the New England Patriots and Atlanta Falcons meet in Super Bowl LI (6:30 PM ET, FOX) at NRG Stadium in Houston, Texas on Sunday, February 5th.

Super Bowl LI features the NFL's top-scoring team -- Atlanta (540 points, 33.8 points per game) -- against the team which allowed the fewest points in the league -- New England (250 points, 15.6 points per game). It marks the sixth time since the 1970 merger that the Super Bowl showcases the team that led the NFL in scoring against the club that allowed the fewest points.

"This is a really special team," says Falcons fullback PATRICK DI MARCO. "We have so many playmakers on offense, defense and special teams. This is a special time for this organization. I am super proud and super excited we are going to be playing in Houston. The ultimate goal is to win the Super Bowl -- not just get there -- and we still have a game ahead of us. We still have one more game to win."

New England advanced to its NFL-record ninth Super Bowl by defeating Pittsburgh 36-17. Atlanta defeated Green Bay 44-21 to earn its second ever trip to the Super Bowl.

"I'm proud of this team," says Belichick. "They all deserve this. It's a good, hard-working group." ​

"You never know if you'll get these opportunities in life and fortunately this team has got the opportunity," says Brady about advancing to the Super Bowl. "Now we've got to do something and go try and take advantage of it."

Brady and Montana are the only players in NFL history to be named Super Bowl MVP three times. Brady, who was the MVP of Super Bowls XXXVI, XXXVIII and XLIX, can become the first player ever to win Super Bowl MVP honors four times.

"He's the best quarterback to ever play the game," says Patriots running back LE GARRETTE BLOUNT about Brady. "He's obviously, in my opinion, the best ever."

The Patriots have won nine consecutive games and advanced to the Super Bowl with a 36-17 victory over Pittsburgh in the AFC Championship Game at Gillette Stadium. In that contest, Brady passed for 384 yards and three touchdowns, including two scoring strikes to wide receiver CHRIS HOGAN. Hogan finished the game with nine catches for a franchise postseason-record 180 yards and two touchdowns.

"I'm just happy to take advantage of this opportunity and be a part of this team," says Hogan. "This whole team has worked so hard starting in April in OTAs. We've grinded through this entire year. This is what we worked for and this is what we wanted to get to."

Patriots running back Blount, who led the NFL with a club-record 18 rushing touchdowns, added a rushing TD against the Steelers in the AFC Championship Game. Including the postseason, Blount's 19 rushing touchdowns are tied with Pro Football Hall of Famer CURTIS MARTIN (1996) for the most by a Patriots player in a single season.

The Falcons advanced to the Super Bowl for the second time in franchise history (Super Bowl XXXIII) with a 44-21 win over Green Bay in the final game at the Georgia Dome.

Atlanta, which led the NFL with 540 points scored, has won six consecutive games and is averaging 39.0 points per game over that span. The Falcons are the first team ever to advance to the Super Bowl by scoring at least 30 points in each of the club's previous six games.

Falcons head coach DAN QUINN, who is in his second year with the team, will be making his third Super Bowl appearance in the past four seasons. Quinn was Seattle's defensive coordinator in Super Bowls XLVIII (2013 season) and XLIX (2014).

Atlanta quarterback Ryan, who led the league with a franchise-record 117.1 passer rating, has continued his stellar play in the postseason with a 132.6 passer rating. Over the team's six-game winning streak, Ryan has thrown 18 touchdown passes and no interceptions for a 133.3 passer rating.

"MVP," says Falcons wide receiver JULIO JONES when asked how to describe Ryan. "He's a great player. He's a great leader on this team and he's my brother."

Ryan has thrown at least three touchdown passes in four consecutive postseason games, the first player in NFL history to accomplish the feat. In this year's playoffs, Ryan has seven touchdown passes and no interceptions.

The Falcons have spread the ball out as Ryan threw a touchdown pass to 13 different players in the regular season, the most ever in a season in league history. Among his favorite targets is Jones, who led the NFL averaging 100.6 receiving yards per game this season (1,409 yards in 14 games).

"He's a beast," says Ryan about Jones. "He's an absolute stud. I've been so lucky to play with him as long as I have."

Defensively, the Falcons are powered by VIC BEASLEY JR., who led the NFL in sacks (15.5), and a quartet of rookies -- safety KEANU NEAL, cornerback BRIAN POOLE and linebackers DEION JONES and DE'VONDRE CAMPBELL. All four rookies started in the NFC Championship Game and Atlanta can become the first team ever to start four rookies on defense in the Super Bowl. Jones (106) and Neal (105) led all NFL rookies in tackles this season.

"Every day, we are just trying to get one percent better for the guy next to us," says Poole. "Every play, we are going to give it all we've got and not let our teammates down. We're going out there trying to play ball and let people know that what we've got is serious."

Beasley, who is in his second year, had a career-high 15.5 sacks and is the first Falcons player to lead the league in sacks. During the team's current six-game winning streak, Atlanta has allowed just 19.3 points per game (27.6 points per game in the team's first 12 games).

"We feel like we have the potential to be a great defense," says Beasley. "Early in the season, we weren't playing as well but we have come a long way and now we're going to the Super Bowl." ​

Patriots vs. Falcons: Road to the Super Bowl