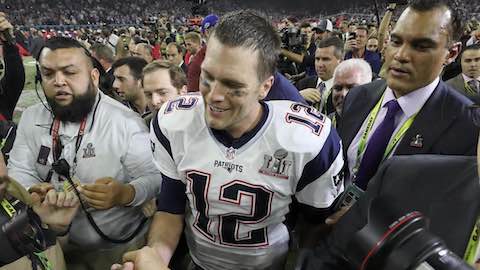 Triumphant quarterback Tom Brady lost his shirt, but the New England quarterback wore a smile, unlike those bettors who backed the Atlanta Falcons and were counting their winnings with a 25-point lead.

Tome Brady crowned his legacy as one of the National Football League's all-time best in leading the Patriots to a record-setting 34-28 overtime win on Sunday and walked away with Most Valuable Player honors for a record fourth time in his record fifth Super Bowl triumph.

"It took a kind of miraculous effort to do it and just so happy we were able to get it accomplished," Brady said about the Patriots overcoming a 28-3 third-quarter deficit for the greatest comeback ever in the NFL's postseason.

Brady's only regret was that his game jersey disappeared from his bag, something that would have been a treasured souvenir perhaps for his mother Galynn, who has been battling serious illness the last 18 months.

"I put it in my bag and I came out and it wasn't there anymore," he told a morning-after news conference on Monday.

"It's unfortunate, because that's a nice piece of memorabilia. So if it shows up on eBay, someone let me know and I'll track that down.

"Those are pretty special ones to keep. What can you do? I'll take the ring and that's good enough for me."

Jersey aside, Brady said it was certainly a brilliant night to remember.

"Football is an emotional sport," he said. "The lows of not playing great, to the highs of playing great and then at the end it was just a great way to finish.

"To celebrate with my teammates and then to see my family it's just a night I'll never forget."

It was a game made even more special because he was able to share it with his mother, an avid fan making her first appearance at one of his games this season.

"It was great, it was great. She's been through a lot, a lot harder than what I went through last night," said Brady, his voice getting heavy with emotion as he spoke about his family.

"My dad has been there every step of the way. They set such a great example for me."

Brady, 39, had dedicated the game to his mother.

"All families go through challenging times. She's been a lot of support and a lot of love, and just happy last night to be able to celebrate with her.

Brady walked out of the news conference cradling the silver football trophy he was given as MVP of the game.

"My kids will be happy to see that trophy. They always ask, 'Daddy, what about the trophy?' Now I get to bring them one home so it's pretty cool."