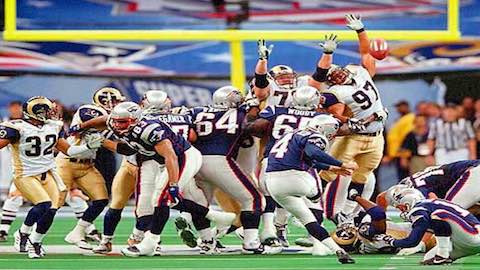 After stepping in for an injured Drew Bledsoe during the regular season, Tom Brady eventually led the Patriots to the first Super Bowl victory in franchise history over a Rams team featuring a vaunted offense. After St. Louis overcame a 14-point deficit to tie the game with just 1:30 left in the fourth quarter, Brady put together a drive of five completions in six attempts that set up Adam Vinatieri's game-winning kick (20-17) to save the game from going into overtime. Brady completed 16 of 27 passes for 145 yards and one touchdown.

Although the Rams out-gained the Patriots 427--267 in total yards, New England built a 17--3 third-quarter thanks to three Rams turnovers. After a holding penalty in the fourth quarter negated a Patriots fumble return for a touchdown, Warner scored a 2-yard touchdown run and threw a 26-yard touchdown pass to tie the game, 17--17 with 1:30 remaining. Without any timeouts, Tom Brady put together a drive of five completions in six attempts that set up Adam Vinatieri's game-winning 48-yard field goal as time expired.

The Rams outgained the Patriots 427-267 in total yards, but the Patriots forced three turnovers, which resulted in 17 points, while committing no turnovers.

Jeff Wilkins' 50-yard field goal capped a 10-play, 48-yard drive midway through the first quarter to give the Rams a 3-0 lead. The first turnover came with 8:49 left in the second quarter, when Ty Law stepped in front of an out-pattern pass intended for Isaac Bruce and raced 47 yards untouched down the left sideline into the end zone.

Late in the third quarter, Torry Holt slipped coming off the line of scrimmage, and Otis Smith intercepted Warner's pass and returned it 30 yards to the Rams' 33 to set up Vinatieri's 37-yard field goal and a 17-3 lead.

The Rams responded by driving to the Patriots' 3. On fourth-and-goal, Warner scrambled, was tackled by Roman Phifer, and fumbled. Tebucky Jones picked up the ball and raced the length of the field for an apparent touchdown, but the play was negated by Willie McGinest's holding penalty.

Warner scored two plays later to trim the deficit to 17-10 with 9:31 left. The Patriots went three-and-out on their next two possessions, giving the Rams the ball on their 45-yard-line with 1:51 left.

Warner completed an 18-yard pass to Az-Zahir Hakim and an 11-yard pass to Yo Murphy before connecting on a 26-yard touchdown pass to Proehl with 1:30 left to tie the game.

Vinatieri drilled the 48-yard field-goal attempt, marking the first time a Super Bowl game had been won on the final play. 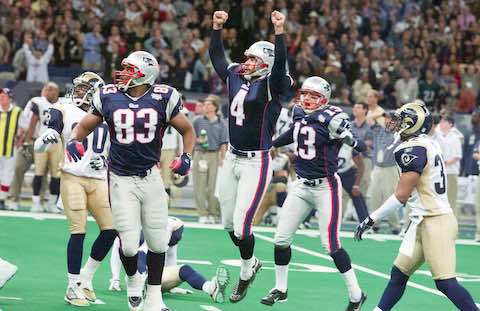 Warner finished the game with 28 completions out of 44 passes for 365 yards, 1 touchdown, and 2 interceptions, and rushed 3 times for 6 yards and a touchdown. Warner's 365 passing yards were the second highest total in Super Bowl history behind his own record of 414 yards set in Super Bowl XXXIV. Hakim was the top receiver of the game with 5 catches for 90 yards, and also rushed once for 5 yards. Faulk led the Rams with 76 rushing yards, and also caught 4 passes for 54 yards.

Brady, who earned Most Valuable Player honors, was 16 of 27 for 145 yards and one touchdown. Patriots running back Antowain Smith was the top rusher of the game with 92 yards, and caught a pass for 4 yards. Troy Brown was the Patriots leading receiver with 6 catches for 89 yards. Brown also had a 15-yard kickoff return, and a 4-yard punt return, which gave him 108 total yards.

Although the Rams outgained the Patriots 427--267 in total yards, New England forced three turnovers that were converted into 17 points. The Patriots, on the other hand, committed no turnovers. 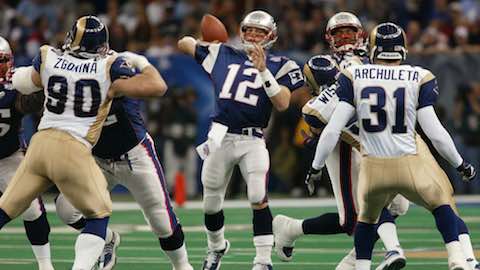 "I was laying in the locker room before the game, and I fell asleep," Tom Brady said after the Patriots' stunning 20-17 upset of the St. Louis Rams. "I woke up and said to myself, 'I didn't think I'd feel this good.' I don't know how to explain it. You just convince yourself that it's just a game. It's just another game -- even though everything leading up to it tells you how big it is."

After playing virtually error-free football for almost three quarters, the Patriots called on Brady to win the game in the final minutes of a 17-17 tie rather than conservatively killing the clock and flipping the coin in overtime.

"That wasn't even on my mind," Brady said. "I was planning to go out there and win the game."

With the Patriots having just 1 minute and 21 seconds and setting up on their 17-yard line, coach Bill Belichick could have had his emotional alter ego take a couple of knees, but he remembered Brady's young legacy of late-game theatrics, including a game-tying drive that led to an overtime win over Oakland in the divisional round.

"Tom's done it several times for us under pressure," Belichick said.

Brady completed 5 of 6 passes on the 53-yard drive, including three to J.R. Redmond. The key strike of the drive was "Max 64 All In," designed for New England's offensive line to provide maximum protection while Brady waits for receiver Troy Brown to free himself underneath. The Patriots' line played it to the max, and Brown made the catch, going out of bounds after a 23-yard gain to the Rams' 36 with 21 seconds remaining.

"We checked down a couple times then went to Troy," Brady said. "He made a great play, like he's been doing all year."

Brady next found Jermaine Wiggins for a 6-yard gain to the Rams' 30, from where Adam Vinatieri won the game with a 48-yard field goal.

"The routes made the difference, but Brady made the throws," Rams linebacker London Fletcher said looking back on the drive. "There are certain routes that can beat certain coverages ... He made the right decisions."

If the Rams' defense was surprised by Brady's late heroics, the guys running the routes knew he would be on the ball in getting it into their hands.

"You can't say enough about that kid. He has a tremendous amount of confidence; he has led this team," wide receiver David Patten said. "Maybe he doesn't have the most impressive statistics, but it doesn't matter. The kid knows how to win; he knows how to motivate other players. My hat is off to the guy."

The final game-winning drive proved a fitting climax to a season in which Brady ascended to the Patriots' starting job just two seasons after being drafted in the sixth round, the 199th pick of 2000. He finished a Pro Bowl season by completing 16 of 27 passes for 145 yards and a touchdown, numbers not normally associated with Super Bowl MVPs, but indicative of Brady's abstract value and thinking.

"Don't let other people tell you what you're capable of," Brady said. "As long as you believe in yourself and work hard to achieve whatever you set your mind to, you just keep plugging away. It may not be up to your timetable, but you can get it done."

Brady, who suffered a sprained left ankle in the AFC Championship Game against Pittsburgh, came to New Orleans not sure he would start in Super Bowl XXXVI. He'll leave with a Cadillac Escalade as the game's MVP. 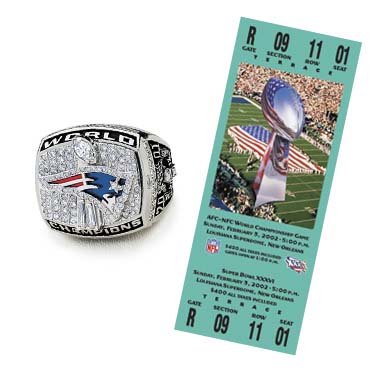