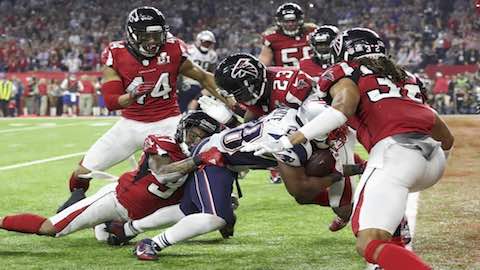 Tom Brady and the New England Patriots engineered the greatest comeback in Super Bowl history to claim a breathtaking 34-28 overtime victory over the Atlanta Falcons, cementing their status as true a NFL dynasty.

With the victory, Brady becomes the first quarterback to win five Super Bowl championships and, at 39, the second oldest at his position to win the NFL's biggest prize.

And while Brady claims each one is special, Sunday's may be the sweetest as it was his first since serving a four-game ban this season handed down by NFL Commissioner Roger Goodell for his role in the Deflategate scandal that surfaced two years ago.

Brady, Patriots head coach Bill Belichick and owner Robert Kraft shrugged off suggestions of revenge as motivation while the Patriots played the season with a massive New England-against-the-world chip on their collective shoulders.

While Brady would not qualify his titles, Kraft was clear about where Sunday's stunning victory ranks.

"Two years ago, we won our fourth Super Bowl down in Arizona and I told our fans that was the sweetest one of all," said Kraft. "But, a lot has transpired during the last two years and I don't think that needs any explanation.

"I want to say to our fans, our brilliant coaching staff, our amazing players, who are so spectacular this unequivocally the sweetest."

For Patriots fans at NRG Stadium who took massive delight in roundly booing Goodell during the trophy presentation, it was also clear this Super Bowl was something special.

Goodell, who has been conspicuous in his absence from New England's home games since the Deflategate scandal, has long been held as a villain by the team's supporters, just as outside their borders the Patriots are viewed by many as cheaters.

"Thank you to all our fans. Everyone back in Boston, New England, we love you. You've been with us all year. We're bringing this sucker home," said Brady as he raised the Vince Lombardi Trophy. "They're all sweet, they're all different.

"We've done pretty good over the last few years. We were in the AFC championship last year and won the Super Bowl two years ago so I don't think anyone is feeling bad for the Patriots."

Indeed, the Patriots have reached the playoffs in 16 of the 17 years, missing only in 2008 when Brady suffered a season-ending knee injury in his team's opening game.

Since 2002 that Patriots have five Super Bowl wins in seven trips to the championship game.

Their victory on Sunday added another chapter to the Patriots legacy as Brady engineered a jaw-dropping comeback from a 28-3 third quarter deficit to steal the title and deny Atlanta a maiden Super Bowl.

Their success has become known as "The Patriot Way," a no-nonsense approach preached by Belichick, who also picked up his fifth Super Bowl victory to move past Chuck Noll (Pittsburgh Steelers) for most by a coach.

The trophies, statistics and records accumulated over the last 15 years stamp the Patriots, love them or hate them, as an NFL dynasty.

Making their unmatched success even more impressive is it has come during the age of the salary cap which makes sustained excellence harder than ever.

"No I don't get into that," Belichick said when asked where his team ranks in NFL history. "Rank them whatever.

"Tonight we earned the championship, these guys played like champions when it counted most in the fourth quarter and overtime.

"It isn't about anything else."

The New England Patriots defeated the Atlanta Falcons 34 - 28 Sunday in overtime in the Super Bowl at NRG Stadium in Houston, TX. Matt Ryan led the game in passing, completing 17 of 23 attempts for 284 yards and 2 touchdowns. Devonta Freeman dominated the ground game with 11 carries for 75 yards and 1 touchdown. James White led all receivers with 14 receptions for 110 yards and 1 touchdown.