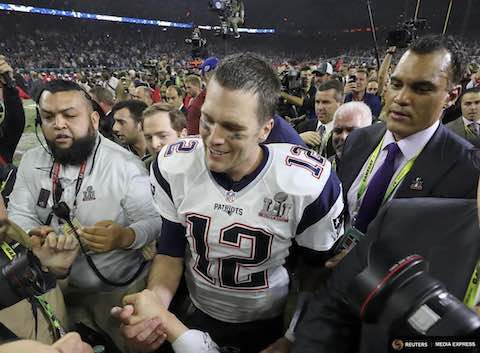 This marks the fourth time Brady has won the award, having previously been voted the Most Valuable Player in Super Bowls XLIX, XXXVIII and XXXVI. Brady is the only player in NFL history to win the award four times.

Brady has won five Super Bowls, the most by a starting quarterback in NFL history.

The Super Bowl MVP award is chosen by a panel of 16 comprised of members of the Pro Football Writers Association of America, selected members of the electronic broadcast media and by fans interactively through the National Football League's official website, NFL.com.

Brady completed 43 of 62 pass attempts for 466 yards, two touchdowns and one interception for a 95.2 rating. Brady set Super Bowl single-game records in pass attempts, completions and passing yards and is only the second player in Super Bowl history to pass for more than 400 yards in a game, joining Super Bowl XXXIV MVP Kurt Warner (414). He also extended his Super Bowl records for most career completions (207), passing yards (2,071) and touchdown passes (15).

In the first-ever Super Bowl to go to overtime, Brady, a 17th-year player from Michigan, helped New England rally from a 25-point deficit, the largest comeback in Super Bowl history.

On the opening possession of overtime, Brady orchestrated a game-winning, eight-play, 75-yard drive, culminating with a two-yard touchdown run by running back James White.

The New England Patriots defeated the Atlanta Falcons 34 - 28 Sunday in overtime in the Super Bowl at NRG Stadium in Houston, TX. Matt Ryan led the game in passing, completing 17 of 23 attempts for 284 yards and 2 touchdowns. Devonta Freeman dominated the ground game with 11 carries for 75 yards and 1 touchdown. James White led all receivers with 14 receptions for 110 yards and 1 touchdown.