Super Bowl LI: How Will Lady Gaga Use SB Spotlight? 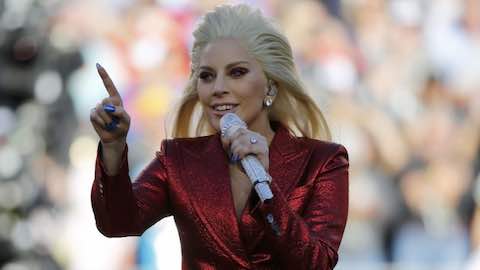 Super Bowl LI: How Will Lady Gaga Use SB Spotlight?

As Lady Gaga prepares to take America's biggest stage during the halftime show on Super Bowl Sunday, much of country is speculating whether the outspoken singer will grab the opportunity to speak out on women's rights, immigration or U.S. President Donald Trump.

As Lady Gaga prepares to take America's biggest stage at the National Football League (NFL) Super Bowl halftime show on Sunday, much of country is speculating whether the outspoken singer will grab the opportunity to speak out on women's rights, immigration or U.S. President Donald Trump.

In the past, Gaga's attention-getting performances have ranged from dressing in raw meat to taking sexual assault victims to the Academy Awards. Many viewers are well aware of that history and will watch keenly on Sunday, when Gaga headlines a 15-minute set during the NFL championship game between the New England Patriots and the Atlanta Falcons in Houston.

"People will take note of the lyrics and the political climate and come to their own conclusions," said Nolan Feeney, staff writer at Entertainment Weekly.

When it comes to the Super Bowl's 100 million-plus television audience, the 30-year-old singer may find that the safest way to make a political statement could be following in the footsteps of Beyonce, who let her music do the talking at last year's Super Bowl.

Beyonce sang "Formation," an anthem supporting the Black Lives Matter movement, accompanied by dancers dressed in homage to the Black Panthers Party of the 1960s and 70s.

Her powerful performance drew widespread praise, along with some criticism from people who perceived the song as anti-police. But their call to boycott Beyonce's music fizzled out within weeks and her album became one of the year's best sellers.

Both Gaga and the NFL have kept a tight lid on any details about her performance, which follows her drama-free singing of the U.S. national anthem at the 2016 Super Bowl.

The NFL denied reports that it had asked the singer to avoid political commentary.

"Everyone we work with understands this is a moment for families across America and the world to come together for a great experience. Lady Gaga understands that and we know she will deliver an incredible performance yet again," NFL spokeswoman Natalie Ravitz said.

If Gaga performs "Born This Way," a song about diversity that has become an anthem for the LGBTQ community, it may have larger implications especially in Texas, where lawmakers are pushing to restrict public bathroom access for transgender people.

Gaga has to be careful not to step over the line. When Houston last hosted the Super Bowl in 2004, headliners Justin Timberlake and Janet Jackson famously caused broadcaster CBS to be fined $550,000 when her breast was accidentally exposed. The U.S. Supreme Court later overturned the fine for the incident, which gave birth to the phrase "wardrobe malfunction."

"History tells us artists don't think the Super Bowl is a great place to be particularly provocative," Feeney said.

When Madonna performed in 2012, her guest star, rapper M.I.A., drew complaints for extending her middle finger. Madonna called the gesture "out of place" and the NFL sued the rapper.

Lady Gaga broke into the music industry in 2008 with pop hits such as "Just Dance" and "Poker Face" and her act featured skin-baring outfits and stunts. Over the years, her performances have grown more nuanced, and for her latest album, "Joanne," the singer toned down her physical appearance to showcase her musical prowess.

Lady Gaga has said nothing about her plans for Sunday's show. She did post a photo on social media of herself reclining across the bleachers of Houston's NRG Stadium, with the simple caption, "5 days."