Super Bowl History by the Numbers 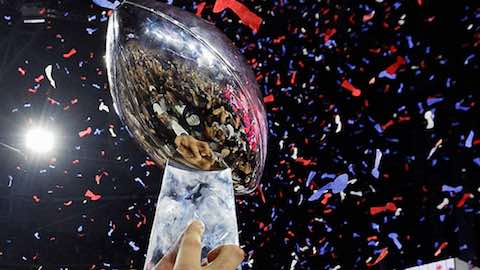 Super Bowl History by the Numbers

Nineteen different NFL teams have won the Super Bowl. The Pittsburgh Steelers (6--2) have won the most Super Bowls with six championships, while the New England Patriots (5--4), the Dallas Cowboys (5--3), and the San Francisco 49ers (5--1) have won five Super Bowls apiece. The NFC holds a 26-25 advantage over the AFC teams in Super Bowl wins.

NFL Players with the Most Super Bowl Rings

75 - Most Total Points Scored in a Super Bowl

55 - Most points scored by a team in a Super Bowl

Super Bowl XXIV when the San Francisco 49ers defeated the Denver Broncos 55 to 10. The 49ers are the only team to score at least eight TDs in a Super Bowl. The Cowboys came close in Super Bowl XXVII with 52 points (Cowboys 52, Bills 17).

45 - Biggest Blowouts in a Super Bowl

Super Bowl VII is the lowest-scoring Super Bowl to date with a total of only 21 points (3 touchdown and 3 extra points) in which the Miami Dolphins won 14-7 over the Washington Redskins.

Super Bowl 51 between the Patriots and Falcons since it required overtime after Super Bowl 51 was all knotted up at 28 at the end of regulation. The Patriots won 34-28 in overtime over the Atlanta Falcons.