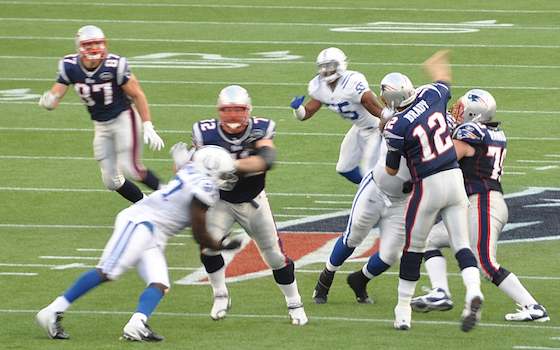 After knocking off the previously unbeaten Kansas City Chiefs last week, the Denver Broncos (9-1) try to stay atop the AFC standings when they square off against the New England Patriots (7-3) on Sunday Night Football. New England leads the AFC East by two games and the Patriots are 5-0 at home.

This marks the 14th time in their careers, including the postseason, that quarterbacks Tom Brady and Peyton Manning will meet. Brady has guided the Patriots to nine wins in those meetings over Manning's Colts and Broncos. Also, this is the first game in NFL history in which both starting quarterbacks are at least 90 games over .500 in the regular season. In their careers, Brady is +101 (143-42) and Manning is +92 (163-71).

The Broncos lead the NFL with 398 points scored -- the third-most ever by a team through the first 10 games of a season -- and Manning has passed for a league-best 3,572 yards and 34 touchdowns.

"This is one of those games that you treasure because you know that the end of this string is coming," analyst Cris Collinsworth said on NBC Sports Radio. "But it's amazing now this is the 14th time they've played and every one of them feels like it's been significant. That's quite a tribute to these two guys and their careers."

A victory over Denver would guarantee the Patriots a record of .500 or better for the 13 consecutive year. The Patriots are the only team in the NFL to finish with a record of .500 or better in each of the last 12 years (2001-12). Each of the other 31 NFL teams had at least one losing season between 2001 and 2012. Since the 2010 season, the Patriots are now a combined 24-2 in the second half of the regular season. Since Bill Belichick became Patriots head coach in 2000, New England is 84-22 in the second half of the season.

Last week, the Patriots traveled to Carolina for a Monday Night Football matchup with the Panthers and dropped to 7-3 on the season after a 24-20 loss.

Carolina QB Cam Newton threw his third touchdown of the night with a 25-yard pass to WR Ted Ginn, Jr. with 59 seconds left. Newton drove the Panthers 83 yards on 13 plays for the go-ahead touchdown, but the Patriots still had a chance to get the win.

Brady moved the Patriots to the Carolina 18-yard line and fired a pass into the end zone on the final play. The pass was intercepted by S Robert Lester, but the officials threw a flag after it appeared that LB Luke Kuechly had interfered with TE Rob Gronkowski by grabbing him with both hands. The officials quickly gathered together and waved off the penalty and the game ended.

Last week, the Denver Broncos defeated the previously undefeated Kansas City Chiefs 27-17 in a game that boasted the highest winning percentage (.944 / 17-1) for a game 11 weeks into the season since the 1970 NFL-AFL merger.

Peyton Manning was 24-of-40 for 323 yards with 1 TD pass and no interceptions; wide receiver Demaryius Thomas reeled in 5 receptions for 121 yards; and Rookie running back Montee Ball scored two touchdowns (1-yard and 8-yard carries).

The victory gave Denver its ninth consecutive win over AFC West opponents as the Broncos improved to 9-1 and moved to the top spot in the division.

Peyton Manning and the Denver Broncos appear to be the team to beat in the AFC and, perhaps, the NFL. Their victory over the Chiefs was a solid victory; but it wasn't a signature victory. Granted, the Broncos earned the win thanks to solid play on both sides of the ball. However, it seemed as if the Chiefs were suffering from not-ready-for-primetime jitters more than anything else.

No doubt this game will be close. It should come down to which offense will be better able to establish its running game in order to be effective with their respective play-action passing games.

The Broncos have been dominant at home, but much less so on the road. On the road, Denver is 3-1, with two of their three wins coming by 3 and 8 points over the Cowboys and Chargers. The Patriots are just as dominant as home, where they are undefeated this season as well.

Also, factor in that the Broncos have played a much softer schedule than the Patriots this season.

Brady was cheated out of a game-winning drive against the Panthers last week; He won't be cheated this week against the Broncos.

Expect Brady to march the Patriots down the field with less than two minutes to go for the game-winning field goal as this game comes down to which offense will have the last possession of the game.

The biggest game of the NFL Week 12's slate is the Sunday Night Football showdown between the Broncos and Patriots, as Peyton Manning and Tom Brady face off for the 14th time in their Hall of Fame careers