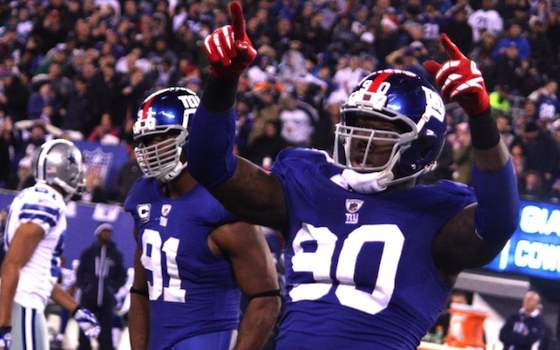 Buccaneers Running back Bobby Rainey, Giants defensive end Jason Pierre-Paul and Eagles punter Donnie Jones are the NFC Players of the Week for games played the 11th week of the 2013 season

Rainey rushed for 163 yards and scored three touchdowns (two rushing, one receiving) in the Buccaneers' 41-28 win over Atlanta.

Playing in just his 10th career game, Rainey is the first player since EDGERRIN JAMES (November 21, 1999) to record at least 150 rushing yards, two rushing touchdowns and one receiving touchdown in a single game in a player's first 10 games to begin a career.

In the past 10 seasons, Rainey is one of only four players with at least 160 rushing yards, two rushing touchdowns and a receiving touchdown in a single game. The others are LA DAINIAN TOMLINSON (October 29, 2006), CHRIS JOHNSON (September 20, 2009) and DARREN MC FADDEN (October 24, 2010).

Rainey is the first player in franchise history with at least two rushing touchdowns and one receiving touchdown in the same game.

In his second season from Western Kentucky, this is Rainey's first career Player of the Week Award.

He joins WARRICK DUNN (1997) and DOUG MARTIN (2012) as the only Buccaneers running backs to be named Player of the Week in their first season with the team.

Pierre-Paul had an interception-return touchdown and three tackles in the Giants' 27-13 win over Green Bay.

With 10:49 remaining in the fourth quarter and the Packers looking to tie the game, Pierre-Paul helped extend New York's lead from seven to 14 points with a 24-yard interception-return touchdown.

Pierre-Paul is the first Giants defensive lineman with an interception-return touchdown in back-to-back seasons since MICHAEL STRAHAN (1998-99).

All three of Pierre-Paul's tackles occurred within one yard or behind the line of scrimmage.

In his fourth year from South Florida, this is Pierre-Paul's third career Player of the Week Award. He was previously honored twice in 2011 (Weeks 14 and 16).

Pierre-Paul joins Pro Football Hall of Famer LAWRENCE TAYLOR (nine) and MICHAEL STRAHAN (five) as the only Giants to be named Defensive Player of the Week at least three times.

Jones punted six times and averaged 50.7 yards per punt in the Eagles' 24-16 win over Washington. He placed four of his six punts inside the 20-yard line and didn't allow a single return yard (50.7-yard net average).

His 50.7-yard net average is the highest in team history (minimum four punts).

Jones placed two punts inside the five-yard line, including a 70-yard punt with 3:26 remaining in the game to pin the Redskins at their own four-yard line to begin their final drive.

In his 10th season from Louisiana State, this is Jones' first career Player of the Week Award.

He is only the second Eagles punter to be named Player of the Week, joining SEAN LANDETA (Week 13, 2001).

Other nominees for NFC Offensive Player of Week 11 as submitted by NFC clubs:

Arizona wide receiver MICHAEL FLOYD, who had six catches for 193 yards and a touchdown (91 yards) in the Cardinals' 27-14 win at Jacksonville.

Seattle running back MARSHAWN LYNCH, who scored three touchdowns (two rushing, one receiving) in the Seahawks' 41-20 win over Minnesota.

New York Giants quarterback ELI MANNING, who completed 25 of 35 passes (71.4 percent) for 279 yards with one touchdown and one interception for a 92.4 passer rating.

Chicago quarterback JOSH MC COWN, who completed 19 of 31 passes (61.3 percent) for 216 yards with one touchdown and no interceptions for a 92.9 passer rating in the Bears' 23-20 overtime win over Baltimore.

Carolina quarterback CAM NEWTON, who completed 19 of 28 passes (67.9 percent) for 209 yards with three touchdowns and no interceptions for a 125.4 passer rating in the Panthers' 24-20 win over New England. He added 62 rushing yards.

Arizona quarterback CARSON PALMER, who completed 30 of 42 passes (71.4 percent) for 419 yards with two touchdowns and no interceptions for a 119 passer rating.

Seattle quarterback RUSSELL WILSON, who completed 13 of 18 passes (72.2 percent) for 230 yards with two touchdowns and no interceptions for a 151.4 passer rating.

Other nominees for NFC Defensive Player of Week 11 as submitted by NFC clubs:

Philadelphia linebacker CONNOR BARWIN, who had six tackles, a sack and a forced fumble.

Carolina linebacker THOMAS DAVIS, who had a game-high 17 tackles.

Seattle cornerback WALTER THURMOND, who had a 29-yard interception-return touchdown and three tackles.

Other nominees for NFC Special Teams Player of Week 11 as submitted by NFC clubs:

Chicago kicker ROBBIE GOULD, who converted all three field-goal attempts, including the game-winning 38-yarder in overtime.

New Orleans kicker GARRETT HARTLEY, who converted all three-field goal attempts, including the game-winning 31-yarder as time expired, in the Saints' 23-20 win over San Francisco.

Tampa Bay linebacker DEKODA WATSON, who blocked a punt that led to a touchdown.